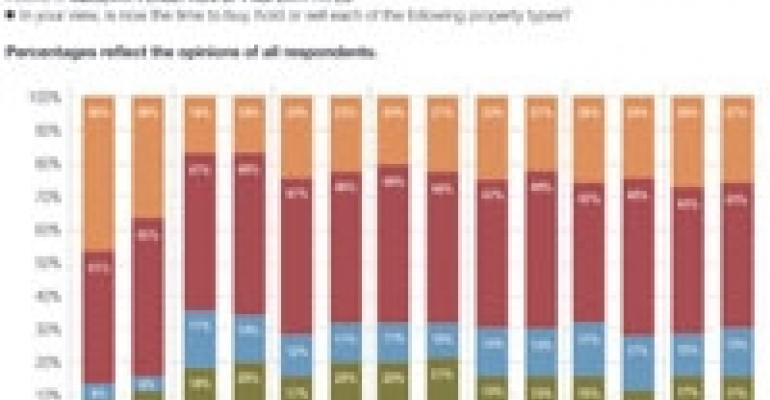 Apartments remain the favored property type among risk-averse investors. Nearly half of respondents (46%) to a quarterly survey conducted by National Real Estate Investor, Retail Traffic and Marcus & Millichap Real Estate Investment Services indicate that now is the time to buy apartments, up from 38% in the second quarter.

Demand for apartments is even stronger among respondents who are already invested in that particular property type with 61% of apartment investors saying now is the time to buy more multifamily product.

Investors are less confident in other sectors expressing the most interest in buying undeveloped land (28%), followed by retail (26%), and industrial (24%). Respondents were most bearish on hotels with only 18% indicating now is the time to buy Figure 3.

Apartments have not escaped the current downturn unscathed. The sector reported its weakest net absorption totals for the second quarter in more than a decade with just 900 units absorbed, according to real estate research firm Reis based in New York.

The national vacancy rate also rose to 7.6%, up 150 basis points over the same period a year ago. Yet the apartment sector may be a preferred choice simply because it has fared better than property types such as the office market, which reported a national vacancy rate of 15.9% in the second quarter.

Investors also appear more confident that effective rents for apartments will hold their own going forward, indicating the worst of rent adjustments is over. Nearly half of respondents (47%) believe rents will remain flat, 27% anticipate an increase and 23% predict a decline.

Those that do expect a dip in effective rents anticipate a 1% drop, which is well below expectations for other sectors such as office (5.2%), retail (5.1%), and mixed-use properties (5.1%).

More than half of respondents (55%) believe distressed properties will be most widespread among retail malls, followed by hotels (53%), suburban office (48%), undeveloped land (42%), and retail lifestyle and power centers (40%).

Yet it could be early 2010 before a significant amount of distressed properties make it into the marketplace. The process required to re-price, re-tenant or write off those distressed assets is going to be complex.

“There’s a lot of emphasis on workouts by commercial banks who are not yet strong enough to withstand another round of large losses,” says Hessam Nadji, managing director at Marcus & Millichap. CMBS loans have an added layer of complexity due to the very nature of the securitized model. “All of this points to a very different situation than the 1990s, when the Resolution Trust Corp. acted as a clearing house of distressed real estate,” Hessam adds. “Either way you look at it, I think you will see that turning point occur in the next six to 12 months.”