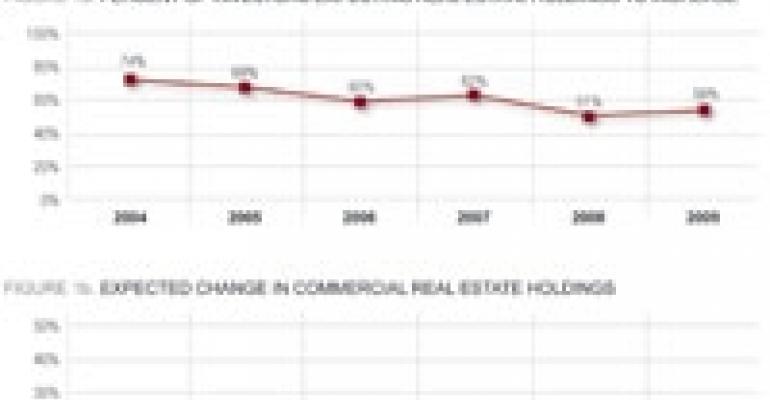 Is A Market Bottom Imminent?

Investors sidelined by the lingering effects of a deep recession and capital crunch are preparing to jump back into the commercial real estate market. According to an exclusive quarterly investor survey, 70% of investors indicate they are currently amassing capital in preparation for the right buying opportunity.

On average, investors have amassed $18.2 million for acquisitions. The online survey of 521 property owners was conducted in August by National Real Estate Investor and Marcus & Millichap Real Estate Investment Services.

One-third of respondents expect investments to remain the same, while 10% of investors indicate that their real estate portfolios will likely decrease over the next 12 months. Among those who plan to boost their real estate holdings, the average increase is a modest 12.2%.

The latest investor sentiment pales in comparison to the results of the fall 2004 survey when 78% of respondents expressed their intent to increase their commercial real estate investment over the ensuing 12 months Figure 1. “The recent numbers show positive movement, and we are seeing more buyers and sellers wanting to execute transactions as the pricing gap begins to narrow. The major obstacle is financing,” says Hessam Nadji, managing director at Marcus & Millichap.

The impact of the pricing gap and credit crisis are reflected in the steep decline in transaction volume over the past year. During the first seven months of 2009, roughly $22.4 billion in commercial real estate properties traded hands — about one-fourth of the $99 billion in property sales during the same period in 2008, according to New York-based Real Capital Analytics. Yet investors are clearly posturing to make a move.

Jobs remain key
Caution remains paramount as investors wait for more definitive signs that the economy has hit bottom before they pull the trigger on acquisitions. A key indicator investors are watching closely is employment data. “Job growth is the basis to fuel spending in all other sectors,” writes one respondent.

The U.S. economy shed 216,000 jobs in August, which is an improvement over the 270,000 jobs lost in July and 442,000 jobs lost in June. Still, the mounting job losses weaken demand for commercial real estate space and pose a major concern for potential buyers. The U.S. has lost some 6.9 million jobs since the start of the recession in December 2007.

Nearly four in 10 respondents (37%) expects a return of job growth within 13 to 18 months, while 21% expect a growth in employment to occur within seven to 12 months. Only 2% of respondents expect to see job gains within the next six months.

Typically, the commercial real estate sector lags behind the national economy by six to nine months, Nadji notes. “Therefore the job losses that continue, even though at a lower pace, will mean further pressure on occupancies and rents well into the second half of 2009 and the first quarter of 2010,” he says. Nadji anticipates that it may be the second quarter of 2010 before the real estate fundamentals hit bottom.

Rents, values still suffer
Investors are less optimistic about the outlook for effective rents than they were in the spring survey. Results vary depending on property type, but between 32% and 52% expect effective rents to be lower a year from now Figure 2. In the April survey, between 23% and 38% anticipated a further drop in effective rents.

Respondents to the latest survey expect the office market to suffer the biggest blow with effective rents projected to fall 5.2% over the next 12 months, followed by mixed-use and retail (5.1%) and industrial (3.9%).

Looking directly at expectations for future values the majority of investors anticipate that values will remain flat or experience a further decline over the next six months. The largest percentage of respondents (44%) believe that hotels are most likely to experience a decline in values, followed by office (40%), retail (39%), and mixed use (37%). The most optimistic are apartment investors, as one in five expects values to begin increasing over the next six months and an additional 50% expect the values to remain the same.

There is no doubt that this was one of the most severe economic downturns that the U.S. has experienced in modern history. “We still face the drag from deleveraging, banks’ troubled assets and cautious consumers. But, the good news is that it looks as though the worst is over,” Nadji says. One encouraging factor is that there is a lot of capital on the sidelines. “Once confidence improves, the effect of that capital coming into the economy could be very positive,” he adds.

In addition, there has already been significant discounting in prices to attract buyers. Cap rates averaged 7.7% in July, up from 6.9% a year ago, according to RCA. However, it is important to note that this trend is based on closed transactions, of which there have been far fewer in the past year than is the industry norm. “Once buyers have conviction that the economic cycle has bottomed and credit markets improve even moderately,” explains Nadji, “we will see a more sustainable recovery in investment activity.”