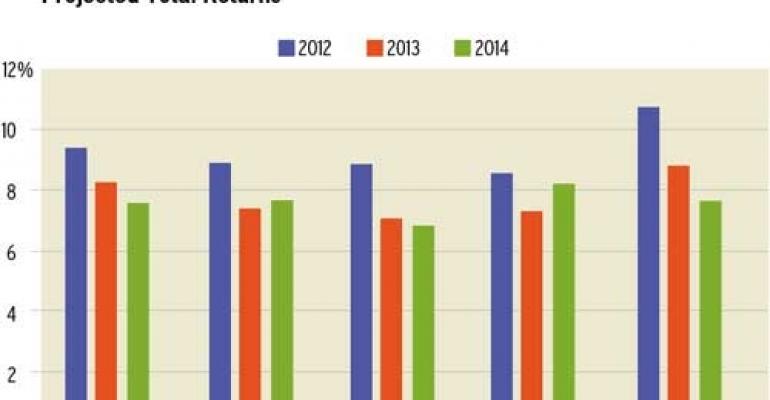 The Pension Real Estate Association’s most recent consensus forecast survey indicates investors are expecting total returns of 9.3 percent in 2012—a 140 basis point increase from what the survey indicated three months ago.

PREA surveys a subset of its member firms about their forecasts of the U.S. commercial real estate markets as represented by the NCREIF Property Index (NPI). PREA surveyed 22 firms in the first quarter, representing investment managers, advisors and researchers.

While the expected returns figure is up from the previous quarter, it is in line with the long-term average return to the NPI. According to PREA all four property types saw their average forecast return for 2012 improve from last quarter’s survey. But despite of the increased bullishness for 2012, the average forecast still predicts a gradual slowing in returns through 2013 and 2014.

Respondents expect the retail and office sectors to each return 8.9 percent. Industrial, at 8.4 percent, was the laggard.

According to PREA, “Overall, forecasters are predicting a year with returns down significantly from last year’s excellent results but see good, if not exceptional, returns for 2012. After this year, however, a further slowing is predicted with returns at levels below the long-term average over the next two to five years.”