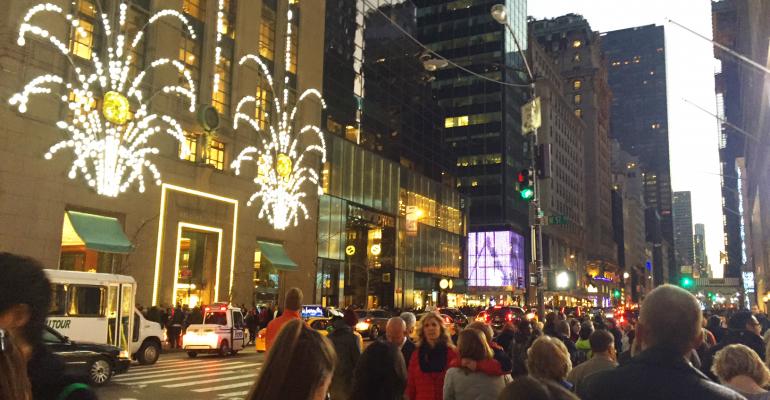 Expectations Are Tempered for Brick-and-Mortar Retail, In Spite of Strong Holiday Season

The challenges in the retail sector are structural rather than related to consumer spending, according to a recent Cushman & Wakefield webinar.

The numbers for 2017 are in: It appears the holiday shopping season was a success. But will this translate to a revival for bricks-and-mortar retail in 2018?

The short answer is that it depends. That was the message during real estate services firm Cushman & Wakefield’s recent webinar on the topic, hosted by Garrick Brown, head of retail research for the Americas, and Ben Conwell, senior managing director and e-commerce advisory group lead.

There are positive economic indicators underpinning the state of retail, including high consumer confidence, wage growth and low unemployment. This could stem the tide of strategic closures, Brown said.

However, Amazon and other e-commerce players are also taking up more and more market share. This signals that challenges in the retail sector—evidenced by retailer bankruptcies and store closings—are structural rather than related to consumer spending, Brown said. While today’s economics may benefit many retailers, “they’re not going to help those with truly deep structural issues,” he noted.

Still, the most recent holiday shopping season was encouraging, as there was a 5.5 percent boost in total retail sales from the year before. “It’s the strongest increase we’ve seen since 2005,” Brown noted, a year which saw such retail success translate into commercial real estate demand. This increase is the biggest year-over-year since the first quarter of 2012, according to real estate services firm CBRE.

The results for 2017 were mixed among individual retailers. For example, GameStop saw a 13.7 percent growth in holiday sales from the year before, and Costco saw 9.1 percent growth in December only. However, retailers like dressbarn and Barnes & Noble experienced sales declines of 13.0 percent and 6.4 percent respectively.

“There are a fair amount of mainstream chains that are still facing challenges,” Brown said. Large commodity retailers are feeling these challenges the most, he added. While there have been a wave of retail bankruptcies and store closures—Toys ‘R’ Us recently announced shutting down at least 100 stores—not all retailers are shrinking: “Discount stores remain white hot,” Brown noted as an example.

While there was overall growth in retail sales, online sales grew even more. There was 14.7 percent growth in online spending during the holiday season last year compared to the year prior, which translates to $108 billion in online spending, Conwell said.

Recent figures from CBRE also underscore the overall strength of retail during the holidays, as well as the discrepancies within sub-sectors. For example, overall net absorption for the fourth quarter totaled 3.1 million sq. ft. But because of rising store vacancies, the lifestyle and mall segment saw negative net absorption during the period. There was also positive rent growth in the fourth quarter of 2017, with the exception of the lifestyle center and mall sub-sectors, where rents fell 0.9 percent from the quarter prior. Still, even for that segment of retail real estate, rents are up 6.5 percent since 2012.

The numbers do show there are still challenges confronting bricks-and-mortar stores. The growth rate for total retail sales in the U.S. has been consistent every quarter and so has the rate for e-commerce sales, Conwell said. Still, online shopping accounts for about 10 percent of unadjusted total retail sales and may reach 12 percent or more in a few years, Conwell said. “We forecast that over the next couple of years that steady increase will continue,” he said.

Online giant Amazon in particular continues to take a bigger share of the retail pie and is the best at converting website visits into transactions, Conwell said. Walmart, which had strong holiday sales and the largest physical footprint, has increased its share of visits the most among the top 50 retailers by transaction volume, but still lags behind Amazon in this regard, he noted.

President Donald Trump’s tax reform could also affect the state of the retail sector this year. On the one hand, some retailers may benefit from the lower corporate tax rate, Brown said. But for truly challenged retailers, the tax cuts won’t make much of a difference. “Thirty-five percent of nothing versus 20 percent of nothing—the math is simple,” Brown said.