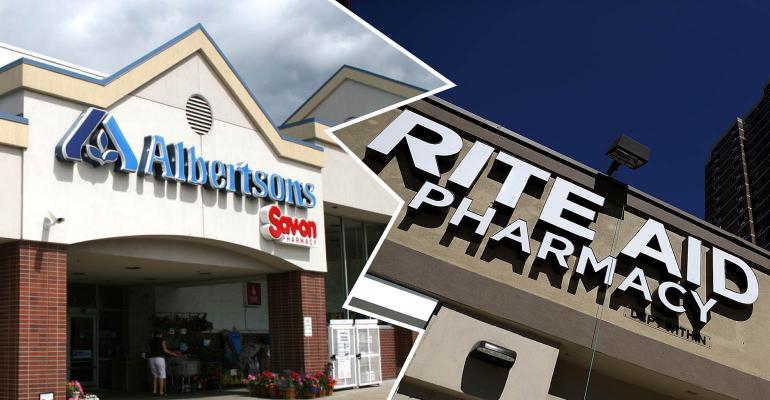 Industry professionals who have studied the companies’ operations are not convinced that the combination will create an entity strong enough to compete against Amazon.

Grocery chain Albertsons Co. and drug store operator Rite Aid announced plans on Tuesday for a merger estimated to be worth $24 billion. The transaction will feature a stock and cash exchange between the companies’ shareholders that would allow the grocery store operator to go public smoothly after 10 years of private ownership.

Company executives optimistically unveiled plans for a combined retail company that would have 4,892 stores and 4,345 pharmacies with market leadership in 66 percent of the country’s top MSAs, according to a presentation explaining the details of the deal.

Executives also expect the combined company to produce $83 billion in revenue for 2018, and what they called “robust free cash flow” and valuable owned real estate.

Industry professionals who have studied the companies’ operations closely, however, are not convinced that the combination will create an entity strong enough to compete as a heavy hitter against sector leaders Walgreens and Amazon.

“There is no precedent in the last 10 years of two weak competitors joining and making a better entity,” says Kurt Jetta, CEO of TABS Analytics, a Shelton, Conn.-based consumer analytics firm. “Usually, it drags both of them down and they’re both weak competitors.”

In the merger, the Boise, Idaho-based Albertsons is gaining the remaining 2,500 Rite Aid locations that Walgreens Boots Alliance relinquished so that it could receive final approval to buy 1,932 Rite Aid stores for about $4.3 billion.

But the combined entity faces struggles with unprofitability, misdirected efforts to run an e-commerce operations on the grocery store side and a drug store that is in third position nationally.

“The key to success in grocery is geographic concentration,” Jetta says. “[Albertsons] needs to have a market-leading concentration. Currently, they have a really broad sprawl across the country, and they don’t do well in any of their markets.”

Another weak point for Albertsons, in Jetta’s view, is its agreement with Instacart, a service that offers same-day grocery deliveries in as little as one hour. In the agreement, Instacart customers will have access to Albertsons’ banner stores across key markets, according to a company statement. Although many retail experts believe companies should incorporate e-commerce operations where they can, Jetta said that the move would just make matters worse for Albertsons because the e-commerce model is not ideally suited to groceries.

“Nobody really has cracked the code, and Amazon certainly hasn’t,” he notes.

Meanwhile, Rite Aid has been a laggard in the drug store sector, with its third-place position among the country’s drug store operators. Jetta says the Camp Hill, Penn.-based company struggles with the same issue of sprawl as Albertsons.

“It’s not so much that they [Rite Aid] were bad operators, but … they did not have great locations. They are kind of mirror images of one another as far as performance in particular classes of trade,” he notes.

In addition to the sprawl, TABS Analytics found that Rite Aid has a problem with its inventory management. The company’s worst performing stores had enough inventories to sit on the shelves for centuries—not decades or years.

Strength from coast to coast, but scarcely in between

Yet the two companies do mirror each other in one aspect, and it could provide a clue as to how they can regain focus and operate more efficiently: Their stores tend to flourish in markets that book-end the country, including Los Angeles, Philadelphia and Baltimore. Most of Rite Aid’s stores are going to be in the Northeast and on the West Coast, according to John Feeney, a vice president with Northbrook, Ill.-based The Boulder Group, a boutique net lease brokerage firm.

Indeed, Jetta says the most rewarding approach for the combined company, operationally, would be to focus on improving stores in the Northeast Corridor and on the West Coast.

“You have several thousand stores in the Southeast and the Midwest that are all just dragging down their overall efficiency and profitability,” he notes. “Get rid of everything, sell it off and concentrate in Northeast and West Coast. Geographic concentration is essential to success.”

Grocery stores have been trading at low cap rates recently, in keeping with the current stage of the net lease market, where property pricing is at an all-time high, Feeney says.

The situation in the drug store sector cap rates have been a bit more varied, due to the Walgreens-Rite Aid merger. Also, the sector has seen slight increases in cap rates in recent quarters. Overall, however, drug stores are probably near historic lows in terms of cap rates. The median asking cap rate for Walgreens locations built from 2011 to 2017, for instance, is around 5.5 percent. Rite Aid stores, particularly those built between 2005 and 2010, command a cap rate of around 7.0 percent, according to The Boulder Group’s Q4 2017 net lease market report.