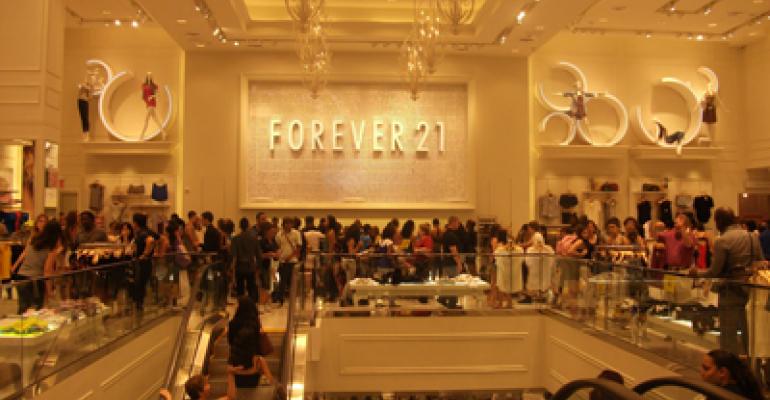 Forever 21 Looks to the Beauty Segment with New Concept

A connection to social media and experience is what some experts are saying is a smart move for the retailer.

Take a quick scroll through the Instagram account of Riley Rose—the new beauty and lifestyle chain created by apparel retailer Forever 21—and you will be inundated by pink color, glitter and aesthetically pleasing photos of products to try and purchase.

The account reflects what visitors will experience when they enter a Riley Rose store. The first of 13 to open in General Growth Properties’ (GGP) shopping centers around the country appeared recently at Glendale Galleria in Glendale, Calif.—which, from the looks of it, is as Instagram-ready as many of its products.

In an age where apparel retailers are taking a hit from the rise of e-commerce shopping, it’s this connection to social media and experience that some experts are saying is a smart move for the retailer, which generally caters to young women. In fact, the chain already has a social following and one physical store open, but it has yet to launch an online web shop.

So far this year, there have been 6,121 major U.S. store closure announcements, according to a weekly tracker from Fung Global Retail & Technology, a research firm. That is a 203 percent year-over-year increase. Teen apparel retailers are among those closing locations, as rue21 announced it would close 400 stores, Wet Seal said it would close 171 stores and American Apparel also said it would shutter 110 stores, according to the tracker. However, there is also a 54 percent year-over-year increase in store openings, as so far in 2017, there have been 3,467 major U.S. store opening announcements. Ulta and Sephora are among the retailers opening stores, with 100 and 70, respectively, along with the 10 Riley Rose stores.

Apparel retailers in general have been struggling, says Anne Brouwer, a senior partner at McMillan Doolittle, a retail consulting firm. The teen apparel segment that Forever 21 occupies saw huge growth in the late 1990s and early 2000s, but many of those retailers are not so healthy today, Brouwer says. Compounding the issue is the fact that discretionary spending has changed, especially among millennials who grew up during the recession and have different attitudes about spending, Brouwer says.

With the rise of other fashion retailers like H&M and Zara—H&M has opened 43 stores net in the U.S. in the first nine months of this year, according to Fung Global Retail & Technology—Forever 21 had to diversify, Lushing says.

And it seems that a social media-heavy, experience-focused concept may have been the way to go.

The goal for retail properties is to create a dynamic environment for shopping and socializing, says Joseph Coradino, CEO of PREIT, which leases space to Forever 21 in six of its properties, in an email. “Homogenous retail offerings are not going to capture market share,” he says. For example, Nordstrom is launching Nordstrom Local, which will have a greater focus on customer experience. The stores won’t have merchandise, but will have services like quick pick-up and online orders and tailoring, Coradino says. “Amid a quickly changing retail environment, taking risks can create new opportunities for consumers to rediscover the shopper experience,” Coradino notes.

In announcing the launch of Riley Rose in May, Sandeep Mathrani, CEO of GGP, said that customers expect lifestyle offerings. “Millennials have embraced the Forever 21 brand, and GGP is thrilled with the introduction of Riley Rose. We know our shoppers will enjoy it,” he said.

Still, while there are some chains starting to offer more services and experiences—yoga apparel retailer Lululemon offers in-store yoga classes, for example—it’s not yet the norm, Brouwer says: “I think it’s happening. It’s just not at mass.”

A beauty and lifestyle focus—Riley Rose will also offer home décor and other accessories—that targets millennials and Gen Z shoppers may also work in the store’s favor. PREIT’s 2016 shopper survey found that 78 percent of shoppers between the ages of 18 to 24 prefer to shop and socialize at a mall, Coradino says. Ulta and Sephora stores are staples among beauty shoppers, but those retailers tend to cater to older audiences, Lushing says. “There’s really nobody looking out for the juniors, and juniors like to have their own experience,” Lushing says.

Beauty stores are also still flourishing. “In-store product trials and interactions with makeup artists and experts are appealing to customers and aren’t replicated online—enabling this this sector to favor brick-and-mortar,” Coradino says.

It’s these experiences that are helping beauty to grow in retail, says Jessica Wolfe, a principal in the consumer products and retail practice of global strategy and management consulting firm A.T. Kearney.

Nyx stores, for example, have been successful and provide tutorials and technology in the stores, allowing customers to take selfies. Riley Rose also taps into the millennial desire to post photos on social media—not only of the Barbie dollhouse-aesthetic of the store, but of themselves for feedback from followers or to show off, Wolfe says. Riley Rose’s tagline on the store’s Instagram page is “Everything u want & love for a curated lifestyle.”

It’s also helpful that Riley Rose doesn’t have—yet—its own branded line of make-up, unlike other stores branching into beauty, like Topshop, Wolfe says. Instead, Riley Rose offers up to 200 brands—some not yet household names—in a range of prices, which might cater not only to Forever 21’s base of shoppers, but also older shoppers who may usually buy more established make-up brands, like Stila. “It feels like it’s being more curated for you, and you have the opportunity to really pick and choose,” Wolfe says.