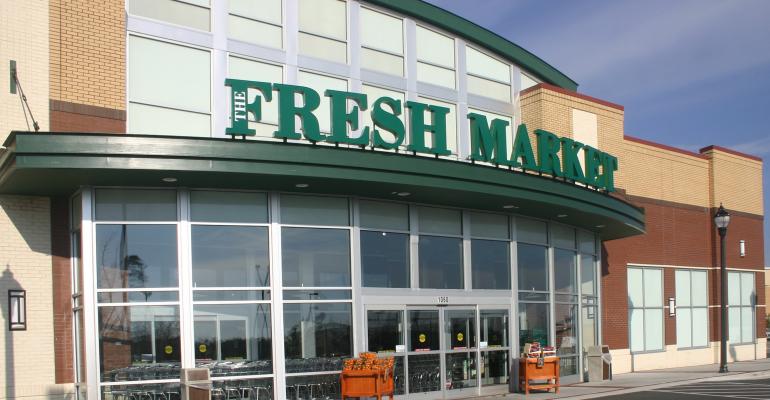 Fresh Market Spruces Up Amid Word that Kroger Wants to Buy

Is Kroger Co. targeting The Fresh Market for expansion? The Cincinnati-based company, which is the largest supermarket chain in America, is set to report its fourth quarter earnings on Thursday, but of all the corporate priorities discussed, investors are sure to devour any insights the company serves up about a potential acquisition of The Fresh Market, a specialty grocer based in Greensboro, N.C.

News surfaced in February that Kroger was in talks to acquire Fresh Market, and was in the second round of an auction that had attracted other companies and private equity firms. The Fresh Market is said to be exploring a sale, and based on analyst’s observations, it might make an attractive prospect for any grocery peer or other company looking to add a supermarket chain to its portfolio.

Based on fiscal 2014 data, the most recent full year data available, Fresh Market had some of the grocery business’ best gross margins at 33.9 percent; operating margins at 7.3 percent; and it even topped Whole Foods with an EBITDA margin of 10.7 percent, according to an analysis from research firm Jefferies.

The opportunity for an acquisition is underscored with notes of caution, however, as Fresh Market has lost its wide competitive edge over other grocers who lagged in offering organic and specialty foods.

“Today’s food retail customer has many more choices available to them than five years ago,” Rick Anicetti, CEO of The Fresh Market, said in the company’s third quarter earnings call last year. Not only is competition tougher, but analysts point out that Fresh Market is a brand waiting to be defined.

“It doesn’t tout organics, it doesn’t overtly tout healthy eating and it does not stress low prices,” Mark Wiltamuth, an equity analyst for Jefferies, wrote in a research note about the company.

A look at Fresh Market’s recent history and analyst opinion certainly paints a picture of a company determined to turn itself around. At the very least, the chain recently implemented a turnaround plan designed to help it stand out amid a growing number of competitors for customers seeking organic foods and specialty items.

Company officials developed a four-part plan to elevate the status of the brand over other grocers. The Fresh Market has a few core operational issues to sort out as well. One area where the retailer stumbled recently was a store expansion plan that was not adequately supported by effective systems and processes, Anicetti said. Currently, the company operates 183 stores in 27 states, but it has failed in its recent effort to expand into California. To pull this off, according to Anicetti, the company will focus on four areas of improvement: its operating effectiveness, value equation, brand differentiation and customer engagement.

Anicetti believes the company can increase its profit margins by 200 to 300 basis points from productivity and operational changes, and that doing so will free up the funds for needed improvements.

Large supermarket chains have caught up to the tactic of offering customers organic foods, so Fresh Market plans to differentiate its stores from the competition by emphasizing quality and freshness in its perishables departments, and reinvent its center store area with a remodeling program, Anicetti said. It will also boost the effectiveness of its promotions by putting a sharper focus on fewer items, he said. Finally, Fresh Market wants to increase its engagement with its customers, and develop a dialog with them both inside and outside of the stores.

“We must begin to own a greater share of our guests’ minds and compete more effectively with the noise of the marketplace,” Anicetti said.

At first glance, it looks like the plans to set Fresh Market back on course could position it well for a potential buyer, Kroger or otherwise.

“After factoring in our assumptions for corrective measures and a lower earnings outlook in 2016, we estimate free cash flow of $61 million in 2016,” Wiltamuth wrote. “This free cash provides a powerful lever for creating shareholder value through either reinvestment back into the business or through share repurchase.”