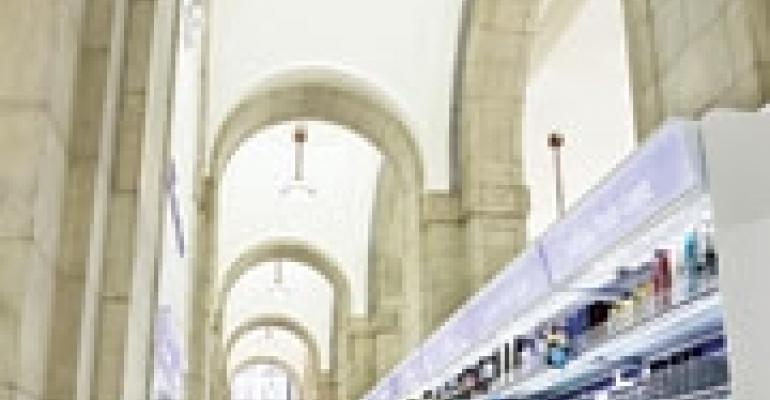 This summer a new store opened in New York City that created more buzz than retail industry insiders had witnessed in quite a while. The store does not belong to a luxury apparel brand on swanky Madison Avenue, however. It’s a 22,000-square-foot drugstore in Manhattan’s Financial District.

The store, operated by regional chain Duane Reade, which is owned by Walgreen Co., blows apart the very idea of what a drugstore is supposed to be. Located on 40 Wall Street, in a former Chase Manhattan Bank building, it features on-site hair and nail salons, an in-store health clinic, an expansive grocery, fresh food and a makeup section worthy of a department store.

There is a stock ticker running near the entrance to the store, to update Wall Street professionals on the direction of the market. There is a holographic Virtual Assistant that greets customers at the door, provides recommendations on available products and gives information about store operating hours and services.

And just so there is no mistake about the message Duane Reade is trying to send with its new store, the word “Upmarket” is displayed in big bold letters above its front doors, and repeated throughout the aisles.

To be sure, this Duane Reade is located in a part of town populated by high-flying hedge fund managers and Wall Street brokers used to six-, seven- or eight-figure bonuses, so it’s catering to very affluent consumers. And with its uber-extensive list of services, this particular store is more likely to be a marketing play designed to get Duane Reade’s name into media outlets than a prototype of a sustainable merchandising strategy portfolio-wide, according to Mike Tesler, head of Retail Concepts Management, a Norwell, Mass.-based retail consulting firm.

At the same time, it does serve the same purpose as other drugstore chains’ efforts to expand their product selections: to set Duane Reade apart from the competition.

The store at 40 Wall Street happens to be on the extreme end of the spectrum, but Duane Reade has been remodeling its stores throughout the city to forge a better connection with its customers and project what its executives call a “New York attitude.” The strategy has allowed the chain to become more geared toward specific neighborhoods instead of selling the same products using the same techniques in areas as disparate as the Upper East Side and Coney Island, according to Brendan Langan, director of retail insights with Kantar Retail, a Columbus, Ohio-based retail consulting firm.

Duane Reade’s parent Walgreen Co. has also been remodeling its namesake stores throughout the country, and recently announced plans to upgrade its location at the iconic Empire State Building in New York, taking over 10,000 square feet on the second floor. Walgreens previously operated on the ground and concourse levels, but with the new move visitors to Empire State’s Observatory deck will be able to enter the drugstore right after they finish their tours.

CVS Caremark and Rite Aid Corp. have not stayed far behind, each launching new store formats and introducing new initiatives to target multiple consumer segments. In fact, all three national drugstore operators expanded their product selections and store fleets over the past few years. They realize that with thousands of locations already operating they have little room for new store growth, but continue to face stiff competition from discounters and dollar stores.

Continue reading this feature at RetailTraffic.com.