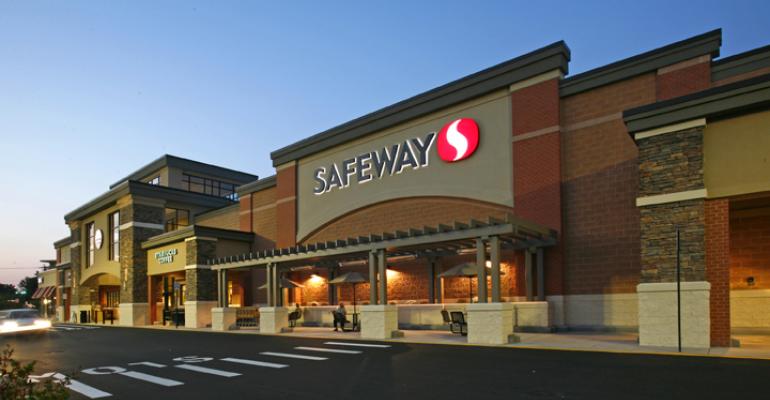 Grocery-anchored shopping centers remain a sweet spot for investors shopping for retail properties in an extremely volatile environment, and one in which overall retail transaction volume is down significantly.

Investors prefer assets anchored by grocers because they see them as less vulnerable to competition from e-commerce and a big traffic driver that benefits other tenants in their centers.

“Grocery centers are often the ones that investors are really targeting, because they’re both experiential and necessity-based,” says Arielle Weston, manager of investor research leading the retail and office platforms for real estate services firm JLL. “They feel these centers are among the safest choices they can make in retail. They recognize there’s some threat to grocery, but it’s a little bit more of a mid- to long-term threat.”

In addition, grocery shopping can been seen as experiential, Weston adds. In a recent Gallup survey of 1,033 U.S. adults, 84 percent said they never order groceries online.

“There are demographics that are becoming more comfortable with shopping for groceries online, but the general population wants to go in-store and enjoy this experience of picking out their products and price comparing and doing those things in a physical setting,” Weston notes.

For these reasons, Weston says, “Grocery is something that investors continue to have a very strong appetite for, so when a deal comes on the market in a great location , or even a good location, investors are more likely to make that type of deal work, because they have more confidence in the space than other spaces.”

“I think it’s still very much the darling of the investment space within retail and the main reason for that is grocery has been so poorly penetrated by e-commerce,” says Melina Cordero, managing director of CBRE’s retail capital markets business for the Americas.

Today, less than 3 percent of the $674.2 billion of the annual U.S. grocery sales are conducted online. “To put it in context, that’s a lot lower than apparel  where 20 to 25 percent of sales are online,” Cordero notes.

Grocers haven’t been hit by traffic losses, and more importantly, haven’t taken profit margin hits that the soft goods players have had as they adjust to e-commerce, she says.

How are investment sales?

Overall, there has been a drop-off in retail investment sales recently, Cordero points out. In the past, investors tended to allocate a certain amount of money to retail acquisitions every year, and now it’s more of an opportunistic play, she says.

However, investment in grocery-anchored shopping sector specifically has been relatively stable, with sales up over last year. What’s holding back additional activity is a lack of core centers for sale and some challenges in getting deals done.

In the third quarter of 2019, deal volume in the sector totaled $2.58 billion, up from $2.36 billion in the second quarter and $2.2 billion in the first quarter. Total volume of grocery-anchored retail property transactions came to $9.9 billion in 2018, according to RCA.

JLL reported that grocery-anchored investment volume year-to-date totals $9.7 billion, an increase of 3 percent over that same period in 2018. In addition, JLL, which tracks all U.S. grocery store openings, reported new openings were up 30 percent in 2018, with more than 17 million sq. ft. of space added to the market.

“I think the story is pretty steady right now,” Weston notes. “We’re seeing investors, who maybe took a break from retail, start to dip their toes into the pool again, and grocery is definitely on top of that list.”

The fact that sales in the sector have remained relatively stable is proof of continued demand, she says.

“Sellers are confident in the market and buyers are willing to pay. That’s a good spot to be,” Weston adds.

One of the largest deals of the third quarter closed in August when Agree Realty Corp. acquired the Mariano’s-anchored neighborhood center in Chicago for $27 million, or $360 per sq. ft., according to CoStar.

For core assets, institutional investors and publicly-traded REITs are the main buyers pursuing grocery-anchored centers. For the less-than-trophy assets, private players with a little more flexibility with their capital are active, Weston notes.

Meanwhile, “Pricing is interesting, because if you look two or three years ago at grocery-anchored centers—whether you were in a primary, secondary or tertiary market—they traded in a pretty narrow band of cap rates, say within 100 basis points,” Cordero says.

Today, “We’re seeing more disparity between the pricing on best-in-class, primary market, number one or number two grocery-anchored centers vs. secondary or tertiary markets with a smaller regional player and a little bit less certainty. So, we’re seeing a widening of that cap rate range.”

“As e-commerce grows, the need for grocers to have scale and margin and capital to be able to invest and do e-commerce right is increasingly favoring the bigger, more established, well-financed players,” she says. “Your Publix, Kroger’s, etc. Those kinds of players are well-positioned if they do it right.”

The market also favors some of the specialty players that have an offering that’s enough to drive people into the store and can still rely primarily on bricks-and-mortar.

Amazon’s investment in Whole Foods is proof that physical grocery stores are probably not going anywhere. Now Amazon is branching out into traditional bricks-and-mortar grocery with plans to open a grocery store in Woodland Hills, Calif., that isn’t Whole Foods or Amazon Go.

To compete the Walmarts and Krogers of the world are making significant technological investments to position themselves for the future, as are regional and even smaller grocers.

“A lot of the physical grocers are expanding their online platforms to compete and help create an omin-channel grocery shopping experience,” Weston notes.

REITs continue to be big players in the space

Meanwhile, Bruce Schanzer, president and CEO of Cedar Realty Trust, which specializes in grocery-anchored shopping centers on the East Coast, notes: “We’ve seen pricing hold up pretty well. There’s certainly a little bit of nervousness by the marginal players, but you’re still seeing the regular investor in the grocery-anchored product be pretty active.”

Schanzer remains bullish on the sector.

“These centers are addressing the needs of local neighborhoods and people need to eat and will continue to go to the supermarket,” he notes. “We’re seeing high customer traffic, full parking lots, and strong tenant performance at our centers, and what we’re observing doesn’t really jive with what the headlines read that bricks-and-mortar retail is about to be extinct.”

Technology, he notes, has added a new dimension to the playing field. “But the same basic survival-of-the-fittest dynamic that existed before Jeff Bezos was born continues to characterize this market,” Schanzer says.