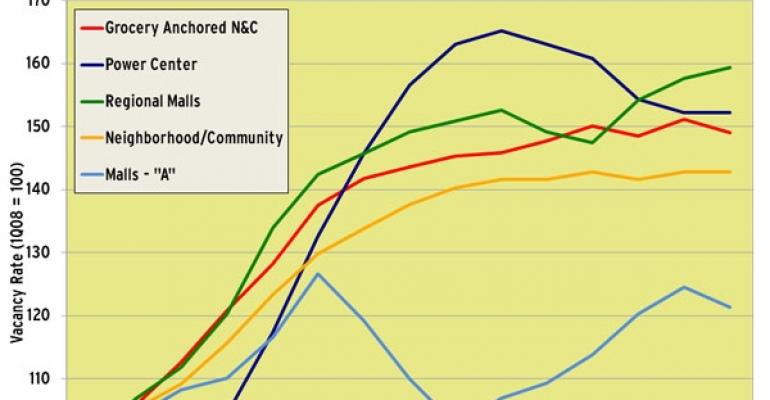 The Have and Have-Not World of Retail

While other property types, like multifamily and office, have shown consistent signs of recovery, retail has yet to do so.

Why is retail recovery lagging, and are there specific retail subsectors that are bucking the trend and posting gains?

It doesn’t matter which property types are examined: National numbers imply vacancies moored at levels unseen in at least a decade. Neighborhood and community center vacancy rates have been stuck at 11 percent for the last two quarters, just 10 basis points shy of the 11.1 percent all-time high record last observed in 1990.

Regional mall vacancies notched another slight increase in the third quarter, rising to 9.4 percent, the highest level on record since Reis began tracking this property type in 2000. Power centers are doing relatively better, with vacancies at 7 percent as of the third quarter. This is a welcome decline from its cyclical high of 7.6 percent back in the second quarter of 2010. Still, power center vacancies have to decline by more than 200 basis points before it approaches the mid-4 levels at which rates hovered in early 2008, before the downturn gained steam.

Across property types, rent growth have remained close to zero or mildly negative, knocking rents back to levels last observed three to four years ago.

In contrast, multifamily vacancies have plummeted by 240 basis points since hitting a record high of 8 percent at the end of 2009. Office vacancies have climbed down at a much more modest pace, from a high of 17.6 percent to 17.4 percent in the third quarter, but absorption has been positive for four straight quarters, implying some positive activity in leasing.

The reason why retail properties remain mired in their current debacle is two-fold. First, aggregate demand has remained weak, with economic growth and job creation relatively moribund. While retail sales have posted some heartening trends over the last few months, this has yet to translate to appreciably greater demand for retail space from tenants.

On the supply side, retail properties are dealing with a glut that isn’t weighing down office or multifamily properties. Inventory growth marched along at a relatively steady average of 1.6 percent per year from 2000 to 2008, spurred along by the housing boom, which required the construction of retail outlets that complemented new subdivisions rising around the country.

In contrast, multifamily construction slowed from 2004 to 2008 because builders were busy putting up single-family homes; office inventory growth was also cut in half relative to its long-term average. Supply for both sectors increased by only 0.4 to 0.5 percent in the five years prior to the recession, less than a third of retail’s growth rate.

Not all retail properties are suffering badly. Grocery-anchored neighborhood and community shopping centers are doing relatively better, with vacancies at 7.6 percent versus the overall average of 11 percent in the third quarter. Class-A malls, defined as regional malls that can command rents in the upper 75th percentile or higher of their specific metro, have vacancies of 6.6 percent, implying a slight decline from this sector’s cyclical peak of 6.9 percent from mid-2009. REIT-controlled malls have also been posting improvements in occupancy in the third quarter.

“What this means in practice is that because the economic pie isn’t growing quickly enough, performance improvements in one property type is coming at the cost of other buildings – usually in the area—losing tenants,” says Ryan Severino, senior economist at Reis. “The retail landscape is pockmarked with places where newer malls sporting sub-2 percent vacancies are coexisting with older malls with vacancies at 30 percent or higher.”

Until economic growth ramps up and demand for retail space accelerates, retail will be best characterized as a world of have and have-not’s. Given that the path to economic recovery in the U.S. is slated to remain relatively bumpy in the near-term, retail investors will need to be acutely aware of which properties are best positioned to weather this environment of slow growth.