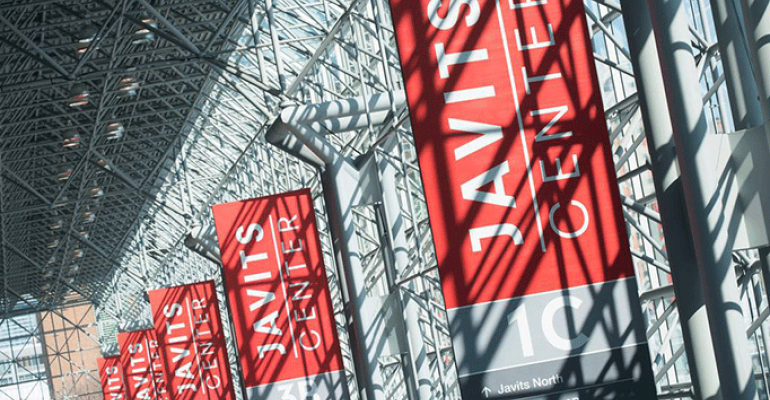 The International Council of Shopping Centers’ decision to relocate the site of its annual New York National Deal Making Conference from the Hilton and Sheraton hotels in Midtown to the Jacob K. Javits Convention Center proved to be a hit with most of those attending. At 1.6 million sq. ft. and with ceiling heights reaching up to 21’9”, the convention center has made the conference (held Dec. 8-9) feel much closer in spirit to the RECon show in Las Vegas, with elaborate booth setups, product displays, an easily navigated layout and even a sports car showcase.

Though New Yorkers often complain that the Javits Center can be a pain to reach with the closest subway station on Eighth Avenue (the facility is located between 11th and 12th Avenues) and a dearth of shops and restaurants nearby until the Hudson Yards project begins to take shape, what ICSC members felt was relief at not having to shuffle between two hotels and multiple show floors for three days.

“I am big fan of what they’ve done,” says Douglas Jerum, partner with Ferrara Jerum International, a retail real estate consulting firm based in Rochester, N.Y. “This facility is much easier to navigate, everybody has a lot more space. People are much more on time, it’s quick to get between meetings.”

Karen Raquet, executive vice president and director of property management with JLL, says the more open, one-floor layout has allowed her to gauge the true scope of the show’s attendance for the first time in years. She notes that the conference felt busier and more vibrant as a result. (ICSC estimates that approximately 9,600 real estate professionals are attending the show, 2,000 more than last year). “I love it. This is very positive and well-organized by the ICSC.”

William Hamilton, an executive with Bowman Consulting, a civil engineering firm, spent one of the New York conferences in recent years at the Hilton and one at the Sheraton. He also prefers the Javits Center to the other venues. “This is much better,” he says. “Everybody is in one section, on one floor, not all over the place. I think it really works well.”

The mood at the show was positive in general, with attendees reporting increased demand for space from retailers, as well as more construction projects being put on the drawing board. As long as the economic recovery and the interest rates hold up, the industry is expecting a good year in 2015.

“The mood is still very good, as good or better than it was in Las Vegas,” according to Jerum, who notes that his firm is seeing steady demand from both big-box retailers and restaurant operators for the project it’s handling at Steelpoint Harbor, a 2-million-sq.-ft. mixed-use waterfront development in Fairfield County, Conn. “The outlook for the holiday season is good, we continue to see gradual improvement.”

Bowman Consulting’s Hamilton notes that his firm has seen an increased number of retrofit projects in recent months, and new development activity is starting to pick up as well. The bulk of the new activity involves retailers following residential development into urban areas.

According to Sid Goswani, who is at the show representing SS&C, a software solutions provider for the financial and asset management industries, “The show is busier” than it was in 2013, he says. “I believe the market is picking up.”

JLL’s Raquet notes that there remains plenty of capital in the market looking to invest in retail assets, and “retailers are looking for space.” On Monday, she says, the show was “very upbeat and busy.”

One of the few challenges remaining, however, has been the bid-ask gap between sellers and buyers of retail properties, Raquet says. As a result, investment sales activity in the sector has not been as strong as it could have been otherwise.

“There is a log of pent-up demand, but the bid-ask gap is significant enough that you don’t see people compromising,” she says.