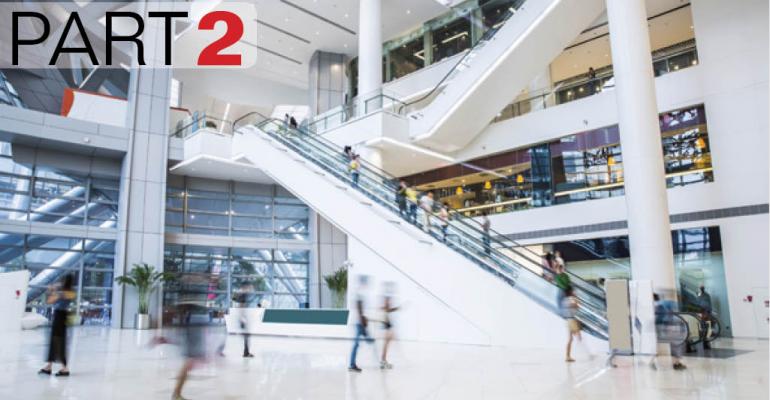 However, respondents expect more stability within their own regions. When asked about cap rate outlooks within the regions they operate, 42 percent said they expect increases, 35 percent expect no change and only 21 percent expect further declines.

“Cap rates correlate to borrowing rates, so until we see an increase in the benchmark treasuries, cap rates will continue to stay stagnant and move in correlation with borrowing rates,” says Jimmy Board, managing director of JLL. “The Fed just announced they plan to keep interest rates low until early next year so for the next eight to 12 months it’s anticipated that investment will stay pretty consistent with what we are seeing in today’s market.”

When it comes to making investment decisions, 23 percent of respondents say it is the time to buy retail and another 45 percent say they plan to hold. And 32 percent say it is time to sell.

“Those that are holding are the winners,” says Yardi’s Kern. “There are not a lot of reasons to sell right now and the future cycle favors a longer hold period. Retail will rebound as the year proceeds, but not faster than inflation until next year.”

“There are a lot of institutional investors looking to buy retail, however it is still seen as a ‘product-starved market,”’ so due to the tax burden of selling without 1031-ing into a new deal, a lot of investors are electing to hold existing assets,” adds JLL’s Board.

Respondents were asked what kinds of retail assets currently offer the potential for the highest yields. A healthy number of respondents pointed to some of the usual suspects, such as grocery-anchored strip centers, single-tenant net lease assets and value-add opportunities, while others suggested other opportunities.

One respondent wrote, “Development of strip, anchored and power centers in high-demographic growth areas. Everything else is fully priced.”

Another wrote, “Foreclosures, as they have not been managed by the banks and have upward potential for occupancy and rental rates. They do need more capital infusion after purchase for build outs, leasing etc.”

Mixed-use—an asset class that fell out of favor in the wake of the recession—also popped up as an answer by several respondents.

One wrote, “Mixed-use, urban infill are probably the most attractive. We are seeing more new construction of properties in the Atlanta area that offer mix of office, retail and multifamily.”

Overall, 57 percent of respondents say that capital is more widely available today than it was 12 months ago. Thirty one percent say capital availability is the same. Only 4 percent say there is less capital in the market.

United Realty’s Frydman points to an abundance of capital in real estate funds as one factor fueling investment.

“In order to deploy this dry powder, investors have to re-risk to earn outperformance while seeking yield,” he says. “Re-risking means adjusting the risk/reward balance in the opportunities investors deploy capital into. Investors focusing on core markets and core assets are paying very low cap rates with modest upside if we find ourselves in a different rate environment. Equity is not overly abundant, but there is ample cash seeking to be put to work in hard assets.”

“I believe lenders are trying to show the rating agencies that they are more disciplined this time around so LTVs should remain flat for now,” Frydman says. “Since regulatory changes have been implemented, banks must keep more of the below investment grade bonds backed by the loans they sell in a securitization. This, coupled with the fact that these residual pieces of the securitization transaction that they retain are now conservatively measured against their regulatory tier 1 capital, means they are thinking harder about what they put into these deals–for the time being.”

In terms of the bigger picture, 76 percent of respondents expect interest rates to increase in the next 12 months. Only 2 percent think they will decrease. Meanwhile, 21 percent expect them to remain flat.

“Even if the government decides to move forward with a rate increase I don’t see it having a major effect on cap rates for some time,” says Michael Cleeman, senior vice president of investment sales, Winick Realty Group. “There is still way too much capital trying to buy into real estate now due to a lack of alternatives for investments. With tons of cash sitting on the sidelines trying to find opportunities to be deployed and strong demand from 1031 exchange buyers that continuously feed the market, the pressure on cap rates will keep them from rising near term. Eventually investors will look for better returns as rates increase, but there will still be a disconnect between buyers and sellers which will push off any rise, I believe, until at least 2016.”

Next Part 3 of 3: Overall Outlook