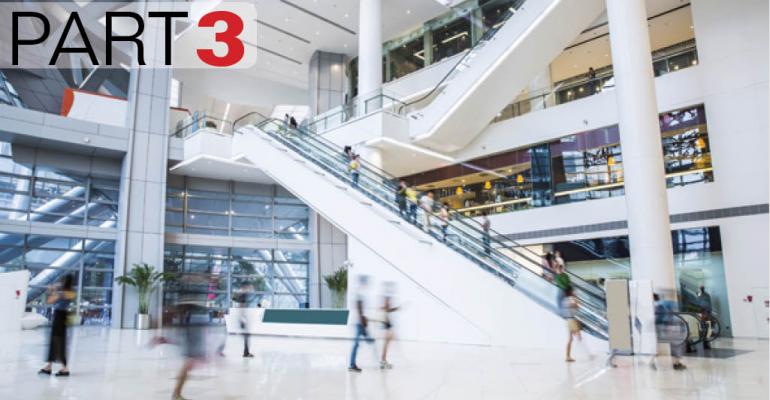 Experts we surveyed agreed with those assessments.

“Retail properties’ performances trail the health of wage growth and consumer sentiment,” United Realty’s Frydman says. “If consumers are feeling better about their household income, then they will be more open to making larger purchases. So it is clear to me that the areas in the U.S. that are experiencing the most growth and sustained economic growth are in the exact order that were highlighted by the results.”

“The strength in the migration of the population to these regions and the average relative age of the population is consistent with what we expected to see,” Kern says. “There is a tremendous migration to all of these areas because of employment options, with the exception of the Midwest which is still struggling. Many of the affected areas have generally younger populations that are more frequent visitors to retail centers.”

Asked about the biggest concerns for the retail sector in the next 12 to 24 months, the participants’ responses varied. Some common concerns included rising interest rates, the potential for overbuilding in the sector and broader economic concerns, such as worries about the sustainability of GDP growth, stagnant wages and a strong dollar.

United Realty’s Frydman points to another issue: under-employment. “Although the official … unemployment rate has steadily declined to 5.9 percent, the under-employment rate, measured by the U-6 metric, has remained stubbornly high at 11.6 percent nationally,” he says. “This measure indicates that while Americans are generally employed at levels similar to those seen in recent history, their jobs are not compensating them on average as much as they did in the past.”

Many respondents pointed to the continued rise of online sales as a threat.

One representative response, “Shopping online can potentially erode brick-and-mortar in ways that we have not yet contemplated.” Another respondent pointed out that this could make owning retail centers riskier by making them rely too heavily on entertainment.

“The continued move by consumers to online is forcing shopping centers to move more towards entertainment, which are traditionally more risky business lines in terms of rollover risk,” the respondent wrote.

Another concern was that unsophisticated investors are now buying retail assets, which is driving up prices and leaving them in the hands of unseasoned property managers. “So many inexperienced players are entering the market that it’s driving up pricing beyond fundamentals,” one respondent wrote.

One respondent also suggested that investment decisions are now being driven by financing and losing touch with the underlying asset. Some investors are “chasing assets too aggressively and relying solely upon financial engineering on the debt side to account for overall asset yield,” the respondent wrote. The industry needs “to stay disciplined and look at predicable future cash flow growth.”

About 68 percent of respondents said we are in the recovery/expansion phase of the retail real estate cycle. Meanwhile, 13 percent say the market has peaked, 6 percent say we are in a recession phase and 4 percent estimate we’re at the bottom.

“We remain optimistic about the retail real estate market over the next few years. Occupancy levels in A-quality retail assets are high, which is prompting real rental increases,” TIAA-CREF’s Ragland says. “Leases are now expiring which were negotiated in the 2010/2011 timeframe, which is further stimulating positive rent spreads on new leases. Retailers also appear to be successfully executing omni-channel strategies which will result in a continuing strong demand for retail stores at A centers in major metropolitan markets with strong income demographics. As a result, we concur that we are still in the recovery/expansion phase.”

The research on the retail real estate sector was completed via online surveys distributed to readers of National Real Estate Investor in April. The survey yielded 296 responses, of which 264 were involved in the retail sector. Recipients were asked what regions they operated in (and were allowed to select multiple regions). Overall, 46 percent said they operated in the South, followed by the East (43 percent), West (38 percent) and Midwest (35 percent).