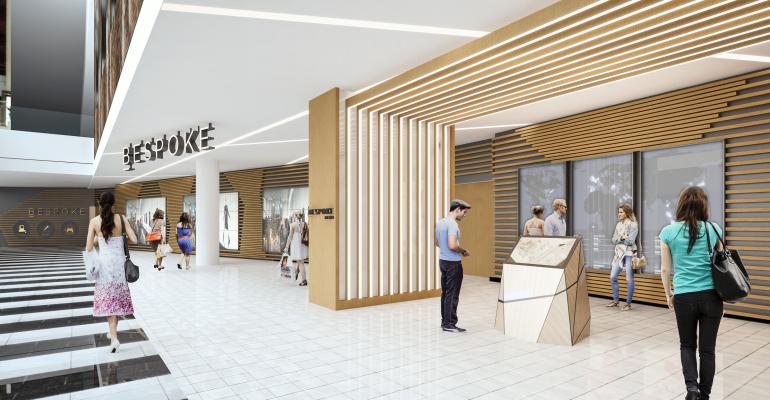 While the idea of a pop-up store is nothing new—seasonal shops and special limited displays have been popping up for years—it seems that these days more retail landlords are getting in on the craze.

Big mall owners like Westfield Corp. and Simon Property Group are allocating more space and staff to short-term retailers as a way of compensating for struggling department stores, the Wall Street Journal reported in August.

Here are some examples of recent successful pop-ups from across the country:

Last year the Westfield San Francisco Centre at 865 Market St. launched Westfield Bespoke, a 37,000-sq.-ft. space taking up the entire fourth floor of the 1.5 million-sq.-ft. mall that is being used for pop-up shops, as well as coworking and event space.

Bespoke, which opened about a year ago, could become one model allowing malls to make the most of their space as department stores lose their luster and consumers increasingly shop online.

Last month, Deutsche Bank issued a $558 million loan for Westfield San Francisco, $84 million of which was securitized as the largest loan in the CMBS deal DBJPM 2016-C3 Mortgage Trust.

The online retailer, which was founded in 2002 as a way to sell vintage and used clothing, recorded $150 million in sales in 2014. After the success of its pop-up shops in San Francisco and Los Angeles last year, ModCloth took its brand of unique and vintage-inspired dresses on the road this summer, with stops in Austin, Texas, Denver, Portland, Ore., Pittsburgh and Washington, D.C.

ModCloth’s D.C. debut was at 1626 Wisconsin Ave. NW in Georgetown for most of June, taking a spot that had previously been occupied by the boutique Urban Chic. The property was purchased in January for $2.5 million.

For ModCloth, the pop-up shops were a way of testing the waters for an eventual expansion into permanent brick-and-mortar locations, CEO Matt Kaness told Bloomberg.

The switch from e-commerce isn’t only for small companies, though. Amazon’s 2014 announcement that it was setting up pop-up kiosks in San Francisco and Sacramento ahead of Christmas, allowing customers to try out devices such as phones, tablets and e-readers, signaled a shift in strategy for the online retail behemoth.

E-commerce has grown significantly over the past decade, and Amazon has been a large part of that growth—but e-commerce accounted for just 7.5 percent of total U.S. retail sales in the second quarter of this year, according to the U.S. Department of Commerce.

Perhaps that's one reason Amazon has added more than two dozen pop-up locations in shopping centers across America, and is expected to add still more. There are also three Amazon Books locations on the West Coast, with a plan to open a New York City store in Hudson Yards in the next few years.

Clothing and shoe retailer KITH teamed up with Nike in August to open the Nike x KITH pop-up at KITH’s existing Manhattan location at 644 Broadway, a commercial condominium built in 1900. The shop features Nike and KITH merchandise, as well as cereal bar and cafe KITH Treats.

But perhaps the hottest retail event of the summer was Kanye West’s Life of Pablo pop-up shops, named after his latest album.

The 21 stores opened worldwide quickly sold out of all available merchandise, with customers reportedly lining up for hours for the chance to spend hundreds of dollars on hats, shoes and jackets. West had previously opened a pop-up shop in March at 83 Wooster St. in SoHo, which he said racked up $1 million in clothing sales over the two days it was open.

In September, Rihanna teamed up with Puma to create her own apparel collection, which is being sold at locations across the country, including at a pop-up shop at 112 W. 34th St. in Manhattan.

In Manhattan overall, leasing activity for pop-up stores is on the rise, ABS Partners Real Estate said in its third quarter report on the Manhattan retail market.

A hotel gets creative

doubles as the artist in residence, and on being one of the longest running family-owned hotels in midtown Manhattan.

The hotel also has an unusual strategy for making the most of its existing space, getting in on the pop-up craze with The Market at Roger Smith, which consists of three different pop-up retail and branding spaces of varying size. Over the summer it played host to boutique jewelry company Ambica New York. The hotel also reportedly opened a “pop-up speakeasy” known as The 125, an invitation-only bar located behind a storefront at 125 East 47th Street.

In 2012, Apple Bank for Savings issued a $10 million loan for the Roger Smith, which is located at 501 Lexington Ave. on the corner of Lexington and E. 47th St.

From the e-commerce sector to celebrity merchandise, from mall space to hotel space, pop-ups seem to be all the rage. It remains to be seen whether these short-lived shops will be enough to make up for the stumbling of traditional retail giants like Macy’s, Sears and Sports Authority, but for now it’s looking like they are a growing part of the overall strategy of a retail industry urgently trying to grab consumer attention.