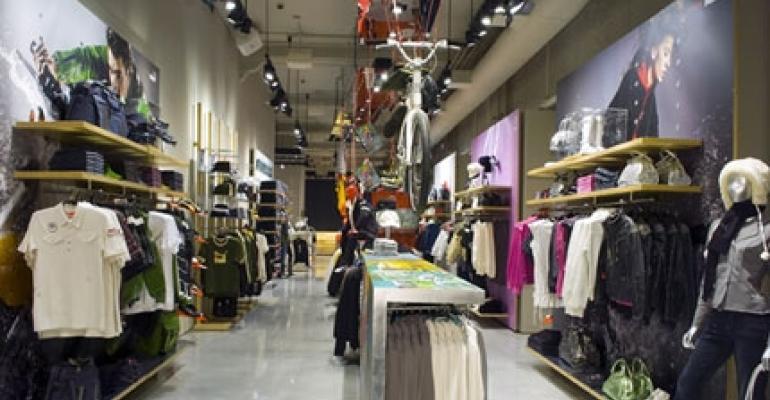 Puma, maker of sneakers, sportswear and fashion, has unveiled a redesign for its stores with a new 5,300-square-foot flagship store in New York City’s Union Square that was previewed for the media Wednesday morning.

The store, along with one in Portland that also features the new design, will open Thursday. Puma has a handful more openings planned in the U.S. before the end of the year. Globally, the $3 billion company plans to triple its store count to 240 from 80 by 2010, according to Michael Specht, Puma International’s global head of retail. Sales in the first half of 2006 were $1.76 billion; up 16 percent over the same period a year ago.

Puma is looking at the top 50 MSAs in the U.S. for new stores and is looking primarily at urban sites and lifestyle centers. “It’s not just demographics, but also pyschographics that we’re looking at,” says Tom Ulrich, Puma North America Inc.’s senior vice president of retail. Ulrich is heading the company’s U.S. expansion, working with retail consultant the Greenberg Group. For example, in trying to woo both male and female customers, Ulrich prefers lifestyle centers that have movie theaters as tenants. Such properties are more appealing to male shoppers unlike fashion-oriented lifestyle centers with tenant mixes geared towards female shoppers.

Ulrich says Puma wants to be in locations within close proximity to cutting-edge retailers such as Apple and Pac Sun. Puma also sees its revamped retail stores as a way to also improve its wholesale business.

Specht says, the new design will be adopted in all stores.

Puma’s new concept has a modular format, designed to make its selling space flexible and easy to turn over as it changes its merchandise. It also means the company does not have strict size requirements, but is generally looking for locations in the 5,000-square-foot range.

The merchandising mix includes footwear, apparel and accessories. All the graphics and imaging are magnetic so that the store’s shelves and wall space can be constantly tweaked as new merchandise rolls in.

“We wanted to capture the energy of the city,” says designer Paolo Lucchetta, a partner in SRL.

The retooled store also includes Puma’s “Mongolian Bar”—where customers can design their own sneakers and open spaces at the backs of stores that serve as public gathering spaces, where no merchandise is displayed.

The 58-year-old company has been operating its own stores since 1999 and now operates over 40 concept stores in the U.S.

“Charlotte, for example, was probably not ready for a store because our brand reputation was not developed yet, but we saw that having a store could help the wholesale develop as well,” Ulrich says.

The pace of store additions in the U.S. will probably be slower in the U.S. than abroad, Ulrich says, but he would not discuss numbers.

Ulrich says Puma is putting a higher priority on location rather than growth for growth’s sake in its store strategy. “I waited for this site for four years,” Ulrich said at the Union Square event. “We wanted to be on the same block as Diesel and in this store spot.”