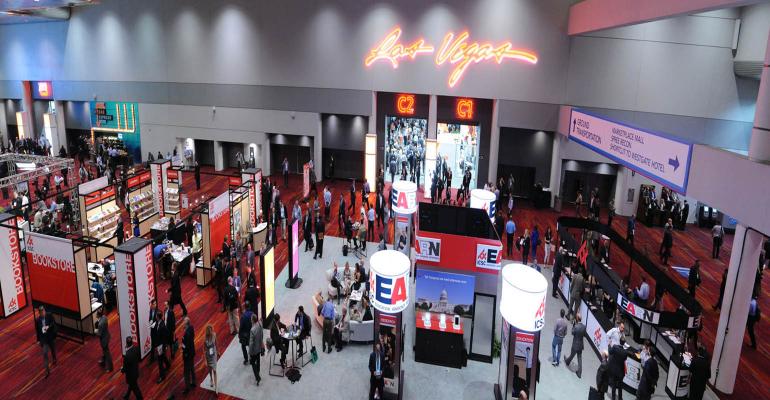 Last year the event drew in 37,000 industry insiders, and ICSC expects a similar number of attendees in 2018.

Last year the event drew in 37,000 industry insiders, and ICSC expects a similar number of attendees this year, wrote an ICSC spokesperson in an email. There will be 1,100 exhibitors at the conference, which runs from May 20 to 23, and the conference will showcase around two dozen technology companies at the ICSC’s Innovation Exchange.

At real estate services firm JLL, the sense is that this year’s conference will be busier for its team of about 175 professionals than it has been in a while, says Greg Maloney, CEO of the firm’s retail Americas division. Consumer optimism is at historically high levels since the recession, which bodes well for retail real estate, he notes. “We see right now retail really starting to soar,” Maloney says.

Hal Shapiro, senior director at Winick Reality Group, a retail leasing firm in New York that serves the tri-state area, says he believes some of the negative press lags behind what’s happening in the market, as his firm is seeing more activity as landlords have begun to lower asking rents and offer concessions—particularly in New York. Heading into the conference, Shapiro says his sentiment is one of “cautious optimism.” “I think the dollars are out there to be spent in the retail world, but the retailers lack the confidence,” he notes.

Real estate services firm CBRE intends to bring about 800 to 900 team members to the conference, about the same amount as in 2017, says Anthony Buono, global president of retail at the firm. Buono notes that the retail real estate industry may be experiencing some disruption, but the sentiment for the business is “very strong.” “I don’t have any fear or hesitation or doubt right now,” Buono says. “I think there’s a lot of positive signs for what we do.”

CBRE’s first quarter retail report noted that retail sales grew in the first few months of the year, and net absorption and asking rents also increased. Data from real estate research firm Reis also found that vacancy did not spike for the sector in the first quarter.

There are pockets of struggle—the bankruptcy of big-box retailer Toys ‘R’ Us and the closures of department stores are two examples—but there are areas of strength as well, Buono notes. Food and beverage and online retailers, for example, are growing categories in brick-and-mortar.

When it comes to big-box closures, Maloney says it is too early to say how these closures will impact the industry. There is still optimism that the space can be filled or redeveloped, he notes. “Once we know when we get the space back—that’s when the fun begins,” Maloney says.

Still, Maloney expects that questions will surface about how to determine what are the right store footprints for retailers, and when is the best time to right-size retailers’ portfolios. “It’s hard to juggle when you do it and how you do it,” he says.

Retailers are also looking at omni-channel distribution of their products and brands, and at real estate as a choice—these are certain to be top questions at the show, Buono says. “All of those things today are really being reimagined in our industry,” he notes.