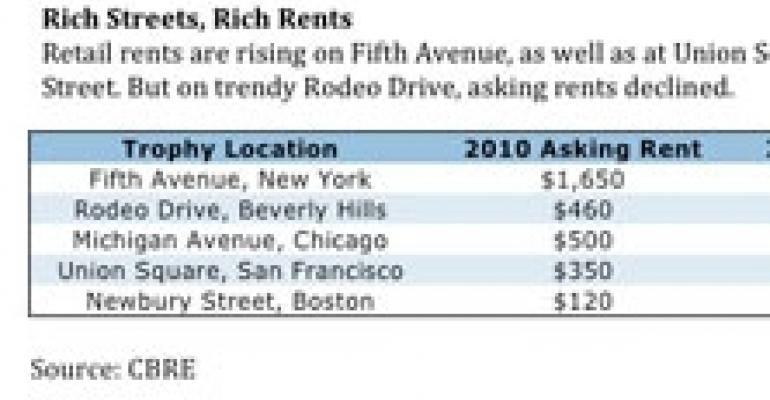 Rents Rise in Trophy Retail Districts, But Will Tenants Pay?

Rents are rising in many of the nation’s best-known trophy retail districts. Of the 13 markets tracked in the U.S. and elsewhere in the Americas in a report by brokerage CB Richard Ellis (CBRE), seven posted rent increases in the past 12 months. But as rents climb in these exclusive districts, and more national retailers move in, some tenants are balking at paying the higher prices.

New York’s Fifth Avenue leads the way with the world’s highest retail asking rents at $1,650 per sq. ft. for ground-floor space, representing a 6.2% jump over 2009. Meanwhile, asking rents along Boston’s chic Newbury Street in the Back Bay area rose 9.1% in the 12-month period ending in the second quarter 2010. On M Street in Georgetown in the District of Columbia, asking rents climbed 8.8% over the same period.

Those lofty figures compare with a national average asking rent of $19.07 per sq. ft. for community and neighborhood centers combined in the second quarter, according to New York-based research firm Reis. The national rate represents a 1.0% drop from the same period a year earlier.

“Recovery isn’t complete, but the findings show an increase in demand and activity in the top retail locations in the Americas,” says Anthony Buono, executive managing director of CBRE’s Retail Services. “It depends on the market and the city.”

Although the super-luxury markets are trending up in their rent demands, current and prospective tenants may not be willing to shell out higher monthly payments. “Many landlords and real estate companies have taken an overly optimistic view of the economic recovery and started to request higher rents,” says Tami DeFrank, vice president and director of real estate with Jones Lang LaSalle’s San Francisco office. “We don’t believe that the tenants are willing to pay increased rents at this time.”

Even as rents increase on Fifth Avenue and in other prominent retail districts, a variety of national and international retailers are signing leases. For example, Uniqlo, a Japanese casual wear designer has taken 90,000 sq. ft. on three levels at 666 Fifth Avenue for $18.5 million.

“The consumer is more open to promotional oriented retailers like Uniqlo today,” says Buono. “Consumers have bifurcated the two segments – luxury and aspirational luxury – and they’re okay with both. That’s why you see the boxes doing better [than in the past] on high streets.”

Fifth Avenue is about to add yet another retailer to its roster. The 20-story Takashimaya building at 693 Fifth Avenue was sold in the second quarter for more than $140 million, and New York-based developer Thor Equities bought the property and plans to expand the ground-floor retail space from 3,500 sq. ft. to more than 6,000 sq. ft.

In California, Los Angeles-based clothing retailer Forever 21 plans to open a second store in Union Square, at Two Stockton Street. The new store will cover 53,000 sq. ft., according to CBRE.

Desigual, a Spanish clothing company, has also taken 8,000 sq. ft. on two levels at Powell and Ellis streets in San Francsico for $125 per ft., reports CBRE.

Even with the addition of new storefronts to Union Square, the urban retail district recorded a slight increase in vacancy in the first quarter, according to Encino, Calif.-based real estate services firm Marcus & Millichap. Across the San Francisco area, vacancy rates ticked up, although the average remained a relatively tight 4.3%, one of the lowest in the nation.

But to keep the vacancy rates low, retail property owners are expected to push concessions to more than 10% by year’s end, much higher than in the years following the dot-com bust, according to Marcus & Millichap.

Despite the short-term volatility, San Francisco’s market remains stable overall. The vacancy rate has not fallen below 3.7% or risen above 4.3% in any quarter since 2005.