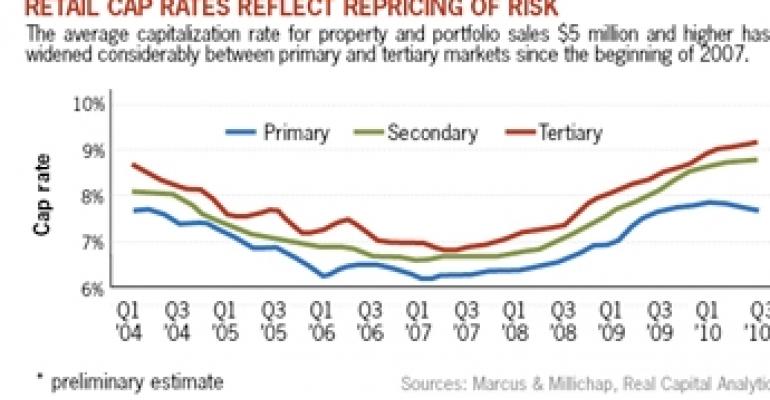 Analysts are throwing out the baby with the bathwater, says veteran researcher.

The late, great comedian Rodney Dangerfield used to famously complain, “I get no respect.” The U.S. retail real estate industry must be feeling the same way these days. Of the five major commercial real estate property types, retail received the lowest investment rating in Emerging Trends in Real Estate 2011, an annual forecast published jointly by the Urban Land Institute and PricewaterhouseCoopers.

On a scale of 1 to 9, with 1 representing abysmal investment prospects and 9 representing excellent prospects, retail rated 4.5. Even the battered office market received a higher rating at 4.72. Apartments led the pack with a rating of 6.19.

But is the harsh investment outlook for retail completely justified? “I think retail is being oversimplified, without a doubt, and most analysts are throwing out the baby with the bathwater,” says Hessam Nadji, managing director of research for Marcus & Millichap Real Estate Investment Services based in Encino, Calif.

The success of a retail center today has much less to do with the category concept such as lifestyle, grocery-anchored or mall, and much more to do with proximity to population density and job growth, Nadji believes. “The further you go out from infill locations, the more you see the influence of extreme housing construction levels that were way over the top. That's where the higher pain levels are today.” In other words, there is a pronounced bifurcation in the marketplace.

The average vacancy rate at neighborhood and community shopping centers remained flat at 10.9% in the third quarter compared with the prior quarter, according to New York-based Reis. The average effective rent also remained unchanged at $16.53 per sq. ft.

Among the 80 primary retail markets that Reis tracks, San Francisco posted the lowest vacancy rate in the third quarter at 3.6%, while Dayton, Ohio recorded the highest vacancy rate at 17%.

U.S. retail vacancies are expected to inch upward in 2011. “Even if there is a resumption in consumer confidence and a rise in retail spending, retail properties typically lag recoveries by 12 to 18 months,” says Reis economist Ryan Severino, who adds that the results for the next five to six quarters will be choppy.

Regional malls are faring somewhat better. The average vacancy rate at regional malls in the third quarter was 8.8%, down from 9% in the second quarter. There are currently no regional malls under construction in the United States, the first time that's occurred since the early 1950s. That boosts fundamentals.

After declining for seven straight quarters, the average effective rent among non-anchor tenants at regional malls (excluding food courts) remained unchanged at $38.72 per sq. ft. in the third quarter.

Westwood strongly prefers older shopping centers (at least 7 years old) versus newer centers because the rents tend to be lower and can be more easily replicated in the event of tenant turnover.

“We are hyper rent sensitive,” says Joe Dykstra, executive vice president of Los Angeles-based Westwood. “We believe the lower the rents, the better. The first thing I always look at is the age of the property and the rent.” Westwood prefers infill sites versus suburban locations to guard against competitive threats.

In early November, Westwood bought a 100,000 sq. ft. center in Omaha anchored by a Hy-Vee supermarket for approximately $9 million. The 20-year-old Applewood Centre was 98% leased at the time of the sale and included about 29,000 sq. ft. of shop space. The surrounding area features high-density housing. The capitalization rate on the deal was 8.75%. For a similar property in a larger city the cap rate would have been 150 basis points lower, says Dykstra.

The competition is getting fierce for solidly performing grocery-anchored centers. For a desirable property that comes to market, the seller has five to 15 prospective buyers from which to choose, says Dykstra. “A property we tried to buy earlier this year had 49 bidders.”