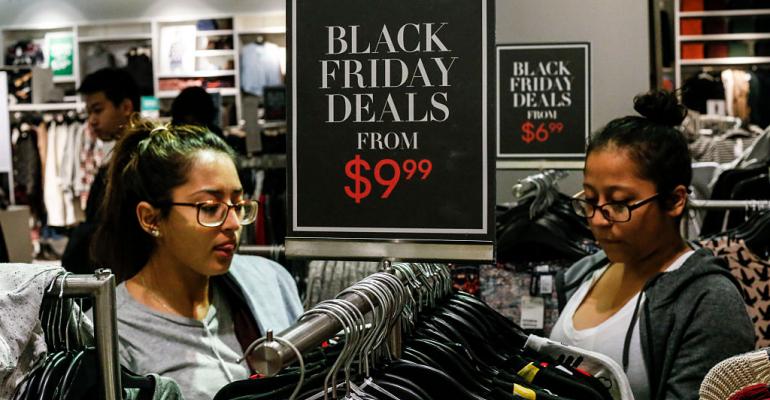 As the holiday season gets closer, retailers and mall operators are initiating more flexible shopping strategies to compete with e-commerce giants and get customers inside stores. Industry insiders predict a better performance this Black Friday than last year, but caution that doesn’t mean Black Friday 2016 will be one for the record books.

“I anticipate in regards to Black Friday that we will do better than last year, but it won't be blockbuster,” says Neil Stern, senior partner at Chicago-based consulting firm McMillanDoolittle LLP.

Stern agrees with a forecast from consulting firm Deloitte that total holiday sales will rise 3.6 to 4.0 percent year-over-year, but he is concerned that election results could damper consumers’ holiday spending. “It is hard to get away from the news; results don't matter in the sense that there will still be pessimism one way or another following the election,” he says. “That could weigh down retail a spending a bit for the holidays.”

ICSC is forecasting 3.3 percent year-over-year growth in total sales for physical stores, saying 91 percent of shoppers will visit a physical store this holiday season. Meanwhile, the National Retail Federation (NRF) has predicted 3.6 percent growth in total sales. “We think it is a good year for retailers, better than the last seven years on average,” says NRF Chief Economist Jack Kleinhenz, noting the seven-year average was 3.4 percent.

Preliminary figured releases by Thomson Reuters showed that its same-store sales index for September 2016 was expected to come in at -0.3 percent. That’s down from growth of 0.8 percent in September 2015.

Of particular interest is the “mix” of retailer and mall decisions on whether to remain open for Thanksgiving Day.

“Black Friday lost lots of luster last season—retailers stayed open from Thanksgiving. Because of online [shopping], there is no need to line up, many shoppers are doing that out of tradition,” Stern adds.

Malls are “actively looking” at different types of experiences they can offer, Cegielski says, adding that retailers are also offering deals sooner. Dreamworks’ interactive pop-up concept DreamPlace will be open at 14 malls globally, 12 of those within the United States. Targeting families, it is an example of the type of experiential initiatives mall operators are occupying floor space with in order to make spending time at malls more attractive, according to Cegielski.

Macy’s recently announced its department stores would remain open on Thanksgiving. Regional mall REIT CBL & Associates has reported its malls will be closed for the holiday. A  spokesperson for Simon Property Group, the largest regional mall REIT in the country, said that “traditionally there are a handful of malls closed for Thanksgiving, but most of them will be open.”

Calls to Macerich regarding its Thanksgiving plans were not returned, but the REIT just announced holiday events for it fashion outlets in Chicago and Niagara Falls, utilizing a mix of social media giveaways, live DJs and Santa-themed get-togethers such as “Pet Night with Santa” and “Milk and Donuts with Santa.”

In addition to themed events, explicit emphasis on connecting with shoppers through mobile devices is another way that retail stores and mall operators are trying to optimize sales at their physical locations.

Nearly 80 percent of shoppers with a mobile device will use it while shopping at stores this holiday season and 90 percent will research their intended purchases online before shopping at a store this year, ICSC reports.

Of the two primary ways that retailers are competing with online to increase store foot traffic, the first is click-and-collect, whereby goods purchased through the store’s website can be picked up in the store. Click-and-collect is an advantage to implement because retailers can capitalize on traffic by increasing the chances of add-on sales while in stores, according to Stern. “Most retailers put foundation in to make that happen, but this holiday season will test how good they will be at fulfilling orders and how much consumers will embrace it,” he says.

They are also offering in-store ordering with shipping to the home, which “can help save a sale and get products to consumers faster,” he adds.

“Balanced messaging to customers to drive traffic to both bricks and digital,” “improving in-store experience and delivery options” and “ensuring inventory is built up properly” are some of the responses retail executives provided to a survey about their marketing and fulfillment investments for this holiday season, according to NRF’s 2016 Retail Holiday Planning Playbook.

Connecting mobile shopping with physical stores is the big retail challenge, as mobile devices are used to start shopping, Kleinhenz says, adding that brick-and-mortar needs to connect with mobile. “To stay relevant, retailers need to make further investment in technology and strategy that is connected to shopping infrastructure. The million-dollar question is how to do it. Nobody has a monopoly on that,” he notes.

This holiday season, retailers are also paying close attention to inventory management, according to Kleinhenz. “Retailers have to give clients choices and have inventory; this year's big retail issue is balancing product and inventory. Retailers need to be knowledgeable because shoppers are price-savvy. Retailers also need to invest in shipping alternatives.”

Holding onto too much inventory is yet another revenue liability as retailers grapple with deflation, he says.

“Pricing in retail has been significantly impacted by deflation. Consumers today are buying goods more cheaply than they did a year or two ago. It put a real dent in retailer margins,” Kleinhenz notes. “There is very little pricing power on retail goods, and this affects store formats and locations. Even large-format, big-warehouse type enterprises are making adjustments.”