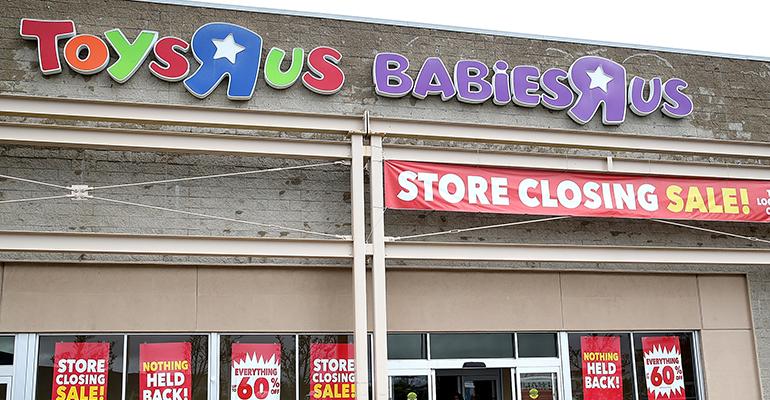 The move to liquidate did not come as a complete shock, says Greg Maloney, president and CEO of the Americas retail division with real estate services firm JLL.

Few in commercial real estate were shocked following the announcement that Toys ‘R’ Us has moved to liquidate all its U.S. stores, even as they work to fill the big spaces that will soon be left behind.

The liquidation filing means that more than 800 stores in the U.S. would shutter, taking a major big-box tenant and toy industry player off the market. Most of the Toys ‘R’ Us stores are in the 35,000-sq.-ft. range and located in power centers.

The iconic toy retailer, headquartered in Wayne, N.J., filed for bankruptcy protection in September, when some in the industry thought the brand—a leader in the toy industry—would emerge in some form. In December, Toys ‘R’ Us said it would close 180 stores, which was an encouraging sign to some landlords that the figure was not higher. CNBC reports that Toys ‘R’ Us hopes to keep some 200 stores open as well as its Canadian business, though it already announced plans to shutter its stores in the U.K. as well.

Nevertheless, the move to liquidate did not come as a complete shock, says Greg Maloney, president and CEO of the Americas retail division with real estate services firm JLL. The retailer had been struggling with nearly $5 billion in debt, stemming mostly from its 2005 leveraged buyout by private equity firms KKR and Bain Capital and REIT Vornado Realty Trust. It was also facing increasing competition from Amazon and other e-commerce players. “Most of us are prepared for it,” Maloney says.

Matthew Harding, president of Levin Management Corp., which has five Toys ‘R’ Us stores in its portfolio, says some in the industry had been figuring that bankruptcy proceedings would lead to a reorganization and there would be a right-sizing of the retailer’s portfolio. “It did come to some degree of a surprise, but not a total one,” he says.

News of retail bankruptcies and store closures have abounded as retailers race to catch up to e-commerce giants like Amazon. However, the leveraged buyout was likely the biggest culprit in the case of Toys ‘R’ Us, particularly as e-commerce transactions still comprise a relatively modest share of total retail sales and some retailers have adapted, says Michael Gorman, executive vice president and principal at Metro Commercial, a full-service commercial real estate firm. The buyout left little cash on hand for in-store and online investments, and eventually debt service payments became insurmountable.

Other retailers have faced similar struggles because of leveraged buyouts. Claire’s, a teen accessories store located in malls, recently announced it was filing for bankruptcy as it grapples with a $2 billion debt load from its 2007 leveraged buyout by Apollo Global Management LLC, Bloomberg reports. Gymboree, a children’s apparel retailer who faced nearly $1 billion in debt from a leveraged buyout by Bain Capital in 2010, successfully exited bankruptcy after liquidating 330 underperforming stores, according to Retail Dive. “It absolutely all has to do with these private equity groups saddling them with debt,” Gorman says.

Toys ‘R’ Us also failed to adapt to changing consumer demands and to the omnichannel model of retailing quicker, Maloney notes. In addition, discount retailers including Walmart and Target had provided stiff competition. “It’s a consumer business now,” Maloney says. “It used to be ‘build it and they will come,’ but now the consumers have so many different choices and you better give them what they want.”

With debt service payments, retailers have tighter margins, Harding notes. Combined with downturns in the economy, competition and adaptation pressures, there is less room for error. “I think it’s a bit of a perfect storm,” he says.

Grappling with the space

The closures present some challenges for the real estate market. First, they represent another blow for long-struggling regional malls, wrote John Mercer, senior analyst at retail think tank Coresight Research, in an email. The closures will also release a glut of property onto the retail real estate market, particularly in the short term, he added.

Some are viewing the closures as an opportunity for positive change.

Toys ‘R’ Us stores tend to have been in their locations for a long time and have rents that are a bit below market, Harding says. This means that landlords can use the closures to raise rents for a new tenant.

There already have been prospective tenants aiming to be considered first in case the stores should shutter, says Gorman, who thinks fitness centers, grocery stores and discount retailers like HomeGoods may be most likely to take up some of the space. The owners of class-A shopping centers in the best markets will likely have no issues backfilling or repurposing the stores, but it may get harder with lower-quality assets. “Quality real estate will always be desirable,” he says.

While it might be a little bittersweet to lose a long-lasting tenant—the second Toys ‘R’ Us ever opened is in a Levin shopping center in Watchung, N.J.—there is a chance to evolve with consumer demands, Harding notes. “It provides an opportunity for change that was probably coming anyway,” he says.

Altogether, there are 111 CMBS loans worth $4.9 billion that have been secured by 234 properties with exposure to Toys ‘R’ Us or Babies ‘R’ Us, according to a report from Kroll Bond Rating Agency released days before the liquidation announcement. Moody’s has identified 87 loans with exposure to the stores across 76 of Moody’s-rated CMBS deals. “While loans secured by properties with large exposure to Toys ‘R’ Us or Babies ‘R’ Us may have an increased risk of default, this development is expected to have a limited overall impact to Moody’s-rated CMBS transactions, given the overall relatively small exposure,” said Moody’s vice president, senior analyst Matthew Halperin, in a statement.