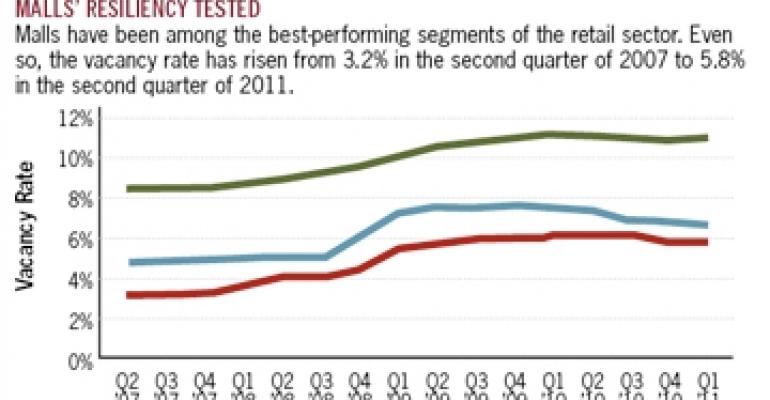 Landlord concessions are showing signs of tapering off, while property sales crank up.

In spite of a wobbly job market and falling housing prices, the retail real estate sector is recovering. The retail vacancy rate in the first quarter stood at 7.1%, according to the CoStar Group, a Washington, D.C.-based research firm, in line with the fourth quarter of 2010.

“[We] believe that rents coming back to pre-recession levels is still two to three years away,” says Naveen Jaggi, senior managing director in the Houston office of brokerage giant CB Richard Ellis. “Until then, the creditworthiness of the tenants will drive most deals.”

The good news for landlords is that the days of every tenant asking for rent concessions have passed.

“There is still a lot of uncertainty with existing tenants and still a lot of changes in vacancy happening in the marketplace,” says Branson Edwards, Chicago-based executive vice president with Grubb & Ellis.

“It seems to us that we are still some time away from there being parity between tenants and landlords,” he adds.

In addition, the new tenant will likely want a termination clause if sales don't reach desired levels within a three-year period, according to Gene Spiegelman, executive vice president in the New York office of Cushman & Wakefield.

“If I were the retailer, I'd be looking to come in, turn on the lights, and if the situation warranted, leave in two or three years.”

There are exceptions, however. Owners of Class-A malls are in a strong enough position that they no longer have to meet every demand from tenants, according to Spiegelman, because vacancy at those properties has come back to historical levels.

At the end of first quarter, vacancy at regional malls nationwide stood at 5.8%, according to CoStar, lower than most other retail property types (see chart).

Landlords at better performing properties are pushing back against requests for shorter lease terms. If a retailer gets a TI allowance, the landlord will ask for a 10-year term, with a five-year option, according to Jaggi. Previously, many retailers would insist on signing three- and five-year leases.

The investment sales market for retail properties also is heating up as buyers gain more confidence in the economy and financing has become easier to obtain.

In April, sales of retail properties valued above $2.5 million reached $1.6 billion — a year-over-year increase of 39%, according to Real Capital Analytics (RCA).

“We are seeing a substantial uptick in multi-tenant transactions, in deals north of $5 million. We are going to be awfully busy this summer and fall,” predicts Rose.

As a result of improving market conditions, average cap rates on retail acquisitions fell to 7.5% in April, according to RCA, 20 basis points below the 7.7% recorded in January.

2011 BEST OF THE BEST COMPLETE PACKAGE