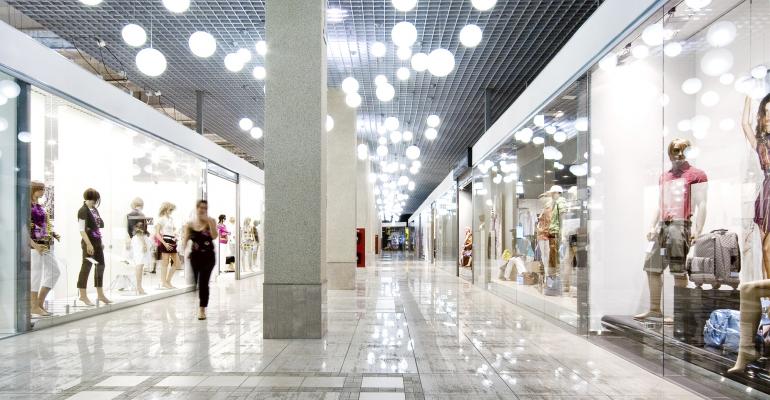 The first quarter was marked by weak economic activity, largely attributable to a confluence of temporary factors, such as port labor disputes on the West Coast, inclement weather, a rising dollar crimping exports and low energy prices resulting in depressed business investment. Against this backdrop, neither new construction nor net absorption of retail space was robust. Yet this is in line with recent performance even in quarters of strong economic growth. Clearly, the retail sector’s troubles cannot be solely blamed on the sluggish nature of the current recovery.

Neighborhood and community shopping center vacancy declined by 10 basis points during the first quarter to 10.1 percent. Over the last 12 months, the national vacancy rate declined by 30 basis points, which matches the best performance over a 12-month interval since the recovery for retail began in the latter half of 2011. The national vacancy rate has declined by 100 basis points from its historical peak during the third quarter of 2011. This is the slowest rate of vacancy compression during a recovery from a recession since Reis began tracking the market in 1980. Vacancy has not fallen by more than 10 basis points in any quarter of the current recovery and that is not likely to change during 2015. During the first quarter, neighborhood and community center completions totaled just 1.962 million sq. ft., while occupied stock increased by 3.516 million sq. ft. The appetite for new construction of neighborhood and community centers remains meager, owing partially to restrictive lending standards and partially to sheer lack of demand for the sub-sector. 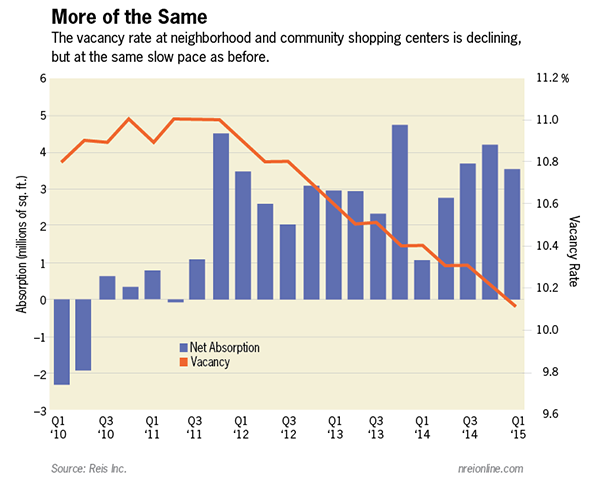 Yet while the relatively weak economic recovery is not helping the property type, there is more at work than simply that. Labor markets surpassed previous peak levels while consumer spending has also attained new heights. Normally this would signal a stronger performance from neighborhood and community centers, certainly on the demand side of the ledger. To put the current level of demand in perspective, consider that average quarterly net absorption for the nation was 7.15 million sq. ft. between 2000 and 2007. Last quarter’s net absorption was among the top five quarterly totals exhibited in the current recovery, but amounted to just around 50 percent of the pre-recession average noted above.

Improved economic performance, while not entirely robust, has not translated into significant increases in demand. This is partly due to the rise of alternative retail formats that have siphoned interest away from neighborhood and community centers. In addition to e-commerce, this proliferation of diverse retail formats has likely permanently changed the landscape for retail.

Regional mall vacancies declined 10 basis points during the quarter to 7.9 percent. This reverses the temporary (and minor) increase from last quarter, with the mall vacancy rate now unchanged over the last 12 months. Despite the seemingly innocuous headline figures, there is a bit of a tug of war going on in the mall sector. On the one hand, store closures have not yet ceased. Sears continued closing stores during the first quarter and a number of other national retailers will close stores throughout the balance of 2015. On the other hand, the economy and labor market continue to improve (despite the weak first quarter), which should support retail spending. The outlook for demand is relatively optimistic, but this tug of war will play out slowly.

Meanwhile, there is no supply pressures to contend with. There remains no new ground-up development of true regional malls. Although there are expansions and renovations of existing malls and the development of properties that are mall-like, this is a mature sub-sector with little need for truly new properties. 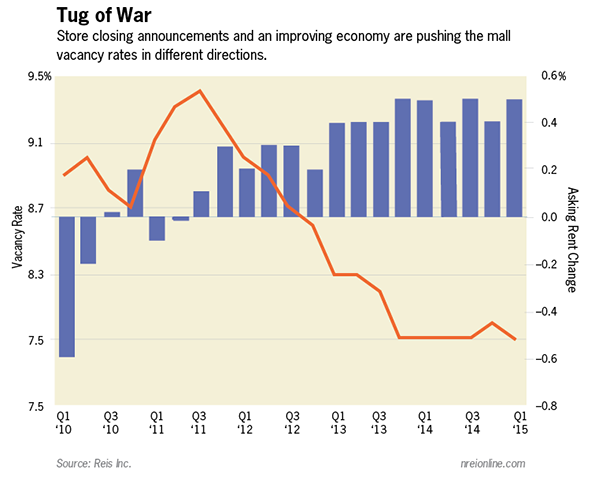 Asking rents grew by 0.5 percent in the first quarter, marking the 16th consecutive quarter of rent increases at the national level for regional malls. Rents were up 1.8 percent over the last 12 months. High-end dominant malls and inferior malls are playing different roles in the sub-sector’s recovery. Because vacancy rates at dominant malls are microscopically low, rent growth has been, and will continue to be, very robust, which will drive overall mall rents higher. However, with little to no vacancy left at such properties, they cannot help much on the occupancy front. Inferior malls still have elevated vacancy rates, therefore these malls will have to be the leaders if occupancy is to increase at a meaningful rate this year.

With vacancy rates still so high at these malls, landlords have little leverage to place upward pressure on rents in lower caliber malls.

The overall outlook for the economy and the retail real estate sector remains optimistic despite recent setbacks. The labor market is expected to generate roughly 250,000 jobs per month this year, many of which should be high-value-add positions that command higher compensation. Moreover, the number of people working part time on an involuntary basis continues to fall, as does the underemployment rate.

We have already seen the labor market and consumer spending surpass previous peaks. As they continue to reach new record highs, they will cause demand for retail space to increase. Construction of neighborhood and community centers, as well as malls, remains mired near historically low levels despite six years of economic growth. The market will need a much stronger rally before that will change.

Therefore, the environment is ripe for vacancy compression and rent growth. We still expect neighborhood and community center vacancy to fall by another 30 basis points in 2015, in line with the 10 basis point quarterly declines of recent periods. Malls should perform similarly. While rent growth is not expected to be robust, expectations are for annual rent growth in the mid-2 percent range for 2015.