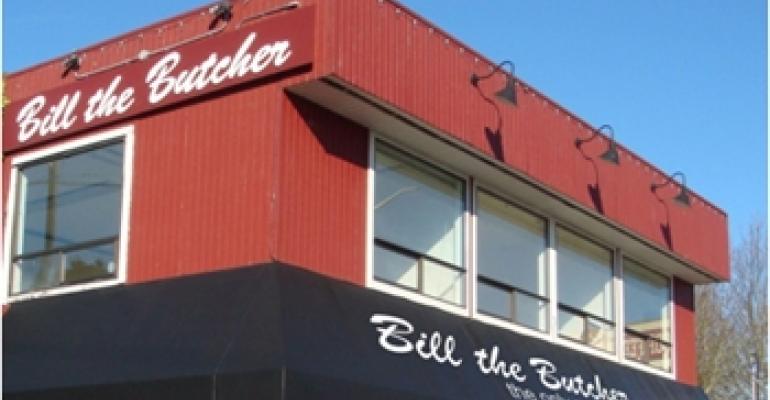 Seattle-Based Butcher Shop Makes a Splash from the Start

In an era when organic and natural products have become a cultural obsession and when successful retailing appears to be about having a unique product offering, Bill the Butcher is making a well-timed entry into the marketplace.

The Seattle-based chain takes its cue from the quaint neighborhood butcher shops of eras past, but puts a new spin on the idea by selling organic and natural meat that has been locally grown. Its products include free range poultry, organic beef, handmade sausages and raw milk, among other things.

Bill the Butcher’s CEO and Co-Founder J’Amy Owens says she first got the idea for the chain while creating a retail distribution strategy for a farm in Virginia. Owens has 25 years of experience as a retail strategist, with a specialty in creating new prototypes. In the past, she’s worked with firms ranging from Starbucks and McDonald’s to Home Depot and Nike. As a result, when she saw a herd of grass-fed cattle on the farm, her mind immediately started gauging the viability of a butcher shop that sold organic and natural meat.

The first Bill the Butcher store opened its doors in Woodinville, Wash., in August 2009. The company now operates six locations in the Seattle area with a seventh under construction. Going forward, Owens and her partner, William von Schneidau, a professional chef, plan a major regional, than national expansion. Over the next four to five years, they would like to open up to 125 stores—representing almost a 2,000-fold increase from their current store fleet.

This is where Owens’ considerable experience in retail has come in handy. The first Bill the Butcher location was self-financed. In early 2010, however, Owens bought a public shell company based in Nevada and merged her new retail concept with the shell. This allowed Bill the Butcher to become a publicly traded retailer, opening up easy access to capital. The chain currently trades under the stock symbol BILB. It has recently reached $2 million in gross revenue, Owens says.

The most recent financial report on the company’s website dates to third quarter of 2010 and there are no year-to-year comparisons as Bill the Butcher has been in operation less than two years. As of Feb. 16, Bill the Butcher Inc. had a market cap of $23.9 million and its stock was trading at $1.01 per share.

While setting up financing on one front, the chain’s management also began what it calls a “grassroots” marketing campaign coupled with social networking efforts to introduce itself to potential customers. Bill the Butcher sponsored local Little League games and provided meat for neighborhood barbecue events. It also set up a website and Facebook and Twitter accounts. Today, Bill the Butcher has about 2,000 followers and fans between its Facebook and Twitter profiles, Owens notes.

The chain’s core customer, in Owens’ view, is someone who is interested in both a healthy lifestyle and the environment at large, since Bill the Butcher puts an emphasis on working with local farmers. The chain also uses green and recycled materials for store build-outs.

When talking about potential future locations, Owens mentions places like San Francisco, Berkley and Palo Alto. In 2011, Bill the Butcher’s management would like to open 14 new stores. After that, Owens foresees entry into California and other states on the West Coast, followed by Texas.

With major expansion on the horizon, the company recently appointed an in-house director of real estate, but Owens has significant input into decisions on where to put new stores. In her view, Bill the Butcher’s main competitors are grocery stores, especially those like Whole Foods that specialize in organic and natural food, so she prefers to stay away from centers that already feature a grocer.

“We are a neighborhood grocery store and we’d like to be the ultimate grocery trip,” she notes. “We are looking for neighborhood shopping centers that are between our customers’ home and a [larger] grocery store.”

Bill the Butcher’s stores normally measure 2,200 square feet or smaller, and can be found in both urban and suburban locations, on the going-home part of the road. The chain goes after sites in densely-populated areas with average household incomes of at least $75,000 a year.

Because Bill the Butcher’s management prefers to have at least a few parking spaces in front of the stores and because Owens feels that older properties tend to have more character, it often signs leases for freestanding class-B buildings formerly occupied by retailers like 7-Eleven. Bill the Butcher sets aside about $100,000 for each new store to upgrade the property and put its own identity on it, Owens notes. As of now, the company signs shorter-term leases—ranging from three to five years.

The stores bring a welcome pop of color and warmth to their neighborhoods, according to Skip Buchanan, one of Bill the Butcher’s current landlords. Buchanan and a partner own a property in Redmond, Wash., where the chain opened a 2,100-square-foot location about a year ago. The space used to house a drapery company. Buchanan now shops for meat at the store.

“It has a boutique feel,” Buchanan says. “Bill the Butcher came in and invested money [in the property] and turned the space into quite an interesting retail operation. The store seems to be doing very nicely and people are very excited that they are here.”

In fact, the chain seems to be acquiring some branding power. Recently, one of its landlords paid for the build-out of a new store—a first for the company, according to Owens.

“Landlords love the concept,” she says. “We really are a community builder.”

As the chain’s management begins to contemplate expansion out-of-state, Bill the Butcher has started negotiations with a number of real estate services providers to help it find appropriate locations. Owens’ main requirement at this point is that the brokers should be well familiar with their markets. The chain hasn’t yet made a decision on which real estate company will be representing it going forward.