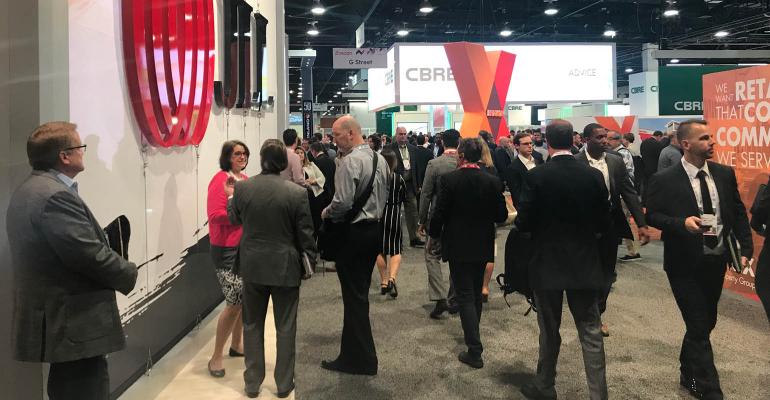 Six Takeaways from RECon 2018, Day One

The first exhibition day at the International Council of Shopping Center’s (ICSC) annual RECon conference in Las Vegas—the largest convention for those in the retail real estate industry to meet, network and make deals—was dominated by one major theme: change.

And the change, according to several experts on the convention floor, appears to be coming from many different directions: the rise of non-traditional retailers, the demise of traditional chains, the necessity to rethink retail concepts and how people will shop and live in the future.

Despite these question marks, many industry insiders described the show’s atmosphere on Monday as optimistic, citing these challenges as opportunities for creativity. Schedules for meetings were as full as in previous years, they said, and booths appeared to bustle with activity. “People are positive. Retail sales are good,” says Holly Rome, executive vice president and director of national retail leasing for real estate services firm JLL.

Still, some other retail real estate professionals said attendance appeared lower than during previous years, noting some exhibition space was empty and that not as many traditional retail tenants—mainly fashion retailers—were exhibiting this year. However, mall giant Simon Property Group had booth at the conference floor, in addition to holding off-site meetings, after years of holding RECon meetings elsewhere. And the reality of the challenges facing the industry—e-commerce competition and large retailer bankruptcies, for example—are on attendees’ minds. “I think people are concerned,” says Gary Albrecht, co-chairman of the real estate department at law firm Cole Schotz.