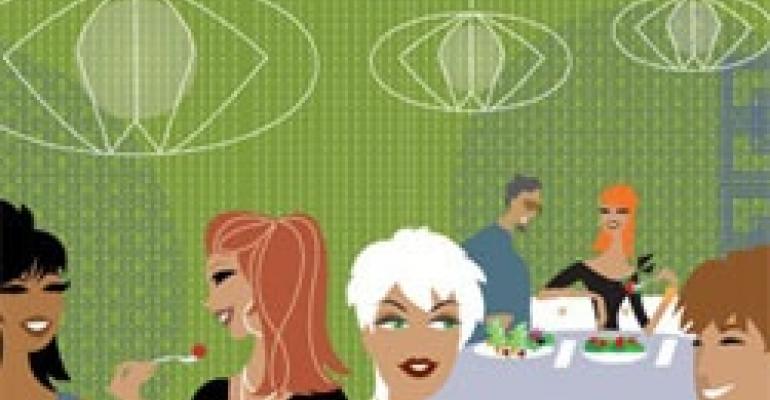 With the restaurant industry expected to take in record sales this year of $537 billion, food concepts — from upscale to casual to fast food — have become more integral than ever to shopping centers. Lifestyle centers and mixed-use projects showcase restaurants as major traffic generators. And developers have even taken older regional malls that used to only have food courts buried deep within and appended them with pad site restaurants and others adjacent to mall entrances.

Still, the food business is fickle. Concepts hot one year can quickly see traffic peter out the next. Even established restaurant players, like Dallas-based Brinker International, which operates perennial favorites Maggiano's, Chili's, On the Border and Macaroni Grill, have made missteps along the way, launching seemingly sure-fire concepts that died quick deaths.

And today, in fact, the restaurant industry as a whole has seen a quick change. Two years ago, casual sit-down concepts were all the rage. And while some of those players continue to perform well, another sector — quick casual — has moved to the forefront. Restaurant research firm Technomic Inc. says in 2006, sales at quick casual restaurants rose 13 percent whereas sales at casual dining establishments grew 8 percent for the year.

Quick casual operators — epitomized by the rapidly growing Denver-based chain Chipotle — have revitalized a sector once seen as just a small step up from traditional fast food. Aaron Allen, founder and CEO of Quantified Marketing Group says the emergence of quick casual has been one of the dominant trends in 2007. The firm's 2007 Restaurant Trends Forecast report highlighted that trend.

Casual dining chains have struggled all year to post same-store sales gains particularly as consumers have demanded more for their money. In August, same-store sales at quick-service restaurants — which include both fast food and fast-casual chains — rose 2.3 percent. But at casual dining chains, same-store sales rose only 0.3 percent. Overland Park, Kan.-based Applebee's International Inc., for example, in August, saw same-store sales at company-owned restaurants fall 1.6 percent, reflecting a decrease in guest traffic of between 6.0 percent and 6.5 percent. “They really haven't gotten their culinary act together to get with the trends,” Allen says. As the company struggled, it explored strategic alternatives, which resulted in IHOP Corp. agreeing to buy the troubled chain for $2.1 billion earlier this year.

As consumers have begun to feel more disenchanted with their neighborhood casual dining joint, quick casual concepts have come to the rescue. The quick casual industry is now much more than counter concepts. Instead, restaurateurs have realized that they can give diners more options, including table service, more upscale décor and healthier ingredients while still keeping prices down and preparation time short.

One of the biggest reasons for the surge is simple, analysts say — time. “Today's consumer is time-starved,” says Paul Fetchser, president of New York-based Great American Brokerage Inc. “Who works 40 hours a week?” Fetchser says the family dinner has changed as working parents have less time to cook. “People no longer hop in their cars and drive 40 minutes to have dinner,” he adds. “Dining is out, eating is in.” That mindset can be a boon to developers as well since quick casual restaurants are designed to turn tables quickly and can offer shoppers something to eat in the “shoulder period”; the period between major mealtimes. “They're able to get their customers in and through quickly,” says Bryant Siragusa, national director of mall restaurants and entertainment for CBL & Associates Properties Inc.

The trend toward quicker meals has coincided with the nation's obsession with eating better. As obesity statistics rise, consumers have become more and more conscious of what they eat — and they expect restaurant companies to do the same.

In 2007, it was the quick casual sector that really seemed to be listening. Newer concepts focused on healthy foods like Chopped, a small chain of salad-centered restaurants in Tucson, Ariz., have grown quickly. More established concepts that have boasted healthier or more natural ingredients, like Chipotle, have seen sales skyrocket. Restaurants sales at Chipotle, for example, grew 34 percent in the second quarter. The company has opened 60 restaurants in the first half of this year. In comparison, by the end of the first six months of 2006, the company had only opened 29 new restaurants. It plans to open up to 120 before the end of 2007.

Irvine, Calif.-based El Pollo Loco, a chain that boasts its flame-grilled food is freshly prepared and healthy, is an up-and-coming concept. It is located mainly on the West Coast, but it's making a bid to expand across the country. The company has opened 18 restaurants so far this year and is scheduled to open a total of 30 new restaurants before year's end.

Besides healthy eating, quick-service chains that cater to a specific niche have done well in the past year and experienced significant growth. Pei Wei, an Asian quick casual concept from Scottsdale, Ariz.-based P.F. Chang's China Bistro Inc., is one example. Robert W. Baird & Co. analyst David Tarantino noted that the chain increased its units by 39 percent in 2006 and is targeting a 35 percent increase in 2007.

Revenue at Pei Wei grew nearly 39 percent in the firm's second quarter and the company is expecting sales to rise 37 percent for its fiscal year.

Despite the revenue growth, Pei Wei disappointed some investors by not meeting its internal revenue projections in the second quarter. The chain's same-store sales grew 1.0 percent in the quarter and the company expected growth of 1.7 percent. Although the chain lowered its expectations for same-store sales growth to 0.8 percent for the full year from 1.4 percent, it made no change to its expansion plans.

Krispy Kreme — based in Winston-Salem, N.C. and once a Southern staple — tried to go national in the late 1990s. The company conducted an IPO in 2000 to raise cash and then rapidly opened units across the country. But it stumbled badly. It opened locations with much bigger footprints than it needed. Moreover, customer tastes changed quickly. At the time it went public, Krispy Kreme's popularity was cresting. But then the low-carb fad exploded. And sales of Krispy Kreme doughnuts — notoriously decadent and dripping in calories — plummeted. Moreover, just as it was opening stores, the chain was expanding its presence in supermarkets, offering boxes for sale at dozens of grocers. That too cut into sales as customers passed on its stores hot and fresh doughnuts for pre-packaged ones.

The company's management ran into more problems when the SEC came calling in 2004 after allegations surfaced that the chain was “channel stuffing,” or sending some stores twice their regular shipments at the end of a quarter to make its numbers.

As a result, Krispy Kreme ended up shuttering many of its locations. Now it is searching for smaller sites to reduce its costs.

Even in the casual dining sector, smaller spaces are becoming standard. “I have seen most of the chains coming out with a smaller footprint,” Siragusa said. That allows the national chains to move to retail centers in mid-size and small markets, which usually don't have as much space.

Brinker, for example, said in September it opened two new On the Border restaurants in August with footprints of about 4,000 square feet rather than the usual square footage of between 4,000 and 5,700 square feet. Brinker has said it is hopes the smaller footprint design will help deliver better operating performance at the new locations.

Another issue is picking the right sites. Some chains that have been popular with consumers have had problems because of poor site selection strategies.

Sandwich chain Quizno's is one example of what can go wrong when a company grows too quickly. After going public in 1994, the chain grew to 5,000 restaurants.

In August, however, the first of several class action suits was filed against the chain on behalf of about 5,000 Quizno's franchisees across the country alleging the company defrauded its franchisees by building the brand at the expense of operators. The suit alleges the company mandated that franchisees buy supplies at inflated prices and did not tell prospective franchisees all the facts about locations. The company has filed motions to dismiss the suits.

At Original SoupMan, made famous by the cranky soup chef on Seinfeld, some franchisees are becoming disgruntled with the company's management for opening too many stores too fast.

The company now operates 34 stores and plans to open another six by the end of the year. But several franchises are beginning to close in New York City, Boulder, Colo., and Myrtle Beach, S.C. among other locations.

The company says it is fine-tuning its growth plan domestically, but it hasn't shelved plans to expand internationally. The chain is looking to add 50 units in Britain at some point in the future.

Trading up in casual

Casual dining establishments have made adjustments to try and better compete with the fast-rising quick casual segment and carve out their own niche in the industry. Many of these chains are changing their brands to cater more to the higher-income crowd. “What's prevailing is quality more so than value,” said Terry McEwen, president of Poag & McEwen Lifestyle Centers LLC. “Some of the more successful restaurants are your higher priced ones.”

Tristano calls these reinvented casual dining chains “polished casual” restaurants. The defining features, he said, include a more adult experience and a higher check average. Check averages at these chains typically range between $20 and $50 per person. For example, at Newport Beach, Calif.-based Fleming Steak House, the average check is about $50 per person.

Chains that weren't already in this space have started spending money to get there. Ruby Tuesday Inc., a mall staple based in Maryville, Tenn., has embarked on a remodeling program that includes virtually every facet of the exterior and interior. The upgrade has coincided with a new more upscale menu. Ruby Tuesday is planning to remodel about 450 to 500 of its restaurants in 2008.

The restaurant industry is far from insulated from the problems facing consumers in today's economic environment and some signs seem to indicate the situation may be getting worse.

In September, consumer confidence shrunk to its lowest point in nearly 18 months. The RBC Cash Index, which is based on the results of international polling firm Ipsos, had its worst showing since May 2006. “The best way I can describe the economy is cautiously pessimistic,” says Dennis Lombardi, executive vice president of food-service strategies at WD Partners, which designs and develops stores for retailers and restaurant operators.

To developers, though, he said, “a six-month or eight-month blip in the economy should not be a major problem.” It is, however, important in terms of choosing a concept. Lombardi says retail developers are now looking for “durability and maturity” in a brand to make sure it can be a success with consumers.

Even as consumers weigh their options, developers still see restaurants as a no-brainer. Restaurant companies, meanwhile, aren't putting a stop to development. “We really haven't seen a slowdown in terms of demand for locations from restaurants,” says Siragusa. It seems restaurants — whether upscale casual dining or quick casual niche concepts — are here to stay in retail locations. “Every five hours, you get hungry,” Lombardi says. “Restaurants are still going to make important tenants.”