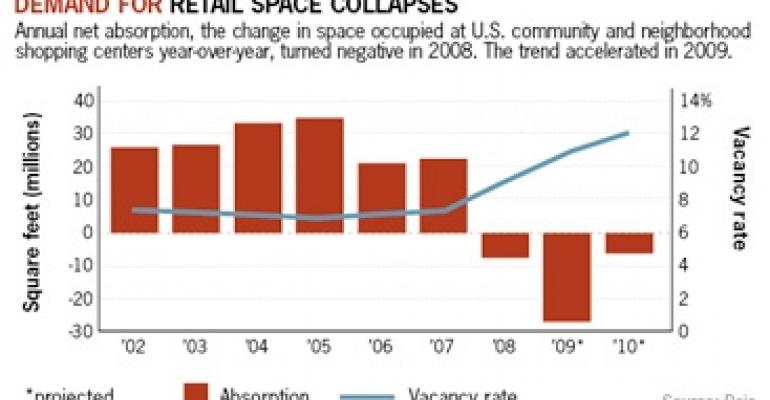 Tsunami of Foreclosures In Doubt

The shopping center industry could get a reprieve, thanks to revised FDIC guidelines on bank loans.

With consumer sentiment flagging and job losses mounting, the road ahead isn’t getting any easier for the shopping center industry. It’s hard to put a dismal 2009 in the rear-view mirror when property fundamentals are still falling.

Signs of borrower distress are growing, even as the federal government takes new steps to prevent a commercial real estate crash. Retail loans accounted for 30% of the $31.7 billion delinquent unpaid balance in commercial mortgage-backed securities in September, according to Realpoint LLC, a Horsham, Pa.-based credit rating agency.

The default rate on retail CMBS loans rose to 4.2% in September, up from 3.95% in August and 0.6% a year ago, reports Realpoint. Continued weakening in retail performance could lead to more store closures and loan defaults, and bankruptcy filings could grow further. Announced store closings this year totaled 4,283 through mid-October, according to NREI’s sister publication, Retail Traffic.

But perhaps all is not lost. The Federal Deposit Insurance Corp. recently relaxed its guidelines to enable banks to classify loans as performing even if the market value of the underlying real estate has fallen sharply, provided that borrowers are current on their loan payments.
Separately, the Internal Revenue Service modified rules concerning real estate mortgage investment conduits, effectively giving special servicers more latitude to restructure securitized loans.

“The big story is what happens in the commercial mortgage market over the next year,” says Sam Latone, president and co-CEO of The Shopping Center Group, an Atlanta-based brokerage that serves as the leasing agent for 600 retail centers in the Southeast, or about 50 million sq. ft.

“Clearly, if you look at the response of the [government] to the traditional banks, it’s been to the extent that if you can work with your borrowers and extend loan maturities because of maturity default, do so. To the extent that’s the direction, from my perspective we’re not going to see the tsunami of foreclosures that we’re all worried about,” says Latone.

Adapting on the fly

With new development opportunities all but dead in this tough lending climate and weak economy, firms like Columbia, S.C.-based Edens & Avant are redeveloping older centers. Merchant’s Walk, a 335,000 sq. ft. power center located in the affluent northern Atlanta suburb of East Cobb is a prime example. Built in 1976 and redeveloped in the 1990s, the center is now in the midst of a $20 million makeover aimed at creating a more pedestrian-friendly environment.

Edens & Avant, which owns 140 centers in 14 East Coast states and has a portfolio-wide occupancy rate of 92%, is playing both offense and defense on the redevelopment front, says Terry Brown, CEO of Edens & Avant. The approach is a way to raise the profile of aging shopping centers, reconnect with local communities and fend off the competition.

“You have an opportunity now to re-establish those as dominant centers,” says Brown. “They are centers that might have been at risk if there was a lot of new development nearby.”

Silver lining in the clouds

The national vacancy rate for neighborhood and community shopping centers rose to 10.3% in the third quarter, up 190 basis points from a year earlier, according to New York-based real estate research firm Reis. The forecast is for vacancy to peak at 12.5% in 2011.

Latone believes the shakeout among retailers in several merchandising segments is healthy. The survivors will eventually need to plan for future growth.

“The development process can be a 24- to 36-month lead time,” says Latone. “Retailers that want to start to see some store openings take place in 2012 and 2013 are going to have to get serious about putting together programs to accomplish those goals next year.”