What Will Rite Aid Divestitures Mean for Net Lease Investors?

When a retailer announces that it will sell off about 1,200 stores in order to take its business to the next level, these days the assumption is that the company is struggling to stay afloat and needs to quickly shed excess weight and curb costs.

In Walgreens Boots Alliance’s case, however, the sale of more than 1,000 Rite Aid locations will help the former meet regulatory approvals before completing its planned $7.4 billion merger and expanding its footprint across the United States.

The deal was announced in October 2015, and was recently amended to reflect Walgreens’ plan to sell off the stores to satisfy regulatory requirements. The parties also settled on a per share price between $6.50 and $7.00.

But in an environment where retailers across all categories are feeling the effects of previous years of overbuilding, industry insiders are left wondering who will buy the properties, and how the stores will be used after they are divested? Virtually no Rite-Aid stores changed hands during the third quarter of 2016, according to data from Calkain, a research firm based in Herndon, Va. Owners of net-leased Rite Aids were likely holding onto their properties until they understood how the proposed merger with Walgreens would evolve, says Vinky Marolia, a research analyst with Calkain.

Cap rates on both Walgreens and CVS stores increased by 58 basis points and 46 basis points, respectively from the previous quarter, according to Calkain data. Sales of Rite Aid locations made up only 13.0 percent of all transactions. During the period, Rite Aid units experienced a 67 basis point drop in cap rates, a rate movement that is uncharacteristic for the retail pharmacy sector.

Investors began buying Rite Aid locations again in the fourth quarter. Going forward, some industry professionals believe that 1031 exchange investors are likely to be among the most active Rite Aid store buyers, according to Tim O’Brien, managing partner at Calstar Partners, a real estate services firm and investor based in Laguna Niguel, Calif.

“They have to buy a property within a certain time frame to complete their exchanges,” O’Brien says. He adds that such investors end up overpaying for the properties—which trade at between $200 and $400 per sq. ft., according to Calkain,—because they are under deadline pressure to complete their exchanges within the legal window. Calstar, a more strategic buyer, would consider $200 per sq. ft. a worthwhile price for a Rite Aid location, O’Brien notes.

Much of the subdued trading of Rite Aid properties stems from the fact that Walgreens has not identified which Rite Aid stores it will divest of or close during the merger.

Rite Aid properties have always traded at higher cap rates than Walgreens or CVS units because the company has not had a lot of new store development in the last 20 years. The company has a weaker credit profile than its two larger peers in the business, according John Feeney, a vice president at Boulder Group, a boutique investment real estate services firm specializing in single tenant properties based in Northbrook, Ill., but Rite Aid properties have several important merits independent of being fodder for 1031 exchanges. The stores are usually triple-net-leased and often occupy high demand corner locations. That might explain why cap rates on the properties have generally been dropping, even if cap rates on Walgreens and CVS properties are still tighter, according to Calkain’s data.

Rite Aid has one more important attraction to investors: its store locations rarely overlap with those of Walgreens. In a merger analysis, Calkain found that 63.2 percent of Walgreens stores were more than three miles away from the nearest Rite Aid location. Only 5.0 percent of Walgreens stores were located between one quarter and a half of a mile of a Rite Aid. Those Rite Aid locations are likely to be scrutinized more closely than others, especially if they are older and perform poorly.

As for how potential buyers could backfill Rite Aid locations that do end up being listed, industry professionals suggest that CVS and Walmart Neighborhood Market could potentially take over the spaces. 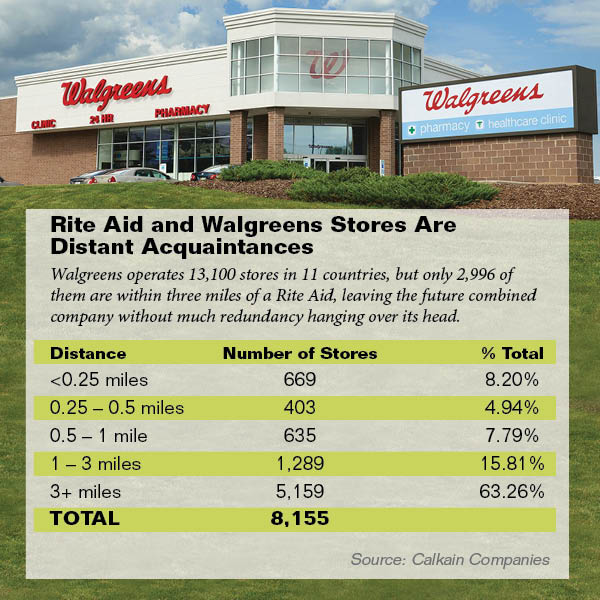