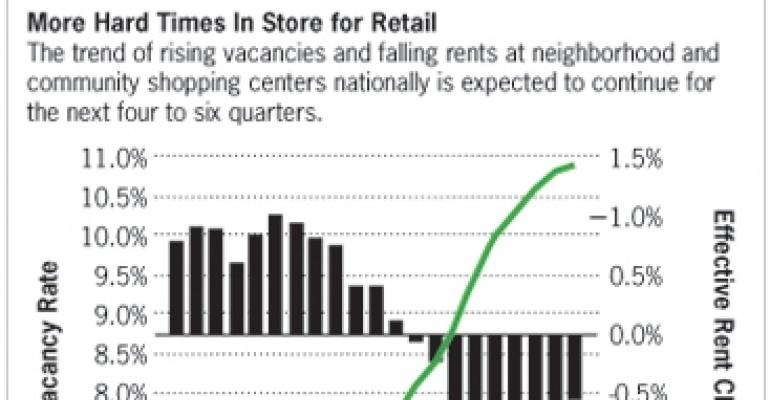 When will the retail sector recover? The answer depends on how recovery is defined. Property owners consider a drop in vacancies and a reversal from negative to positive rent growth as the first signs of a recovery. Some investors define recovery as the point at which rents return to their previous peak levels.

For investors and researchers who focus on transaction prices, the sector won’t fully recover until property values creep up to pre-2008 levels.

Preliminary second-quarter data from Reis offers some insight as to where the U.S. economy might be in the business cycle, given these different definitions of recovery.

Investors should expect retail rents and occupancies to continue to slide for the next four to six quarters, with vacancies stabilizing and rent growth turning positive sometime in late 2011 or early 2012.

Effective rents nationally will not recover to peak levels reached in 2008 until approximately 2016. Property values may not return to 2007 levels until after 2016, despite news over the past six months of a sliver of stabilized, Class-A properties selling at capitalization rates unseen since 2006.

The continuing plight of retail properties in the second quarter reflects the tepid, uneven pace of economic stabilization and recovery. Real estate fundamentals at neighborhood and community centers continued to slide at the national level, with the market giving up 1.85 million sq. ft. of occupied space.

Developers also have pulled back, bringing less than 400,000 sq. ft. of strip mall space on line, the lowest quarterly level of new completions on record since Reis began publishing quarterly data in 1999.

The decline in occupied space pushed vacancy levels to 10.9% in the second quarter of 2010, slightly under the 11% vacancy level last seen in 1991. Asking and effective rents continued to decline, falling by 0.3% and 0.5% respectively.

Larger property types like regional malls were not spared. The second-quarter mall vacancy rate of 9% is the highest on record since Reis began tracking regional malls in 2000.

Given that Reis doesn’t expect rents to resume positive growth until 2012, it is not surprising that we may need to wait until 2016 before we claw our way back to previous rent peaks attained in early 2008.

The question of when property values will revert to previous heights is a tougher issue given the unpredictability of the ebb and flow of investor sentiment. Currently there is a small sliver of properties changing hands at cap rates ranging between 5% and 6%, levels unseen since 2006.

These properties tend to be Class-A properties located in primary markets, or gateway cities with a stabilized roster of tenants boasting long-term leases with little rollover risk.

However, there have been few of these low cap-rate transactions, and average prices have yet to show an increase. Among neighborhood and community centers that changed hands in the first quarter of 2010, the average sales price was $133 per sq. ft., down about 35% from peak levels in 2007.

The next six to 12 months will require investors to make key assessments and decisions about prices and timing. Are Class-A retail properties now trading at prices that negate the prospects of quick appreciation? Should they begin investing in riskier properties in tertiary markets that might hover at lower price points?

Armed with the knowledge that rents are expected to turn positive by 2012 nationally, that a return to peak rent levels will occur by 2016, and that valuations will not return to their peak levels until after 2016, smart investors can maximize their opportunities in the retail sector.