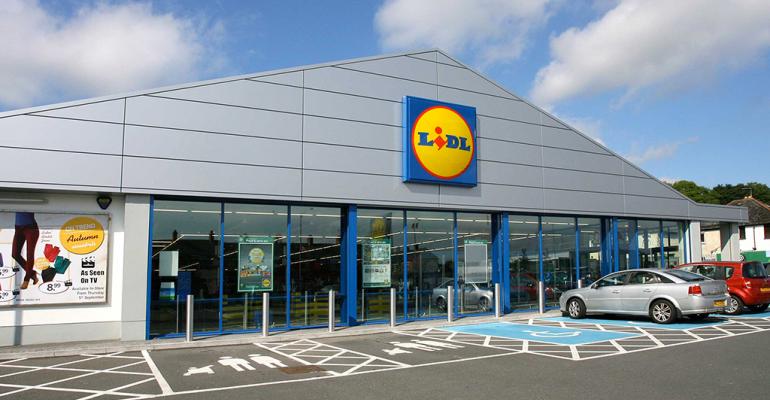 Will Lidl Cause a Major Disruption to Traditional Supermarkets?

Lidl’s pared down approach with a pop of wine, bakery and specialty items is expected to draw shoppers, but not siphon off a great deal of business from more traditional grocers.

The looming battle between German supermarket operators Aldi and Lidl for a share of the U.S. market is getting into high gear.

In mid-June, the Neckarsulm, Germany-based grocery chain Lidl began opening the first 20 stores of its planned 150 locations in the U.S., an expansion that retail real estate professionals have anticipated with both curiosity and some wariness about how the brand will impact the U.S. grocery market. The company already has two distribution centers in the Southeast, to support stores in Rocky Mount, N.C.; Greenville and Spartanburg, both in S.C.; and Virginia Beach, Va.

The company hopes to appeal to a wide range of shoppers—from patrons of fresh artisanal breads to the nightly meat and potatoes crowd—with its simple store layouts and offerings pared down to just six aisles of carefully selected items.

Based in Essen, Germany, Aldi also sells groceries in stores with a simple layout, with an occasional selection of specialty items at the center of the store, such as household or gardening items. The similarities set up a potential battle for the two companies in a market where supermarkets are already a highly sought-after anchor for grocery-anchored shopping centers.

Yet the two chains are different in notable ways. For Lidl, coming to the U.S. represents a major test for a company headed in a new direction. Lidl has a new CEO in Jesper Hojer, a 10-year veteran of the company. Hojer is expected to lead the U.S. expansion with a new store format too.

Aldi has a 41-year head start in the U.S., with an existing 1,600-store portfolio here. Recently, however, the company has been preparing to mount an aggressive strategy to spruce up its existing locations and open 900 new ones over a five-year period.

In February, the company announced plans to invest $1.6 billion in an extensive remodel and expansion program. Aldi claims that it serves more than 40 million customers each month, a 60 percent increase since 2013, when current CEO Marc Heubinger took the helm of the company.

Landlords expect that Lidl will take a bite out of the U.S. grocery market, but they do not see a major disruptor in the brand.

“They obviously didn’t get the message that it is the end of retail,” said Andrew Alexander, CEO of Weingarten Realty during NAREIT’s 2017 REITWeek. “They are offering a very basic concept, and I think they’ll take a part [of the grocery market].”

The company will most likely own freestanding stores, according to John Feeney, vice president with The Boulder Group, a Northbrook, Ill.-based commercial real estate brokerage specializing in the net lease market.

At 20,000 to 30,000 sq. ft., Lidl stores are larger than Aldi locations, Feeney notes. They feature an on-site bakery and a carefully curated section for wines. Lidl also features a so-called surprise section, where the chain sells an ever-changing selection of non-grocery specialty items like shoes or kayaks. All told, Lidl’s pared down approach with a pop of wine, bakery and specialty items is expected to draw shoppers, but not siphon off a great deal of business from more traditional grocers.

“It is not going to take over the traditional grocery model,” Feeney said. “There is always going to be a need for that and for specialty items.”