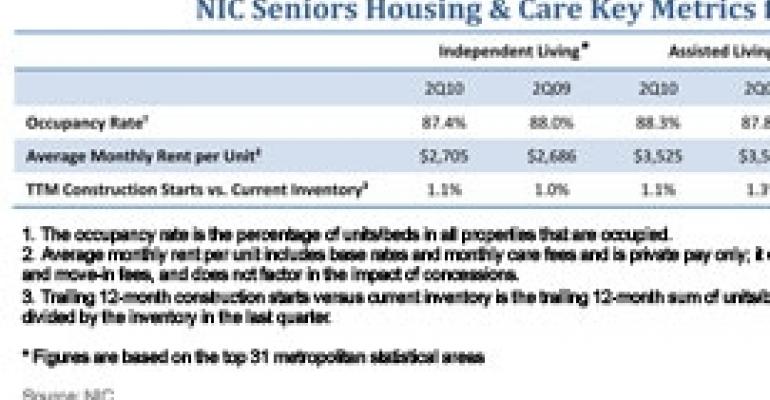 Assisted living continues to outperform other segments of seniors housing due to a combination of growing demand and limited new supply, according to the National Investment Center for the Seniors Housing and Care Industry (NIC) based in Annapolis, Md. While rents are rising across all product categories, the pace of rent growth is slowing.

The occupancy rate at assisted living properties rose to 88.3% in the second quarter, up 50 basis points from the same period a year earlier, according to NIC’s analysis of the nation’s top 31 metropolitan statistical areas. The average monthly rent at assisted living properties rose 0.7% during the same period to $3,525. That follows a 1.4% rent increase in the first quarter.

“The number one point is that the fundamentals in this asset class are holding up much better than a lot of other property sectors,” says Michael Hargrave, vice president of NIC MAP, which tracks key metrics in seniors housing quarterly and provides that data to owners and operators, developers, lenders and other interested parties. Hargrave is referring to the troubled hotel, multifamily, office and retail sectors, where loan delinquencies continue to climb as net operating income contracts.

Indeed, on a trailing 12-month basis the number of construction starts in units for assisted living in the second quarter was 1.1% of current inventory, down 20 basis points from the same period a year ago.

The real estate fundamentals at independent living properties in the nation’s top 31 markets reflect strengths and weaknesses. On the plus side, the average monthly rent registered $2,705 in the second quarter, up 0.7% from the same period a year earlier. On the down side, occupancy declined 60 basis points in the second quarter to 87.4%.

The inventory of nursing homes has remained fairly static, says Hargrave, due in part to the challenges at the state level of securing a certificate of need for a facility. Construction activity across the seniors housing sector has bottomed out, Hargrave says. He anticipates the growth rate of new construction to be about 1% annually for the foreseeable future.