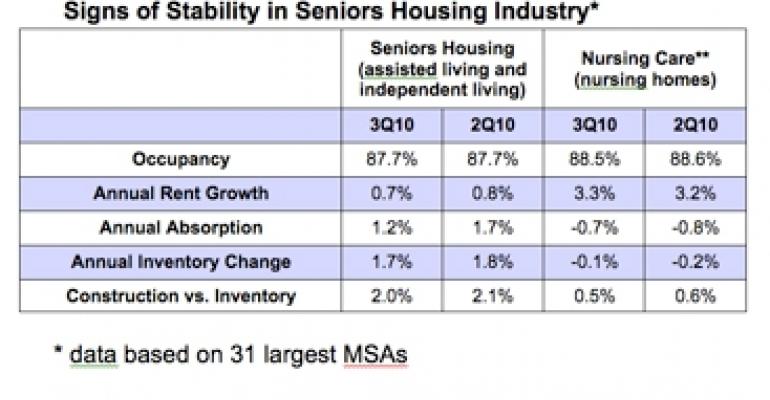 While the seniors housing industry is showing signs of stabilization after a deep recession, the recovery remains choppy with assisted living outperforming independent living on the occupancy front, according to newly released data from the National Investment Center for the Seniors Housing & Care Industry (NIC).

The two divergent trends effectively canceled each other out. The average occupancy rate for seniors housing ended up at 87.7% in the third quarter, unchanged from the prior quarter (see table). Meanwhile, the average occupancy rate at nursing homes ticked down a hair from 88.6% to 88.5%, adds NIC, a nonprofit education and research organization based in Annapolis, Md.

“It appears that the assisted living sector — really for the first time in several years — has switched into a recovery mode a little bit, while the independent living sector is still searching for a bottom,” says Michael Hargrave, vice president of NIC’s Market Area Profiles Data and Analysis Service.

What are the driving factors? Historically, occupancies at assisted living facilities have been at their highest levels in the second and third quarters, explains Hargrave. The assisted living segment also is benefitting from construction delays that have pushed back the scheduled completion of several projects to the fourth quarter.

“There was very little inventory growth for assisted living in the third quarter of 2010, whereas independent living still had a number of new properties and new additions open up,” emphasizes Hargrave.

A percentage point change in the occupancy rate can have a dramatic effect on a property’s bottom line. “Obviously it depends on your leverage levels and your operating expense profile, but every point of occupancy is important from the standpoint of debt-service repayment, or the top-end incremental dollars to your bottom line,” says Hargrave.

Concessions have played a factor in the slowing of rent growth, says Hargrave. A growing number of property owners are doing what he calls “rent adjustments,” meaning that they are lowering their asking rents. “About 18% of all the properties that report to us had adjusted their market rents down this quarter from a year ago. All of that is contributing to a slower pace of annual rent growth,” says the veteran researcher.

The annual increase in private pay rent at nursing homes was 3.3% in the third quarter compared with 3.2% in the second quarter. Generally speaking, there is much less price elasticity at nursing homes than at independent living or assisted living facilities. One reason is that skilled nursing care is quite labor-intensive. Nursing homes often are providing end-of-life care, explains Hargrave. “At that point the price points are much less important to prospective residents and families than they are in assisted living and independent living.”

Annual absorption at assisted living and independent living properties rose 1.2% in the third quarter, down from 1.7% in the second quarter. Still, that’s a big improvement over an extended soft patch stretching from the first quarter of 2008 to the fourth quarter of 2009 when the annual pace of seniors housing absorption was below 1%. The third quarter marks the third consecutive quarter that annual absorption has been above 1%.

At nursing homes annual absorption was a negative 0.7% in the third quarter compared with a negative 0.8% in the second quarter. One reason for the slide is that consumers have alternative options from which choose such as home health care or assisted living on the private pay side, points out Hargrave.

The annual inventory change among nursing homes also has been on the decline, falling 0.2% in the second quarter and 0.1% in the third quarter. “That trend of marginally negative absorption and marginally negative inventory growth has been in place for a while now. That [nursing home] industry is on a slow, almost deliberate and steady downsizing.”

Hargrave says one big takeaway from the third-quarter data is that even though supply is still growing faster than absorption in the seniors housing industry (excluding the nursing home segment), a better balance is beginning to emerge. “Those are the building blocks that the industry needs for building occupancy going forward.”