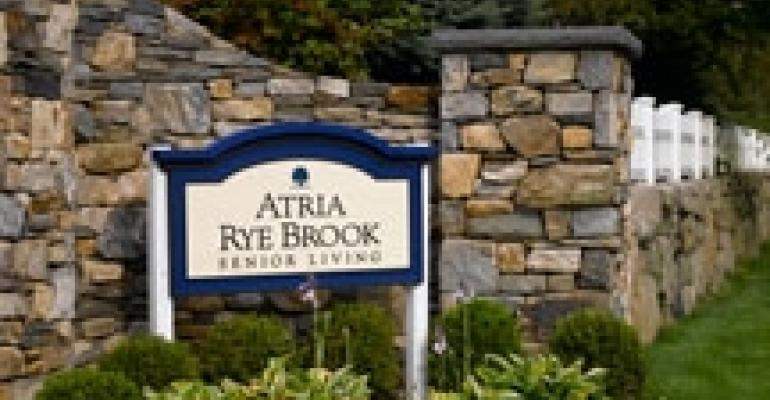 Despite a weak economy that continues to stall building sales, Atria Senior Living Group recently completed the purchase of a 168-unit assisted living building. Sterling Glen of Rye Brook in Rye Brook, N.Y., was purchased for $70 million from Forest City Enterprises. Atria had been the manager of the property.

"What's newsworthy is that we're sticking to a traditional real estate strategy," says John Moore, CEO at Atria. “We think this makes sense."

Atria's strategy is to own the buildings it operates, figuring property in good locations will appreciate in the long run, says Moore. "We like to own property in traditionally strong real estate markets."

The company has more than 14,000 units, mostly located in metro areas with high barriers to entry, including a limited availability of land and operating licenses.

Atria has several other building purchases in the works.

Rents at Atria communities average about $4,000 a month. Occupancies currently average in the mid-80s percentile, a decline from the 2007 peak of the high 80s.

"We're doing OK," says Moore. "Overall, we grew NOI (net operating income) a little last year." But, he adds, "The world is one in which you need to be very cautious."

For now, the focus is on strengthening the company's balance sheet. Atria has refinanced about $200 million in debt over the last several years. The next mortgage debt maturity isn't until 2012, says Moore. But he expects to continue to refinance more properties this year. "We want to keep pushing out those maturities."

"It's important to keep investing in communities," says Moore. "We try to run a high-quality business." When times are tough, he explains, operators can be tempted to cut rents, move a lot of people in, and then cut expenses. "In a business where you are caring for frail seniors, that can end badly."

On a brighter note, Moore says, the assisted living market is coming back to life after grinding to a halt last fall. He doesn't blame the poor housing market for the drop in occupancies. Instead, he thinks consumers were afraid to make any kind of commitment after the September stock market crash.

But now traffic at Atria buildings is picking up. January move-ins were strong, and March looks good too. Moore says, "We're feeling more optimism about the business than we have in a long time."