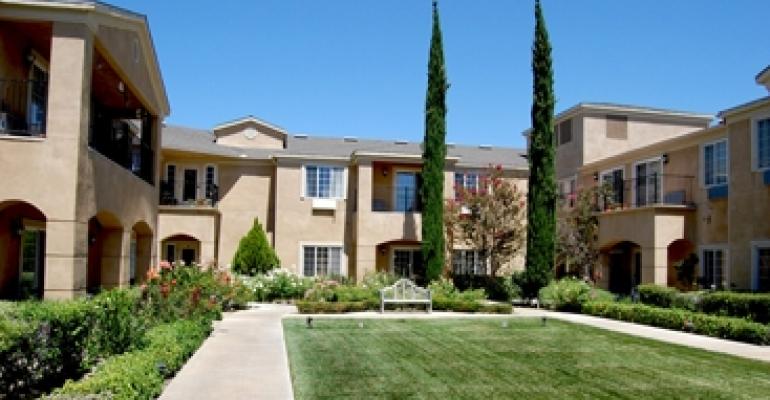 MBK Senior Living recently sold the Sterling at Vintage Hills in Temecula, Calif., for $27 million in a bidding process that included 15 prospective buyers. Among the bidders were several real estate investment trusts (REITs), which have been buying up big portfolios of seniors housing even as the industry continues to struggle with occupancy issues.

The winning bidder for the Sterling was Capitol Seniors Housing (CSH) of Washington, D.C., a private investment firm and affiliate of the Carlyle Group. CSH is a seniors housing owner with 20 assets, mostly concentrated on the East Coast and in California. MBK manages several properties for CHS.

“The price we got exceeded our expectations,” says Terry Howard, president at MBK in Irvine, Calif. “The market is very motivated to acquire Class-A assets.”

The Sterling at Vintage Hills is a 10-acre, three-building property. It includes 51 independent living units, 73 assisted living apartments, and 28 units of memory care, some of which are double occupancy suites.

The property is located on a bluff, overlooking the wine country of Southern California. The average daily rate for an assisted living unit is about $105. The memory care rate is $179. “This is really the highest-quality asset in the marketplace,” says Howard.

How to get top dollar
MBK is owned by publicly traded Mitsui & Co. of Japan. MBK owns and operates seven seniors housing properties and manages three other projects. MBK typically sells properties after a hold period in order to return income to its parent, Howard says. Properties are marketed through a brokerage firm to determine the property’s value and generate multiple bids.

In this case, the broker was CB Richard Ellis of San Diego. Bidders were asked to submit their best offer and then the offers and buyers were evaluated. Counterbids were not accepted after the first round. “We are not an auction house,” says Howard.

In 2005, MBK bought the Sterling for $20.1 million from Koelsch Senior Communities, based in Olympia, Wash. Koelsch built the project in 2000. When MBK purchased the property it had an occupancy rate of about 75%. The occupancy rate was 95% in January when the sale to CSH closed. “Over the five-year period we owned the building, we doubled the net operating income,” says Howard.

Seven bids were seriously considered, Howard notes, and the amounts offered were in a tight range. CSH had the advantage of previous experience with MBK. Also, CSH promised to retain MBK as the Sterling’s property manager.

Cap rates move lower
Capitalization rates for highly desirable seniors housing projects have been falling since last October, experts say. Class-A projects now fetch cap rates in the 6% to 8% range. In a December 2010 survey conducted by NREI and Senior Housing Investment Advisors, respondents expected cap rates to fall an average of 4.2 basis points over the next six months.
(The cap rate is the annual net operating income of a property divided by the purchase price, a formula used to determine the investor’s return in year one.)

Smaller investors wonder whether the REITs could chase them out of the market. “I don’t really see myself competing with the REITs for properties,” says Scott Stewart, managing partner at CSH.

Stewart adds that the REITs are driving up prices in some cases, but they are mostly seeking big portfolios instead of single property deals.

Though MBK was a seller in this case, the company plans to be a net buyer of seniors housing in 2011. MBK will probably purchase five properties this year, says Howard.

MBK is targeting one-off properties in the western U.S. for new acquisitions. “Our long-term growth [strategy] is to have 25 to 30 properties. We are only one-third of the way there.”