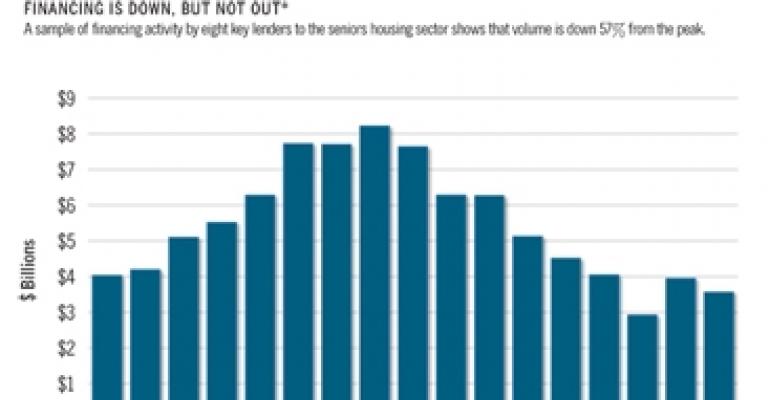 The lack of available capital, especially debt financing, was a much-discussed topic recently at the annual conference of the National Investment Center for the Seniors Housing & Care Industry (NIC). Speakers and attendees alike at the conference held at the Sheraton Chicago Hotel & Towers wanted to know when capital will return to the sector, what the capital vehicles will be, and what capital will cost.

“Capital providers want to embrace the senior housing industry,” noted Kevin McMeen, president of Chicago-based MidCap Financial, one of a number of executives who spoke on the financing issue at the NIC conference. “But getting back to a normal debt capital environment has been painful.”

At the peak of the last cycle, debt financing was plentiful from banks, finance companies, insurance companies, the commercial mortgage-backed securities market, real estate investment trusts (REITs), and the government sponsored enterprises (GSEs)– Fannie Mae and Freddie Mac. Many lenders pulled back during the downturn, resulting in a shortage of capital for the sector.

Even so, a handful of commercial lenders are still financing seniors housing projects. “We’ve had our hiccups,” acknowledged Angela Mago, senior vice president and national manager at Cleveland-based KeyBank Real Estate Capital. The bank currently has a $500 million portfolio of properties in the lease-up phase.

Mago admitted leasing has gone slower than projected and it’s taking longer to recycle capital. And, she added, the bank isn’t doing new construction lending. “We have better opportunities with refinancing and acquisitions,” she said. The bank may contemplate a return to construction lending in a year or two, but only very selectively and with existing clients, Mago added.

Lenders of all types favor experienced operators and owners. Underwriting standards remain stringent. Equity contributions start at approximately 25% and go as high as 40%. Before 2008, contributions started at 15% to 20% and generally did not exceed 25%.

REITs to the rescue?

REITs will continue to be a source of financing, though large deals are being favored over small ones. The recent blockbuster $817 million deal between Merrill Gardens and Health Care REIT, the first of its kind to use a structure that allows the REIT to participate in profits, could alter the way REITs invest in the sector.

These kinds of deals have already had a huge impact on the hotel industry, and the Merrill transaction could be the first of several more big deals between REITs and senior housing operators. “This deal could be a game changer,” said Robert Kramer, president of NIC.

With Fannie Mae and Freddie Mac in government conservatorship, concerns persist about how the GSEs might be reformed. For now, however, the GSEs remain committed to the sector, according to agency executives who spoke at the NIC conference about their programs.

No cap has been set for lending to the sector, points out Schmidt. The agency currently prefers assisted living, memory care and rental continuing care projects with up to as much as 20% skilled nursing units.

Fannie Mae currently focuses on assisted living and memory care. Though there’s an impression that Fannie only lends to big operators, customers range from small to large. This year the agency added 70 borrowers, according to Chris Honn, director of seniors housing at Fannie Mae. The agency must remain diversified from a borrower standpoint, without becoming too dependent on only a few large borrowers, Honn said.

Despite the problems at the GSEs, Honn told conference attendees that negative publicity does not affect their ability to conduct business with seniors housing operators. “We have never had any limitations on our senior housing business,” he said.

Meanwhile, the U.S. Department of Housing’s 232 LEAN Program has grown in popularity, resulting in loan closing delays. Operators should expect a six-month process from application submission to loan closing, according to Mark Williams, senior policy advisor with HUD.

HUD developed its LEAN process in 2008 for Section 232 loan applications in order to streamline lending. The LEAN process has been so successful that the agency will handle 75% more loans this year than last year, worth about $4 billion.

In fiscal year 2009, HUD insured mortgages for 255 projects with 30,155 beds/units, totaling $2 billion. “We are being inundated with portfolio projects,” said Williams. The agency expects soon to receive three large portfolios with more than 100 individual building applications.

HUD officials met with lenders in Seattle two weeks ago to refine loan processing to expedite approvals. “We are trying to figure out how to be fair,” said Williams, adding that the agency’s resources are stretched and money is not available to hire more staff.

A separate queue has been created to accommodate the refinancing of existing HUD-insured loans. These refinancing applications take less time to process than new loans. Another change being contemplated is the creation of a queue for portfolio-type loans. Also, a new queue is being considered for master-lease portfolios because they take extra time to process.

Williams advised borrowers to present “clean” applications, meaning issues related to accounts receivable financing or environmental problems should already be resolved. “Get agreements in place before you are ready to close,” he said.

Looking ahead, McMeen at MidCap Financial thinks the industry has become too dependent on government financing. “It’s an enormous risk to our industry,” he said. The market for debt capital should be more diverse, he argued.

The industry needs to make its investment case, which is a strong one, to a variety of capital providers, such as managers of fixed-income asset pools, the CMBS market, and insurance companies, McMeen said. “Seniors housing is the real estate sweet spot for the next 20 to 30 years.”