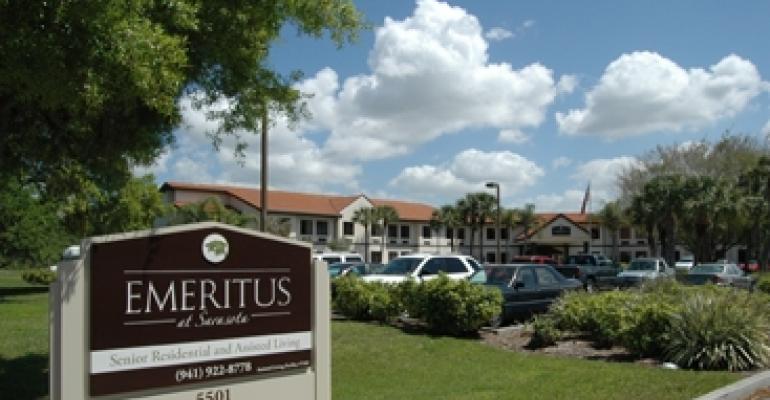 Operating incentives, often in the form of cash, are taking center stage lately as investors seek to boost returns and property managers look to share in revenue gains.

Earlier this month, assisted living owner and operator Emeritus Corp. announced that it has agreed to pay $99 million to take full ownership of 24 assisted living buildings it jointly owns with Blackstone Real Estate Advisors. The deal is expected to close by June 30.

The partners paid $190 million in 2007 for the properties, which are scattered across the country. Typical of the facilities is a 96-unit assisted living and memory care building, Emeritus at Sarasota, in Florida. The properties are now valued at $310 million because of building upgrades and improved cash flows.

The joint venture is structured so Emeritus earns an increasing share of investment returns as building operations improve. The deal foreshadows a much bigger transaction involving Blackstone and Emeritus.

“The structure of the joint venture has been an incentive for us to improve operations,” says Rob Bateman, CFO at Seattle-based Emeritus. “It’s a win-win for all parties.”

Equity investors in seniors housing have used incentives since the 1990s. Seniors housing is well suited to incentives because the facilities serve as operating businesses, enabling a deft manager to significantly improve returns.

Publicly traded REITs like incentives as well. A number of REITs have recently completed deals with operating companies using a partnership structure under the REIT Investment Diversification and Empowerment Act (RIDEA), which was signed into law in 2008.

It allows REITs to keep a share of the building’s operating income and not just the lease payments, while the operator has an incentive-based management contract. Some notable RIDEA deals include the $3.1 billion acquisition of Atria Senior Living by Ventas Inc., and Health Care REIT’s $817 million deal with Merrill Gardens.

Incentives work best with experienced building operators, experts say. Assisted living property managers, for example, must know how to care for seniors, direct a health care staff, and also offer an attractive alternative to seniors who might otherwise stay in their own homes or move to a nursing home.

“The operator (Emeritus) has done a great job,” says David Roth, managing director of the real estate group at Blackstone. Roth won’t comment on Blackstone’s returns except to say the company expects an attractive return on its initial investment. He added that it’s a good time to sell.

Emeritus has worked to boost building occupancies over the last few years from an average of 68% to 88%. “The focus has been on occupancy,” says Bateman at Emeritus.

The company invests about $1 million a year in each property it manages. “We make sure the properties are up to date,” notes Bateman. Operations are also streamlined with new back office systems and marketing programs.

The $310 million portfolio purchase is being financed with mortgage debt of about $220 million, cash of $40 million, and Emeritus’ ownership interest of $23 million. The remaining $27 million is Emeritus’ earned incentive. “We looked at the value of the underlying communities and their operating performance,” says Bateman.

In the first quarter of 2011, Emeritus reported a loss of $22.6 million compared with $14.2 million a year ago due to increased expenses and additional property acquisitions. Company revenue increased 28% to $300.2 million over the same period.

Emeritus has 308 communities. A comparison of same communities shows average monthly revenue per occupied unit grew in the first quarter by 2.1% to $3,796. Same community average occupancy increased 10 basis points to 87.6%.

Looking ahead, Bateman thinks the purchase of the 24 properties bodes well for the much larger, but similarly structured, $1.2 billion Sunwest deal with Blackstone.

Along with a 5% management fee, Emeritus earns cash incentives when it exceeds certain rate-of-return thresholds, and it holds the right of first opportunity to purchase the communities. “If we are successful in improving operations, we have a huge opportunity,” says Bateman.