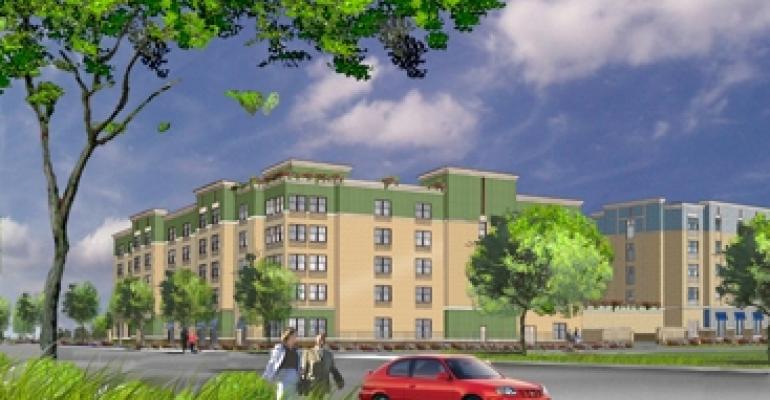 Despite the fact that development activity has slowed in the seniors housing sector, several important building design trends are taking shape, according to a newly released study.

Small clusters of units, or households, are becoming the norm in assisted living projects. New projects are more likely to try and connect residents to activities in the wider community. At the same time, environmentally friendly or green design features are being incorporated into projects.

“There is an increasing diversity in the types of projects being built,” says Stefani Danes, principal in the Pittsburgh office of architecture firm Perkins Eastman, which sponsored the study jointly with the American Institute of Architects. “Consumers have more choice than they did 20 years ago.”

“If you go back and look at seniors housing 30 years ago, you can see how far we’ve come,” says Danes. The best new projects, the study says, cluster 15 to 20 rooms together.

Common areas for socializing, such as small living rooms or kitchens, are included in each neighborhood. That gives residents a better opportunity to get to know their neighbors than they might have in a large building with only one big common area.

Connecting seniors
The sharp economic downturn and slow recovery may be at least partially responsible for one of the most notable trends. More retirement buildings are trying to connect their residents to existing services in the wider community, instead of duplicating them in-house. In the study, more than half of the best projects were located near stores, medical offices, and rail or bus stops.

“Isolated suburban campuses have tried to create everything from scratch,” says Danes, pointing to developments that include everything from movie theaters to libraries and ice cream shops. “Providers are asking: ‘Why not connect residents to resources that already exist?’”

The flip side of the trend is that retirement communities with a wide range of services are offering those same services to seniors who live in the greater area, the study says. It’s a way for buildings to improve their visibility among potential residents while boosting revenues.

David Schless, president of the American Seniors Housing Association, notes that building owners have to be more practical nowadays. They’re aware that consumers may not be willing to pay for a lot of fancy amenities. “The economy is having an impact,” he says.

Environmentally friendly building materials were used in 17% of projects, including non-toxic paints and recycled content. About 16% achieved water efficiency with reuse of rainwater, low-flow plumbing fixtures and special irrigation systems.

The Victory Centre at South Chicago was part of the Design for Aging Review in 2009. The two-phase, $40 million project includes an assisted living building and an apartment building.

The assisted living building opened in 2009. The apartment building opens this month. The Victory Centre is a project of Pathway Senior Living, a Des Plaines, Ill.-based for-profit developer of affordable seniors housing projects.

The Victory Centre’s assisted living building has received a Leadership in Energy and Environmental Design (LEED) certification, a designation that verifies a building project is environmentally friendly. There are four LEED levels: certified, silver, gold and platinum.

The Victory Centre buildings are part of a wider neighborhood redevelopment by the City of Chicago. The city’s goal was to have the entire neighborhood LEED-certified. The Victory Centre assisted living building received a silver LEED certification. The apartment building hasn’t been certified yet, but is expected to also have a silver designation.

Adding green elements to a seniors project is a smart business strategy, according to Pathway President Bob Helle. A well-insulated building is less experensive to run. The use of non-toxic paints may cost more initially, but may help avoid potential liabilities from residents who could get sick from toxic paints.

A green building can also be a marketing plus to potential residents, and their families, Helle says, though even a green building won’t command higher rents than other buildings.

The study shows that although many of the best projects include green elements, only 19% were actually certified as green or sustainable.

It’s not worth the expense of pursuing a LEED certification, especially on an affordable project where returns are small, notes Pathway’s Helle. Application and consulting fees for LEED certification can total $50,000 or more.

“The certification itself may not be the best use of funds.” Even so, Helle believes it still makes sense to use building practices that would qualify a project for LEED certification. “I endorse that without equivocation.”