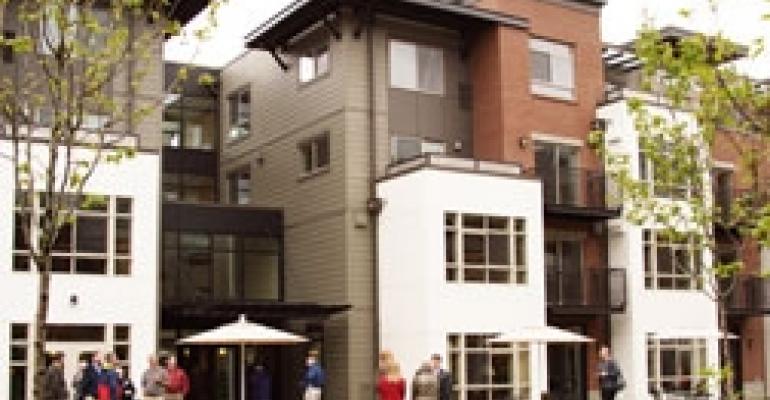 Building owners continue to spend on advertising and promotions to convince seniors to sell their homes and move. Concessions are widely available too, including free rent, moving expenses, and loans. As a last resort, some continuing care communities are even buying their customers’ old houses to fill vacant apartments.

“Owners and operators are fine-tuning programs,” says Michael Berne, managing director of the seniors housing group at Jones Lang LaSalle in New York. “The marketing intensity we had six months ago has continued.”

Driving the ongoing sales blitz is a sense of urgency among owners and operators to boost leasing activity. The average occupancy rate at independent living units fell to 90.2% in the fourth quarter of 2008 from a peak of 93.8% in the first quarter of 2007, according to the National Investment Center for Seniors Housing & Care Industry (NIC), which tracks 31 markets.

The biggest declines have been in hard-hit housing markets. The occupancy rate in Tampa’s independent living market, for example, declined 900 basis points from 95.6% in the first quarter of 2007 to 86.6% in the last quarter of 2008.

The occupancy rate at assisted living facilities also has dipped, from 91.5% to 89.4%. The decline hasn't been as steep as in the independent living sector because seniors who need assistance often are forced to move.

The housing market nationally is improving, albeit slowly, which is a welcome sign for seniors housing because the uptick helps boost foot traffic at retirement facilities. The index of pending home sales rose 3.2% in March, according to the National Association of Realtors. That was the second monthly increase after the index hit a record low in January. The index is now 1.1% above last year's levels.

That positive momentum on the housing sales front is having a ripple effect. The occupancy rate at Seattle-based Merrill Gardens, a seniors housing owner and operator with 54 buildings, bottomed out at 89% about 45 days ago. The privately held company's buildings, a mix of independent and assisted living projects, now boasts a portfolio-wide occupancy rate of 91%.

“In the last seven weeks, we've had a 22% increase in the number of deposits we’ve taken,” says Steve Delmore, executive vice president at Seattle-based Merrill. The number of returned deposits, a measure of cancellations, has declined.

The new 123-unit Merrill Gardens at the University opened a month ago in downtown Seattle. The property is 40% rented, a lease-up progressing more quickly than at Merrill's last two new properties where deal cancellations hit 30%. “We don't see that anymore," says Delmore, quickly adding that incentives are not off the table.

Emeritus Senior Living, an assisted living owner and operator, offers price breaks on deposits and other incentives as needed. But building tours and inquiries have picked up substantially from last fall when the economic crisis hit and consumer confidence plummeted.

“We are back to normal levels of move-ins,” says Granger Cobb, president and co-CEO at publicly traded Emeritus in Seattle.

Another positive sign: Seniors are more realistic about pricing their homes to sell. “They recognize they’re not going to get the same price for their house that their neighbor got three years ago when the real estate market peaked,” says Ron Aylor, senior vice president of sales at Brookdale Senior Living, with more than 51,000 units nationwide.

In order to demonstrate why it may not make sense to delay a move, the Nashville-based company has developed a “Housing Price Recovery Chart.” It shows that if homes are now worth 25% less than they were at their peak, it will take about 10 years for prices to rebound.

Assisted living communities are offering more shared suites as an option for seniors on a tight budget. At Emeritus buildings, rent for a shared room is about one-third less than for a private room. Promotions for shared suites have helped fill units in about half of the company's buildings, says Cobb at Emeritus.

Continuing care retirement communities offer the biggest concessions. Potential residents typically must sell a house in order to pay the large entry fee, which usually starts at about $200,000.

There have been more than 500 unit sales at the 19 communities operated by Erickson Retirement Communities since the beginning of the year. That’s up slightly from the same period last year, according to Tom Neubauer, executive vice president of sales at the Catonsville, Md.-based company. He characterizes sales as healthy, but not robust.

To keep sales on pace, the company launched Erickson Realty & Moving Services two years ago to help prospective residents sell their homes and move. The program has been tweaked along the way, and now covers moving expenses up to $3,000 per apartment in some markets. Real estate agents who bring Erickson new customers now receive a 2% commission.

Erickson also is holding home-selling expos at each of its 20 properties. The forums showcase about 30 vendors that provide seniors with advice on the entire moving process. Vendors include real estate agents, moving companies, downsizing experts and relocation firms, says Neubauer. “It gives people confidence they can sell their house and move.”