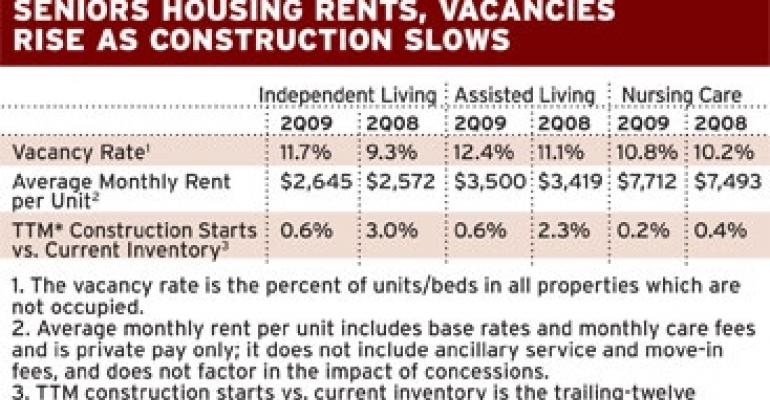 While vacancies at seniors housing buildings are still on the rise, so too are rents. And though concessions remain widespread, signs are emerging that vacancies may start to decline as new construction comes to a halt.

That’s the conclusion of the National Investment Center for the Seniors Housing and Care Industry (NIC) based on an analysis of second-quarter data in the nation’s top 31 markets. The results were released at NIC’s annual conference that occurred Sept. 23 through Sept. 25 at the Sheraton Chicago Hotel & Towers.

He explains that NIC’s rent figures are asking prices and do not include concessions. But he believes effective rents are still positive since building owners tend to use short-lived concessions, such as waiving the one-time move-in fee.

NIC had been reporting stabilized occupancy rates, but shifted to a vacancy rate that includes properties still in lease-up. "After two years of dialogue with the industry, this is what it wanted to see," notes Robert Kramer, president of NIC. "If you look at other classes of real estate, that's how vacancies are reported."

NIC's long-term goal, Kramer emphasizes, is to provide transparent data packaged in a way that makes it easy for investors to compare the performance of seniors housing to other commercial real estate sectors. "New investors can easily see the trends over time," Kramer notes.

Though asking rents are stable, widespread concessions are impacting the bottom line, says Michael Berne, managing director of the seniors housing group in the New York office of Jones Lang LaSalle. "The revenue for owners is less."

Incentives are still needed to attract residents, building owners and operators say. The housing slump has hit owners of independent living buildings particularly hard. Seniors who want to move in are having trouble selling their homes. Vacancies at seniors buildings vary by location, of course, but the most troubled housing markets have the most empty units.

The recession has hurt assisted living buildings too, where rents average about $3,500 a month. Seniors have seen their savings shrink. Adult children who often help their parents pay the bills may now find themselves unemployed. In metropolitan Detroit, for example, the unemployment rate rose from 7.3% in the first quarter of 2007 to 16.3% in the second quarter of 2009. During that same period, assisted living vacancies in the Detroit area rose from 10.5% to 19.2%.

Though concessions are still being used to fill empty units, discounts were deeper last year and more widespread, says Hargrave of NIC. Anecdotal evidence also suggests concessions are beginning to ebb. Seattle-based Emeritus now offers fewer incentives than it did the first half of the year. The publicly traded company is the nation's second largest operator of assisted living units.

Incentives offered earlier this year provided some "occupancy momentum," according to Granger Cobb, Emeritus president and co-CEO. At the end of the second quarter, the occupancy rate across its portfolio of 309 properties stood at 88.2%, up from 87.8% at the end of the first quarter.

Emeritus will not offer incentives in 2010, Cobb says, though he admits it's hard to wean property managers from discount programs.

Meanwhile, building owners are taking an incremental approach to rent hikes. Brookdale Senior Living, a Nashville-based company with 548 properties, has raised rents only at a few buildings, according to Ron Aylor, senior vice president of sales at the publicly traded firm. "We've been very cautious," he says.

Senior Lifestyle Corp. raised rents 2% last January. "We felt it was not the time for a big hike," says John Cobb, president and CEO at the Chicago-based company, a privately held owner and operator of 52 properties. The occupancy rate portfolio-wide is up 3.8% this year and now stands at about 90%. The company's assisted living buildings are 95% occupied. "Our goal has been to grow occupancy," notes Cobb.

Owners and operators are projecting higher returns in 2010. Many expect to raise rents about 5% to 6%. A recent pick-up in the pace of leasing has fueled that optimism. At Senior Lifestyle, for example, move-ins rose from approximately 170 per month last fall to about 200 per month during the summer. The company recorded its best month ever in terms of net operating income in August, says Cobb, though he declines to provide specific figures.

At Merrill Gardens, a Seattle-based owner and operator of 56 buildings, occupancies have risen to 93%, a rise of four percentage points since March. Rents at stabilized buildings with an average occupancy of 94% will probably rise 3% to 5% in 2010, a nice bump from the zero to 1.5% hikes of 2009. “The idea is to get back to normal rent increases,” says Steve Delmore, executive vice president at Merrill which has independent and assisted living properties.

The ongoing drop in construction activity should further bolster occupancies at existing buildings. In the independent living sector, construction starts in the second quarter of 2009 totaled 0.6% of the current available inventory, down from 3.0% in the same period in 2008, according to NIC. New starts in assisted living fell from 2.3% to 0.6%. And construction starts on skilled nursing facilities declined to 0.2% from 0.4%.

Still, in some oversupplied markets it may take several years to absorb the existing inventory. The number of independent living units under construction in Denver hit a high in the first quarter of 2008, representing 30.2% of existing inventory. The vacancy rate rose from 9.1% in the first quarter of 2007 to 18.9% in the second quarter of 2009. Denver was targeted several years ago by a number of developers including Erickson Retirement Communities, Classic Residence by Hyatt and Spectrum Retirement Communities.

The big drop in the number of new projects under construction nationally, however, bodes well for occupancies at existing seniors housing properties. Construction financing is scarce. And even when lenders return to the market it will take several years for the development pipeline to fill, notes Cobb at Emeritus.

In the assisted living segment, Cobb predicts three to four years of growing demand due to the combination of an aging population and little new supply. "Everyone will be full.”