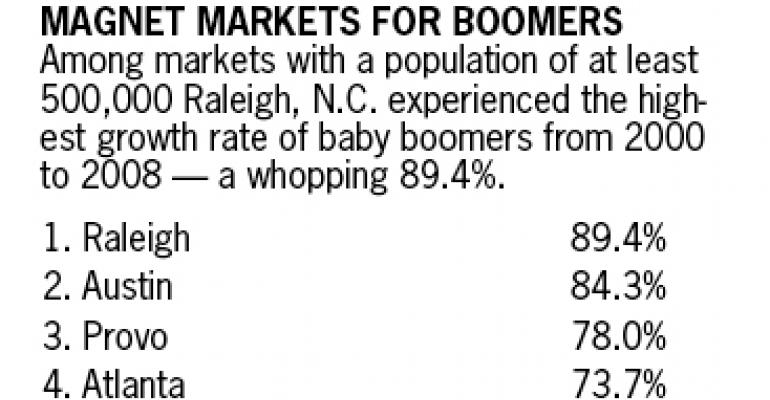 Baby boomers represent a tantalizing business opportunity for owners of seniors housing. After all, the first of the 75 million boomers turn 65 in 2011, nearing retirement age, and possibly a point in their lives when they may want, or need, a new place to live.

But not all aging Americans are alike, according to several demographers who spoke last week in New Orleans at the annual meeting of the Gerontological Society of America.
“People talk as if boomers are uniform,” says Greg O’Neill, director of the National Academy on an Aging Society. But, he adds, boomers vary widely in how and where they live.

The baby boom generation includes Americans born from 1946 to 1964, with the number of births peaking in 1957. But the second half of the boomers is a much larger group than the first half. Consequently, the big wave of people who might need assisted living services is still 30 years away.

Boomers aren’t distributed evenly geographically either, O’Neill notes. Most boomers live in Texas and California, with 8.9 million and 5.6 million boomers respectively. But these states don’t have the largest percentage of boomers since a state like California also has a big population of young people. As a percentage of population, boomers are tops in Vermont where they make up one-third of all residents.

Boomers on the move

Though the majority of boomers will remain in the communities in which they currently reside, O’Neill says the ones who do relocate are moving to places where jobs are being created. From 2000 to 2008, among metro areas with a population of 500,000 or more, the highest growth rate of boomers were Raleigh, N.C. (89%); Austin, Texas (84%); Provo, Utah (78%); Atlanta (74%); and Boise City (73%). The same cities also had the highest growth rate of those age 65 and older.

Somewhat surprisingly, four of the five slowest growing areas for boomers are in Florida. These markets include Bradenton, Cape Coral, Palm Bay, and Lakeland. Among the age 65 and older group, the greatest population declines mostly took place in northern rust belt cities, such as Scranton, Pa., and Buffalo, N.Y.

Boomers are different than previous generations, says O’Neill. “Today’s older adults are mixing up the places they move.” Boomers still like warm weather destinations, but they prefer college towns, such as Corvallis, Ore., the home of Oregon State University, or spots with outdoor amenities such as mountains or water.

For builders targeting the boomer market, another consideration is that boomers are more educated, healthier and much less homogenous than previous generations. They generally don’t expect to retire from work at age 65, and now, with the economic downturn, they may not be able to afford to do so until they are even older.

Complex social lives also are the norm among boomers due to late parenthood, remarriage, and their own parents’ longevity, O’Neill says. About a third of boomers are single, foreshadowing a rapid rise in single-person households.

Boomers could need a lot more caretakers, too. “The parents of the boomers were lucky to have them,” says O’Neill, explaining that the boomers provide a lot of support to their elders. But birth rates have dropped and the boomers, on average, have few children to help them out, which could impact the need for services and housing in the years ahead.

Another striking trend with implications for housing is that the older population is becoming much more diverse, according to Steven Wallace, associate director at the UCLA Center for Health Policy Research.

“Diversity is increasing,” notes Wallace. At the same time, about half of ethnic elders live in poverty, or just above the poverty line.

“There’s a misconception out there that everybody at 65 has their house paid off and no mortgage,” says Wallace. Senior homeowners still have to make home repairs and pay property taxes, he adds. “They don’t have free housing.” And, in California, for example, 25% of seniors still have a mortgage.

Still, non-Hispanic whites are more likely to live in nursing homes or assisted living facilities than other groups. A white female over the age of 85 is the typical resident of an assisted living facility. Older whites also are more likely to live alone than seniors of color. About 41% of white women age 65 and over live alone, while 30% of ethnic elders live with a relative.

While the changing makeup of the elder population will have an impact on housing policies and decisions, Wallace says one fact can’t be overlooked: “An ethnic wave is coming.”

Jane Adler wrote this article as part of her MetLife Foundation Journalists in Aging Fellowship created by New America Media and the Gerontology Society of America.