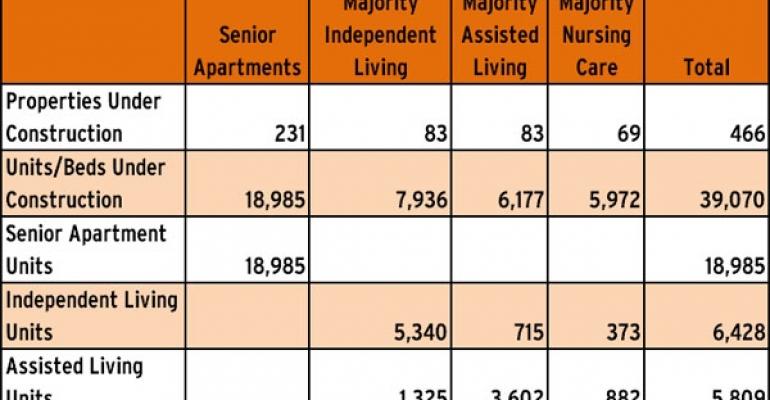 Construction starts of seniors housing and nursing care facilities are up over last year, but still remain well below the pre-recession peaks hit in 2008, according to a new industry report.

A total of 39,070 units were under construction at the end of March 2011, according to the Seniors Housing Construction Trends Report 2011. The units are distributed among 320 new properties and 146 expansions of existing properties. About half of the units are in seniors apartments, largely made up of subsidized buildings.

Construction of seniors housing, composed mostly of market-rate independent, assisted living and nursing care buildings, was up 55 percent year-over-year to 14,942 units. That total is still down 36.9 percent from the peak of more than 23,000 units in the year ending in March 2008.

“This is really a modest amount of new construction,” says David Schless, president of the American Seniors Housing Association (ASHA), which produces the annual report in collaboration with the National Investment Center for the Seniors Housing & Care Industry (NIC). “Until the capital markets change and the economy improves, we expect to see relatively muted levels of construction of market-rate seniors housing.”

Senior apartments make up 49 percent of units under way. (Only 8 percent of those are considered market-rate properties.) Independent living properties account for 20 percent of the new units, followed by assisted living (16 percent) and nursing care buildings (15 percent).

Despite the growing population of seniors who might want to move to a new retirement building, no one expects seniors housing to reach the construction levels hit in the 1990s during the industry’s period of greatest growth. In 1998, for example, the industry added about 57,800 new units (excluding senior apartments). “There was a real lease-up issue back then in a lot of markets,” notes Schless.

Over the last year, cautious lenders have kept new construction in check. But that could be changing, according to Michael Hargrave, vice president at NIC in Annapolis, Md. “There are some signs that banks are willing to consider construction financing.”

New assisted living projects are more likely to obtain construction financing nowadays than other types of buildings, sources say. Assisted living is generally considered a so-called “need-driven” product. In other words, the residents must change their living arrangements because they can’t manage on their own. In contrast, an independent living building usually appeals to seniors who can still live alone. But many seniors who might want to move into a new building can’t sell their homes because of the weak housing market.

“Looking forward, my expectation is that we are more likely to see assisted living and memory care places built,” says ASHA’s Schless.

Though nursing homes are also a need-driven product, don’t expect to see a lot of stand-alone nursing facilities being built. The federal government reduced its reimbursements to nursing homes starting this month for short-term stay patients. “There’s a lot of uncertainty with the skilled nursing market,” notes Schless.

Continuing care retirement communities (CCRCs) won’t experience a big upsurge either. Developers began construction on only 33 CCRCs in the last year because of the rocky housing market. Seniors typically use the proceeds from the sale of a home to pay the large upfront entrance fee required by these projects. CCRCs that opened during the downturn are still struggling to get residents. Some CCRCs have gone bankrupt. And a handful of new projects that had been on the drawing board have been scratched.

By metropolitan area, the construction report says Chicago ranked first in the number of new units with about 3,200 under way. A developer expanding in the Chicago area is Ryan Companies US. It announced plans in October to develop an 80-unit affordable senior apartment community in Orland Park, a southwest suburb of Chicago. This is the fourth affordable apartment project for seniors in the Chicago area by Ryan in the last three years.

After Chicago, New York had the second most units (1,781) under way. San Francisco ranked third with 1,657 units under constriction.

This number of units doesn’t represent overbuilding in these markets, says Schless. Big markets like New York and Chicago can absorb the product being built. He explains that the protracted problems the industry experienced in the 1990s happened in smaller markets where six or seven properties opened at the same time. Schless says, “That’s not what is happening here.”