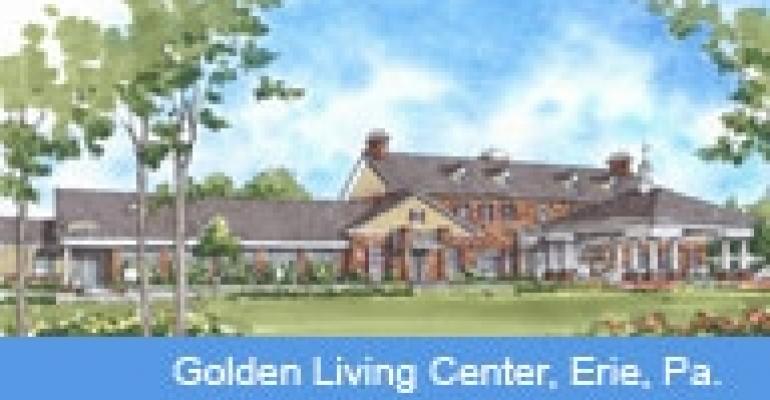 Billed as the nursing home of the future, a new 115-bed facility is under way in Erie, Pa., by Golden Living, an owner and operator of long-term care buildings. The facility will be divided into five distinct neighborhoods, each with its own country kitchen, private dining area and living room to create a home-like atmosphere.

"We had an opportunity to build a facility that represents what future [nursing homes] will look like," says Bill Meenan, division president at Golden Living's regional office in Pittsburgh.

Each room will include its own bathroom, plus a computer terminal and large-screen television. The building also features a main dining area, along with a large central atrium where residents can meet.

The project comes at a time when many existing nursing homes built in the 1960s and 1970s are becoming obsolete. Owners and operators want to replace these older structures with new buildings that reflect consumer preferences for a place that less resembles a hospital and feels more like a home.

The existing 28,000 sq. ft. nursing home was built around an old mansion in downtown Erie. The new $16 million, 72,000 sq. ft. Golden Living Center is being constructed just outside of town near a medical complex. The old downtown property will be sold.

The trend toward more home-like nursing homes started about 15 years ago when Dr. William Thomas founded the Eden Alternative, a model for nursing home change that emphasized a personal approach. Thomas has recently spearheaded the creation of small home-like skilled-nursing centers called Green Houses. About 40 Green Houses are scattered throughout the country.

Golden Living's new building is somewhat similar in concept to the Green Houses, says Meenan at Golden Living. But the Golden Living facility will have technologically advanced features, such as a computerized pharmacy. Rents have not yet been set.

The mix of residents at the Golden Living facility will vary a bit from traditional nursing homes. One neighborhood will be devoted to those with memory loss. The building also will serve those persons who need temporary care after surgery, or an injury.

Seniors housing owners and operators are expanding rapidly in this type of rehabilitative care as a way to grow revenues. "Over half of our residents will be short-term stay residents," says Meenan.

The facility also will serve as a base of operations for Aegis Therapies, a Golden Living company that will provide therapy to building residents and also to local seniors who live in their own homes.

Golden Living has more new buildings in the works. A project will soon get under way in Greenville, N.C. Several others are on the drawing board, according to Larry Deans, president at Golden Living, based in Fort Smith, Ark. The company has 328 facilities in 22 states, most of which are skilled-nursing centers.

San Francisco-based Fillmore Capital Partners, a private equity firm, purchased Golden Living in March 2006. Since then, Fillmore has invested $250 million in Golden Living. The company owns about 85% of the buildings it operates. Deans of Golden Living says that the ultimate goal is to own all the buildings, rather than lease them.

Golden Living plans to expand the service side of the business, too. "The demand for home care, hospice and therapy services is increasing," explains Deans, adding that those businesses are less capital-intensive than new building development.

Still, Deans would ideally like to replace 10 to 15 buildings a year with the new Golden Living prototype. While not all the existing buildings are obsolete, he admits that some should be replaced and others are not in ideal locations. "We are looking at this on an ongoing basis."