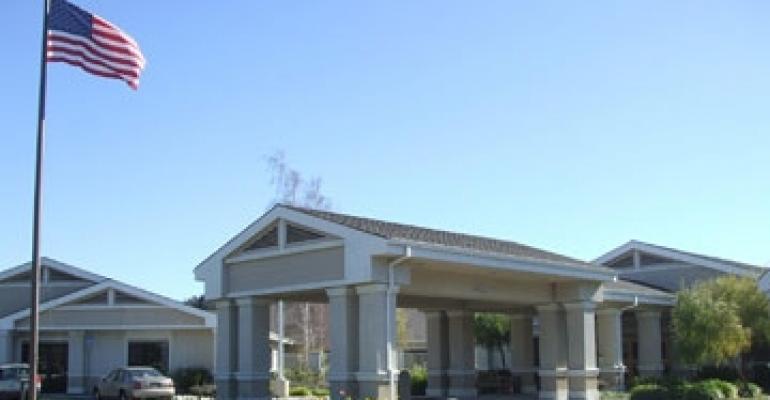 Making a bold statement in a recessionary environment, real estate investment trust HCP has purchased a $720 million stake in the first mortgage of HCR ManorCare, one of the nation’s largest nursing home owners and operators.

The debt was purchased at a discount of about $590 million, making it one of the biggest seniors housing deals so far this year.

The seller of debt, which was not disclosed, financed 72% of the purchase price. HCP contributed $165 million in equity. Stock analysts anticipate HCP’s levered rate of return will range from 21% to 27%, depending on when the debt is repaid.

The mortgage is secured by a first lien on ManorCare's 331 nursing homes in 30 states.

"It's a heads up we win, tails up we win transaction," says Tom Herzog, CFO at HCP based in Long Beach, Calif. He explains that HCP should do well whether the debt is repaid on schedule, or if HCP as the senior debt holder eventually ends up owning the buildings and leasing them back to ManorCare. "This puts us in a good position."

HCP (NYSE:HCP) is a healthcare REIT that owns hospitals, medical office and life science buildings along with 259 seniors housing properties. Most of those are either assisted living facilities or apartments for independent seniors.

HCP's investment has raised speculation about the eventual control of Toledo, Ohio-based ManorCare, considered by many to be the nation's premiere nursing home company.

In 2007, the Carlyle Group acquired ManorCare for $6.3 billion and took the company private in one of the biggest leveraged buyout deals before the credit crisis hit. HCP participated in that deal, purchasing $1 billion of junior mezzanine debt for about $900 million.

Ironically, in 2006 and 2007 HCP had reduced its ownership of nursing homes from 30% to 2% of its overall company portfolio.

HCP's recent purchase of senior debt could be a defensive play to protect its earlier investment, sources say. It's estimated that the mezzanine debt is now worth less than what HCP paid for it because of declining asset values.

HCP's investment in ManorCare now totals about $1.5 billion, or about 12% of HCP's current asset value, according to Green Street Advisors, a research and consulting firm based in Newport Beach, Calif.

The seller of the senior debt is believed to be one of the original leveraged buyout investment banks, either JP Morgan or Bank of America. HCP says it bought the debt at below market price with favorable financing.

"Even if (HCP) holds this paper and gets paid off, it appears they'll get an attractive return," says John Arabia, managing director at Green Street Advisors.

HCP's Herzog says ManorCare is performing well, with net operating income (NOI) growing 20% on a year-over-year basis. Both the Carlyle Group and ManorCare declined to comment for this story.

He admits, however, that it's difficult to gauge how ManorCare is performing since it is privately held. The big issue for ManorCare is "the capital side of the business and how much debt they have," he adds.

ManorCare has until 2013 to refinance its debt or pay it off. "We would be surprised if there were not an exit prior to that date,” says HCP's Herzog.

Some industry observers speculate that the Carlyle Group will take ManorCare public when the capital markets improve in order to raise equity and pay off debt. Or HCP could exchange its debt investment for ManorCare real estate. "This deal creates the opportunity for HCP to be paid in real estate instead of in cash," says Robert Mains, research analyst at Morgan Keegan in Saratoga Springs, NY.

Though HCP seems well positioned for now, healthcare reform looms as a potential risk. Some Medicare reimbursements for nursing homes have already been reduced, while the U.S. Congress contemplates broader reforms that could change how nursing homes are paid. "Healthcare reform is a moving target,” says HCP’s Herzog. “It's something we're watching."