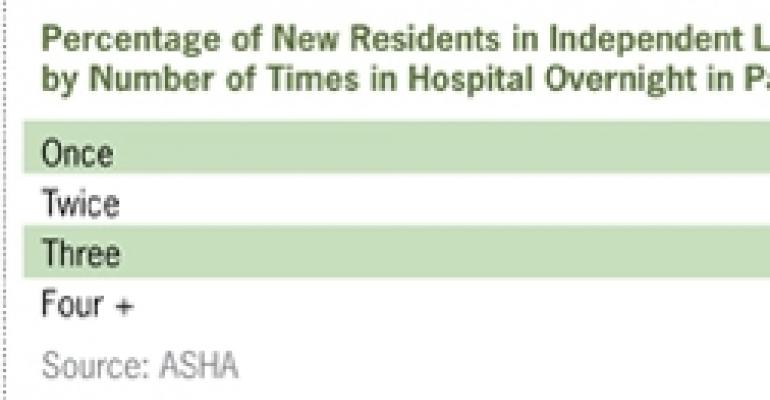 New residents of independent living buildings are generally outgoing, usually hear about the community from a friend, and are likely to have been hospitalized in the last two years. Those are some of the results of the "Independent Living Report," a new study just released by the American Seniors Housing Association based in Washington, D.C.

“This was an extensive study," says Davis Schless, president of ASHA. “We wanted to see who should be targeted as good candidates for independent living. The report provides excellent insights into why people move and what they want.”

The 50-page survey sampled about 900 seniors who had moved into an independent living apartment in the last six months. Independent living facilities are age-restricted rental buildings that typically offer some services including meals, housekeeping, transportation and activities. The buildings do not provide help with activities of daily living, such as dressing and bathing.

Among the report’s highlights:
• Location is the single most important factor in choosing a community. Residents want to be close to family and friends.

• Just over 50% of new residents had been hospitalized in the last two years, indicating they sought a supportive living arrangement with services such as meals.

• About 37% of new residents had long-term care insurance, a much higher percentage than the general population.

• Some 70% of respondents said their experience at the new building exceeded their expectations.

• Nearly two in three residents (64%) learned about the community by word of mouth.

• Residents of larger, newer communities were more satisfied than those in smaller, older ones.

• The more help a resident needed with activities of daily living, the less likely he or she was to be satisfied.

The report comes at a time when occupancy rates at independent living buildings are dropping and owners are trying to find ways to attract new residents.

Also, residents were likely to be socially engaged and people-focused. A small percentage of people will never be convinced to move to an independent living building and probably aren't worth targeting, says Schless of ASHA. "They're okay being alone."

High satisfaction levels among residents are key to the community's long-term success, the study notes. Those who visited the community three to four times before moving in were more satisfied than those who made fewer visits.

Multiple visits provided an opportunity for building managers to answer questions from potential residents. “Operators could really improve their market share by communicating with prospects about their concerns,” says researcher Wylde.

Advertising and direct mail are effective marketing tools during lease-up. But after the second year, 68% of new residents stem from referrals by other residents or family members. "Word of mouth is very important," says Wylde.

Satisfaction came from features such as flexible dining schedules and good food. But probably more important was the quality of the staff. "Building owners and operators need to recognize how important their staff is," notes Wylde. "The key point is to get people in the building and keep them happy."

In general, the seniors housing industry is adept at developing beautiful buildings and great advertising, but not at providing superb customer service, concludes Wylde. "We need to focus on the customer and [building] staff."

ASHA plans to release other reports later this year based on the survey data collected. The current study is available for purchase by accessing ASHA's Web site: www.seniorshousing.org.