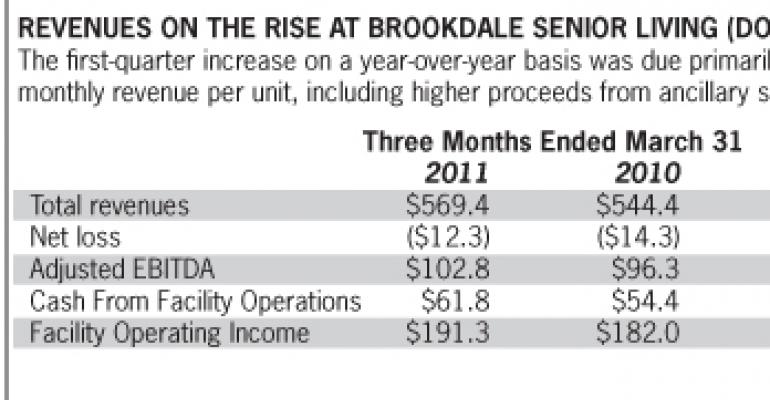 With the seniors housing market poised to improve, big investors continue to favor deals that provide a share of building profits. The most recent evidence is the $47 million deal announced this month by Brookdale Senior Living to purchase property manager Horizon Bay Realty. It operates a 90-property portfolio with 16,000 units in 19 states.

In a complex transaction, Brookdale will revise Horizon Bay’s lease agreements on 33 of the properties owned by HCP, the big health care REIT based in Long Beach, Calif. Brookdale plans to form a joint venture with HCP to own and operate 21 properties. Nashville-based Brookdale will lease the remaining 12 buildings from HCP.

The joint venture will use a partnership structure made available under the REIT Investment Diversification and Empowerment Act (RIDEA) of 2007. It allows REITs to keep a share of the building’s operating income. Brookdale will acquire a 10% interest in the joint venture, which will capture the net operating income from the portfolio.

“The hope is that we are at a point in the cycle when occupancy and rental rates are rising,” says Jerry Doctrow, an analyst and managing director with St. Louis-based investment bank Stifel Nicolaus & Co. “But there’s always a risk.”

The deal is expected to close by Aug. 1. Thilo Best, CEO of Tampa-based Horizon Bay, will join Brookdale as executive vice president and chief investment officer.

The 21 properties in the joint venture have a total of 5,070 units. Most of the properties are located in Florida, Texas, Illinois and Rhode Island. About 4,200 of the units are independent living apartments, a sector that has shown weakness during the downturn.

Occupancies at the properties included in the joint venture were not available. But the average occupancy rate at independent living buildings nationwide is currently 87.7%, according to the National Investment Center for the Seniors Housing & Care Industry.

In contrast, assisted living properties have performed better with a current average occupancy of 88.4%. Experts attribute the difference to the fact that assisted living arrangements are often necessary whereas independent living apartments are usually only rented by seniors after selling their homes. The weak residential housing market has prevented, or discouraged, many seniors from making a move.

Canadian-based Chartwell Seniors Housing Real Estate Investment Trust owns 45 of the communities. Brookdale said in a press release that it expects to restructure its relationship with Chartwell, but provided no details. Chartwell declined to comment for this story.

The transaction respresents HCP’s first RIDEA venture. It will account for about 4% to 5% of the company’s net operating income, notes analyst Doctrow at Stifel Nicolaus. “HCP is being cautious.”

By comparison, Ventas, the big health care REIT, derives about 25% of its income from RIDEA structures. Ventas first used a RIDEA structure with the 2007 purchase of Sunrise Senior Living REIT of Toronto.

Toledo-based Health Care REIT gets about 10% of its income from a string of relatively recent RIDEA deals, including ones with Merrill Gardens and Benchmark Senior Living, among others.

Brookdale’s stock dropped $1.01 per share following the announcement by Horizon Bay on June 1. “It had nothing to do with the Horizon Bay deal,” says Robert Mains, research analyst at Morgan Keegan in Saratoga Springs, N.Y. Instead, he says, Brookdale simultaneously lowered its earnings outlook for the second quarter based on lower occupancies.

“It’s probably a reflection of a weak May for them,” says Mains. Brookdale’s stock, which trades on the New York Stock Exchange under the symbol BKD, has rallied this year. The price per share closed at $23.34 on June 17, compared with $16.92 a year ago.

Looking ahead, Brookdale plans to introduce its ancillary services to the Horizon Bay buildings, another opportunity to generate added revenue. Brookdale expects returns on its invested capital of 35% to 40% per year over the first three years.

The likely candidates are the big seniors housing companies with more than 2,500 units that have not been bought yet, according to Doctrow, the analyst with Stifel Nicolaus. “There’s still a lot of real estate out there.”