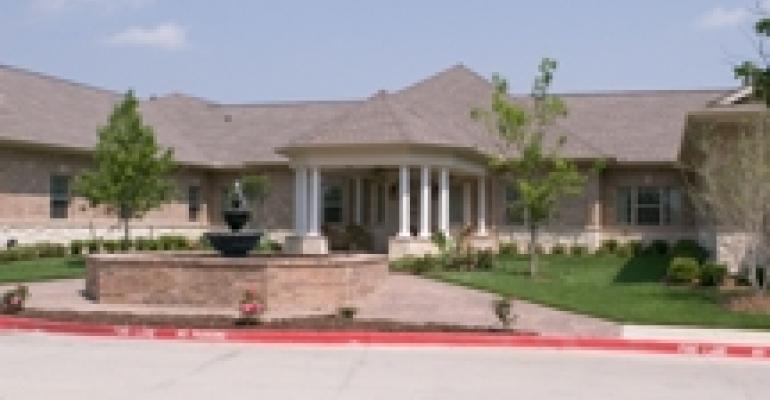 In search of a sure bet in uncertain times, investors are turning their attention to housing for persons with dementia. While many seniors stay put in their own homes until the resale market rebounds, elderly persons with severe memory impairments usually cannot age in place. Nursing homes, assisted-living and dementia-care facilities are often the only housing alternative for those who need round-the-clock supervision.

The LaSalle Group plans to capitalize on the trend. The Irving, Tex.-based company develops and owns nine Autumn Leaves dementia-care facilities. Seven buildings are in the Dallas area, with two in the Chicago area. Another building is under way in the Chicago suburbs, with plans to build three more there. A facility is also under way in the Dallas area. The company plans to expand to Houston in the near future.

"We saw that memory care was growing," says Mitchell Warren, president at the LaSalle Group, a privately held, family-owned business that started out 15 years ago in the multifamily market and opened its first dementia-care building in 2000. "Memory care is where we are expanding."

It's estimated that as many as 5.2 million Americans are living with Alzheimer's disease, a major cause of dementia. About 10 million baby boomers will develop the condition, says the Alzheimer's Association.

According to the American Seniors Housing Association, memory-care units account for about 6% of all seniors housing units now under construction. There are 510 dementia care units being built in freestanding properties. About 2,100 units are under way in combined properties, such as assisted-living and continuing-care projects.

The buildings are operated by Constant Care Management Co., which until recently was a wholly owned subsidiary of the LaSalle Group.

A typical building has 45 units. About 90% of the rooms are private. Rooms are clustered in neighborhoods that circle the common areas. Each neighborhood has a theme, such as sailing, to help residents remember where their room is.

Each building includes a staff of about 30 full and part-time employees. The development cost of a building in Texas is about $8 million. The Illinois buildings are about $10 million because of higher land costs. Properties are set on about 3 to 5 acres.

For new developments, Warren looks for suburbs with a large population of high-income individuals in the 35-55 age group — the adult children who make the decision to move a parent to a dementia-care facility. He also prefers suburbs with a solid population of seniors, though their income is not a factor.

Room rates in the Chicago area average about $5,900 a month; rates in Texas are about $4,900 a month. Prices are all inclusive, unlike many assisted-living buildings that offer tiers of pricing based on the number of services used.

Autumn Leaves is only private pay. About 20% of residents have long-term care insurance, says Warren. That compares to about 5% of residents 10 years ago. "The way people are paying is changing," says Warren, who adds that families are paying more of the cost nowadays because of the economic downturn.

Properties open for more than a year are 95% occupied. A typical property takes 12 to 14 months to lease. "Our occupancies have never been higher," says Warren. Because of strong leasing, rents were raised last year. "This business is still doing well."

As a result, Warren says the company hasn't had trouble attracting equity investors. The facilities are typically financed with 20% equity from private funds or individuals.

"The debt side is tougher right now," admits Warren. He works with local banks, as well as with government entities such as the HUD Section 232 loan program, which finances new assisted-living buildings.

As a hands-on owner, Warren plans to hold the buildings as he expands the brand. "Our plan is to stay in this business."