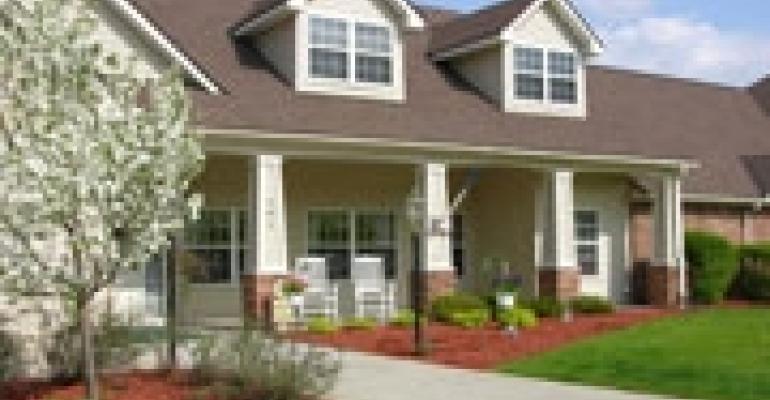 Property sales may have slowed to a crawl, but a recent $100.8 million sale shows that some investors think it's still a good time to buy. Care Investment Trust of New York purchased 12 buildings totaling 569 units in late June from affiliates of Eby Realty Group, which operates the buildings through its subsidiary Bickford Senior Living.

Five of the properties are located in Illinois, another five are in Iowa and the remaining two are in Indiana and Nebraska.

Bickford will continue to operate the assisted living buildings under a 15-year sale-leaseback agreement. All the properties were developed by Bickford within the last 11 years and their average occupancy is above 90%.

"The Bickford assets are quality assets," says Scott Kellman, Care's president and CEO, whose office in is Ann Arbor, Mich.

Purchased at an 8.2% cap rate, the transaction was funded with cash and a Fannie Mae mortgage of $74.6 million at 6.85%. Kellman says the terms are favorable for his company, which should limit the volatility of the return even if the seniors housing market performs poorly. The mortgage was arranged by Red Mortgage Capital.

Lately, investors have been skittish about purchasing seniors housing. The downturn in the single-family home market has made it more difficult for seniors to sell their homes and move to rental buildings.

Due to the disruption in the capital markets, relatively few buildings have traded hands. Investors are sitting on the sidelines, unsure of building values. "You have to have your own view of value," notes Kellman.

Despite the slowdown of building sales, the Bickford portfolio included multiple bidders, according to Joe Eby, COO of Bickford in Olathe, Kan. "We got a good price." Also, Bickford can achieve an earn-out of $7.2 million if the property meets certain performance thresholds in the first two years.

The Eby family launched Bickford Senior Living in 1991 to provide a place for their grandmother, Mary Bickford, to live. The company currently operates 37 buildings. It owns 13 properties and operates 23 under long-term leases, and one is managed only. Eby doesn't plan to sell other buildings at this time. No other new projects are being planned.

Care wants to buy more buildings, Kellman says. "We would love to have relationships with other quality operators."

CIT's expertise and experience in healthcare provide a big advantage, however, Kellman says. "It was logical for (CIT) to spin out a healthcare REIT."

But Kellman isn't a fan of skilled nursing centers, even though most residents are there out of necessity. Nursing homes are highly dependent on Medicare and Medicaid payments. State budgets are tight and Kellman says it's hard to know if reimbursement rates will increase going forward. Also, many nursing homes are older buildings that need to be renovated.

Care's medical office buildings are less than four years old, or have been upgraded, according to Kellman. "We have strong physical plants. Going too heavily into skilled nursing would denigrate the quality of the portfolio."