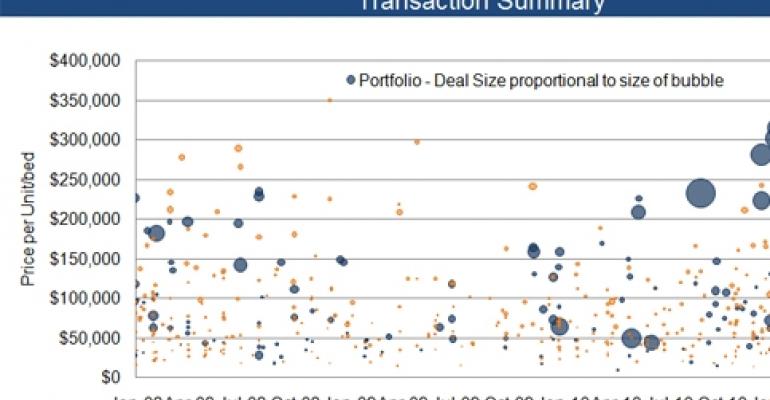 While detailed transaction information is generally available for the major commercial real estate sectors, data on deals in seniors housing has been hard to find because it’s still a relatively young investment class.

But a new report designed to provide investors with comprehensive transaction data on seniors housing and nursing homes was introduced last week in Washington, D.C. at the annual conference sponsored by the National Investment Center for the Seniors Housing & Care Industry (NIC).

The first-of-its-kind report provides information on seniors housing that wasn’t previously available, including data on sales volume by quarter, cap rates, and details on individual transactions, along with top buyers and sellers.

“Our intent is to provide capital market trends on the seniors housing and care sector,” says Chuck Harry, director of research and analysis at NIC, Annapolis, Md. “Comprehensive data on transactions didn’t exist before.”

The first edition of the report shows that property sales volume in 2011 has risen sharply due to the flurry of buying activity by the health care REITs. Sales totaled $16.8 billion at the end of the second quarter.

Also, cap rates have been moderating over the last few quarters, the report states, now averaging a little more than 8% for independent living and assisted living properties. Cap rates peaked at about 10% in 2009. (The “cap” or capitalization rate is the ratio between the net operating income produced by an asset and its capital cost.) Nursing home cap rates have also been falling, but still remain relatively high at a little more than 12%.

“Property prices are gaining traction,” notes Harry. Per unit prices have been moving up since the fourth quarter of 2010. Seniors housing properties, consisting of assisted and independent living buildings, had an average price per unit in the second quarter of 2011 of $132,300. That represents a 51% increase over the same period a year ago. Nursing homes also experienced a price hike in second quarter with units selling for an average of $60,300, an 11% increase from the same quarter last year.

Nursing care properties saw rental rates increase 3.3% in the second quarter compared to a year ago, with an average monthly rent of $8,023.

Seniors housing occupancy rates have fallen from around 90% in the first quarter of 2008, but have been relatively flat in the last several quarters and are now at about 88%. Nursing home facilities have experienced a similar occupancy decline over the last three years with the current nursing home occupancy rate at 88.4%.

The low level of new construction is helping to keep rental rates rising and occupancies rates from falling further. The absorption of units has also outpaced the addition of new units.

The report also charts the composition of buyers. So far in 2011, publicly-listed REITs are the dominant buyers. The REITs purchased 78% of the assisted living properties, 93% of the nursing homes, and 88% of the independent living properties.

By comparison, the biggest buyers of all types of commercial real estate were institutions with 37% of the total. Institutions accounted for just 4% of all independent living property sales so far in 2011.

“There’s still more opportunity for institutional buyers in seniors housing,” notes Harry. He also expects the REITs to continue to buy properties, but at a somewhat slower pace. He says: “The dollar volumes will subside because so many big deals have already been done.”