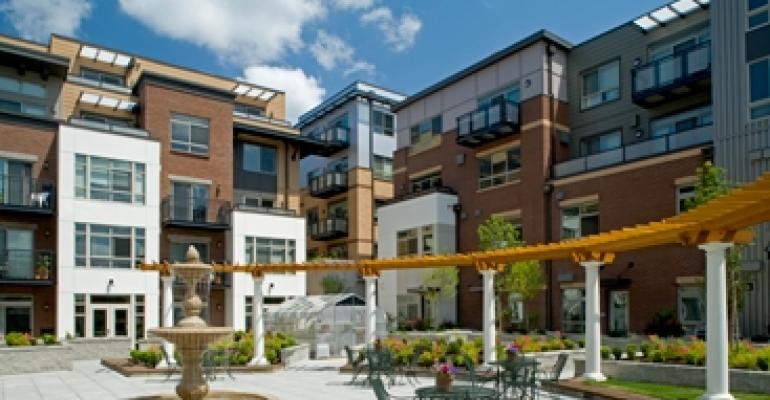 The downturn in seniors housing isn’t over just yet, according to a new report by the National Investment Center for the Seniors Housing & Care Industry (NIC). Several more quarters of flat or falling occupancies are expected as new buildings continue to open, though industry fundamentals could improve significantly in the next 12 months if the economic recovery continues.

“We’re bumping along the bottom,” says Michael Hargrave, vice president at NIC based in Annapolis, Md. “There are a lot of economic pressures out there.”

The big, publicly traded seniors housing companies reported similar occupancy levels in the first quarter. Brookdale Senior Living (NYSE:BKD) had an average occupancy of 86.6%, a drop of 10 basis points from the fourth quarter of 2009, and flat compared with the year prior.

At assisted living company Emeritus Corp. (NYSE:ESC), occupancy across the portfolio in the first quarter averaged 87.2%, an increase of 110 basis points year over year, and up 0.1% from the previous quarter.

Building owners report a recent uptick in leasing activity, though occupancies are being held in check by new building openings. Construction on facilities that began in 2007 and 2008 when financing was readily available are just opening.

“The industry is dealing with building deliveries now,” notes Hargrave. Last year, the seniors housing inventory for independent and assisted living properties grew by about 9,500 units. During the same period about 2,600 units were absorbed.

Property owners can expect more of the same in the months ahead. About 8,800 seniors housing units are under way and most will open this year. Construction has slowed because of the downturn, but new inventory will grow by 1,000 to 2,000 units quarterly until the end of 2010. Absorption has been somewhat erratic, but has recently averaged about 750 units a quarter.

If demand picks up with about 1,000 units absorbed a quarter, Hargrave predicts that occupancies will stabilize. If absorption hits 2,000 units a quarter, he believes that “things will start to get healthy pretty quickly.”

Another plus is that new project starts have slowed to less than 1% of the current inventory, NIC says. “There’s little financing available for new construction,” notes Philip Brooks, senior vice president of the senior housing group at Berkadia Commercial Mortgage Co. based in Richmond, Va.

Even if a developer decides now is the time to start a new project, Brooks says pre-construction planning could take as long as two years because of the lengthy municipal approval process.

Rents are slightly positive, the NIC report says. The average monthly rent at independent living buildings was $2,700 in the first quarter, a 1.5% hike from a year ago. Assisted living rents averaged $3,500 a month, up 1.4% from the previous year. “Properties are pretty much holding rents steady,” says Hargrave.

At Seattle-based Merrill Gardens, rents in 2010 are up 4% to 5% in most markets. The owner/operator has 56 properties that combine independent and assisted living units. In 2009, rents rose about 1% to 2% at half the properties.

The other buildings had no rent increases. “Residents view this year’s rent increases as catching up,” says Bill Pettit, president at Merrill Gardens.

The average occupancy rate at Merrill Gardens buildings hit a low of 89.7% in the first quarter of 2009. Most buildings began offering concessions, typically waiving the community fee, equal to about a month’s rent. By the end of 2009, occupancies had bounced back to 93%.

But concessions were subsequently discontinued, and the average occupancy rate at Merrill Gardens dipped to 91.8% at the midpoint of the first quarter. Leasing activity picked up, however, and the quarter ended with average occupancy at 92.5%.

“I think we’ll see choppy occupancy numbers in the industry until everyone weans themselves from concessions,” says Pettit.

Merrill Gardens opened a new building last May in Seattle. Merrill Gardens at the University is an intergenerational project with 124 seniors apartments and 103 non age-restricted apartments, mostly occupied by students.

The project also includes 20,000 sq. ft. of retail space. The seniors units are 75% occupied and the student apartments are 98% leased. The retail space is 88% leased.

Merrill Gardens also started a new project last January in San Diego. Pettit says that another property in Kirkland, Wash., is undergoing an expansion. “We expect a period of high sustained occupancies.”