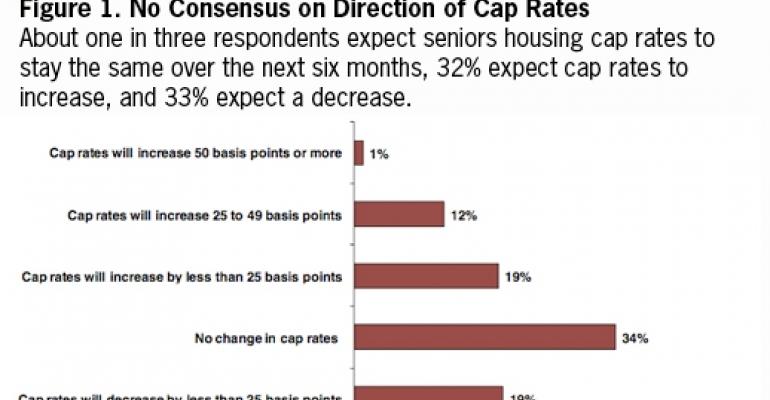 While the conventional wisdom in the seniors housing industry is that capitalization rates are clearly headed downward, the results of a newly released study conducted by NREI and Senior Housing Investment Advisors show a much murkier outlook.

Nearly one in three respondents (32%) to the e-mail survey expects cap rates to increase over the next six months compared with 33% who expect them to decrease [Figure 1]. About one in three respondents believe that cap rates will stay the same. (The cap rate is the initial return to an investor based on the annual net operating income of the property and the purchase price.)

“Cap rates are all over the map and depend on whether the property is stabilized, where it is geographically, whether it’s assisted living or independent living, or a combination,” says Eric Davidson, co-chief executive officer of Vintage Senior Living in Newport Beach, Calif. How wide ranging are cap rates today? Try anywhere from 6% to 10% in California, adds Davidson.

Vintage Senior Living operates 23 seniors housing communities in California and one in the state of Washington. About 60% of the beds in its portfolio are dedicated to assisted living, 30% to independent living and 10% to memory care. Vintage Senior Living has an ownership interest in about 3,100 of the 3,400 units it operates.

Cap rates for institutional-quality, Class-A product in California, which were in the 7.5% to 8% range a year ago, have dipped to the 6% to 7% range today, says Davidson. That’s because a lot of capital is chasing best-in-class properties.

“For anything else — anything not stabilized or in a bad location or whatever— cap rates are quite a bit higher and seem to be staying stable,” explains Davidson. Properties that fall into that bucket trade at a cap rate of approximately 10% in California, he adds.

Noah Levy, managing director of Prudential Real Estate Investors based in Parsippany, N.J., says that the combination of abnormally low interest rates and an abundance of capital targeting the sector has driven down cap rates.

“What’s really happening is a flow of funds — including a lot of private and public equity — has in essence compressed cap rates back again after an obvious widening,” explains Levy. “So some of this may be a capital flow phenomenon more than a real estate fundamentals phenomenon.”

But if the Federal Reserve at some point starts raising interest rates either because of inflationary pressures or an improving economy, then “there is a strong philosophical contingent that believes cap rates have to go up,” adds Levy.

REITs on a roll
Health care real estate investment trusts (REITs) accounted for more than 90% of the sector's buyer composition early this year, according to industry experts, helping to bid up the prices of Class-A facilities.

In the NREI study, slightly more than six in 10 respondents (62%) indicate that the increase in mergers and acquisitions activity by health care REITs over the past six months is due to the substantial amount of capital the REITs have available to deploy. Another 44% cite favorable industry fundamentals, and 23% point to the REITs’ need to grow funds from operations [See Figure 2].

The REITs have certainly helped raise the profile of the seniors housing industry by engaging in a number of mega deals, but they aren’t the only aggressive buyers. Mel Gamzon, president of Fort Lauderdale, Fla.-based Senior Housing Investment Advisors, says transaction activity by dollar volume in his shop has risen by more than 50% in the last 12 months.

Much of that growth has come from private buyers of single assets and portfolios in the $20 million to $200 million range, below the radar screen of the major health care REITs. He expects the velocity of investment sales to further increase as the U.S. economy improves.

“The good news generally is that the need-based, private pay nature of this sector will become increasingly compelling in future years as health care reform takes hold,” says Gamzon.

Borrower challenges
Despite improvement in the debt financing market as evidenced by the uptick in commercial mortgage-backed securities issuance this year, survey respondents are keenly aware of how difficult it is for many borrowers to get their properties refinanced.

Slightly more than four in 10 respondents (41%) indicate the lender requirement that is most challenging for a borrower to fulfill when seeking to refinance a loan is the higher equity contribution [Figure 3].

One-quarter of respondents cite higher debt-service coverage ratios as the most challenging requirement to meet, followed by 22% who point to recourse loans and personal guarantees as the biggest hurdle borrowers need to clear in order to refinance.

— A more detailed analysis of the seniors housing research findings will appear in the August/September issue of NREI.