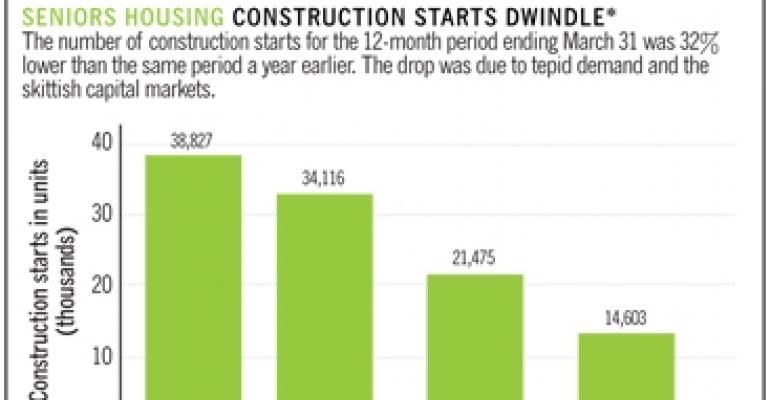 Although the U.S. economy is still sputtering and the capital markets remain skittish, the worst is probably over for the seniors housing industry, according to several new reports.

Occupancy rates that had been falling have stabilized, and rents are still growing, albeit slowly. Meanwhile, the lack of new construction bodes well for leasing at existing properties as demand from consumers continues to gain strength.

Several industry reports released at the conference point to some positive trends, including new data showing the seniors housing industry weathers downturns better than other types of commercial real estate.

As of the fourth quarter of 2009, the seniors housing sector generated a cumulative return of 2.7 times its mid-2003 value, according to the National Council of Real Estate Investment Fiduciaries (NCREIF).

By comparison the entire NCREIF Property Index, which includes all types of commercial properties, posted a cumulative gain of 1.5 times its mid-2003 value.

Separately, new construction of seniors housing properties has declined dramatically, according to the “Construction Trends Report for 2010,” prepared by the American Seniors Housing Association (ASHA) and NIC.

The report tallies only 129 new seniors housing project starts in the last year, along with expansions of 58 existing projects. “This is a very modest level of construction,” notes David Schless, president of ASHA. Today’s construction level is 32% less than the previous year, and down 57% from two years ago.

The Dallas area has the most construction activity, with 2,332 units under way. New York has 2,018 units under construction. San Francisco and Chicago have the next highest levels of construction, with 1,186 units and 1,692 units respectively.

The construction of continuing care retirement communities (CCRCs) also has slowed, mostly due to the difficulty of financing these projects which feature several different types of housing and care on one campus.

CCRCs are often financed with tax-exempt bonds, which have been less available since the downturn. A year ago, CCRCs represented 22% of all new seniors housing units under way. Now CCRCs comprise 13% of the total number of units under construction.

Occupancies at seniors housing facilities —including assisted and independent living — have stabilized. Among the top 31 markets tracked by NIC, the occupancy rate peaked in early 2007 at 92%. But by the first quarter of 2010, the occupancy rate had dipped to 87.6%, a decline of 440 basis points.

In the second quarter of 2010, the occupancy rate in those top 31 markets ticked up slightly to 87.7%. “We’re bumping along the bottom,” says Michael Hargrave, vice president at NIC.

Demand for units rebounded quickly last year. Defined as the change in the number of occupied units, demand had been growing at an annual rate of 1.6% prior to the recession. Demand was flat during the downturn, but it is currently growing again at an annual rate of 1.7%. “A demand-led recovery is what the sector needs,” says Hargrave.

Despite the V-shaped recovery in demand, the outlook for occupancies remains clouded because new units are being added to the market. In the second half of the year, 4,360 units are slated to open, well above the 2,287 units absorbed in the first half of the year.

Absorption did outpace new supply in the second quarter, however. For the sector to hit its all-time occupancy peak of 92% by the end of 2011, absorption would have to average about 5,000 units a quarter. The highest quarterly absorption was 3,759 units in the last quarter of 2005.

Other headwinds include the continued weak housing market and high levels of unemployment. “The recovery of occupancy will be slow and gradual,” notes Hargrave.

Asking rents have remained positive, however, according to NIC. Rents were growing at a rate of about 4% annually in 2007. The decline in occupancies has slowed rent growth to its current level of 0.7% annually.

NIC’s Hargrave is quick to point out that asking rents in seniors housing are still positive in contrast to other commercial real estate sectors, which have experienced a drop in rents during the downturn.

At the conference, NIC also introduced the executive summary of the “NIC Investment Guide 2010: Investing in Seniors Housing & Care Properties.” The report, which will be available in its entirety in late October, pulls together the latest research from various sources and evaluates the risks and opportunities for investors in the sector.

NIC’s Investment Guide includes a seniors housing index developed in conjunction with NCREIF, which compares performance among the various property sectors. “This is a benchmark moment for the seniors housing industry,” notes Kramer, who emphasizes how far the industry has come in a short time. “We have the data and it speaks for itself.”

Seniors housing has outperformed other commercial real estate sectors during the downturn because those who move into a seniors facility usually require some services. In other words, they can’t always put off a move, according to NIC’s Kramer. “Seniors housing has been resilient.”